Just trying to be as consistent as possible: Ruturaj Gaikwad

Gaikwad scored 108 from 131 balls in the final as he once again stood tall for Maharashtra to take them to 248/9. 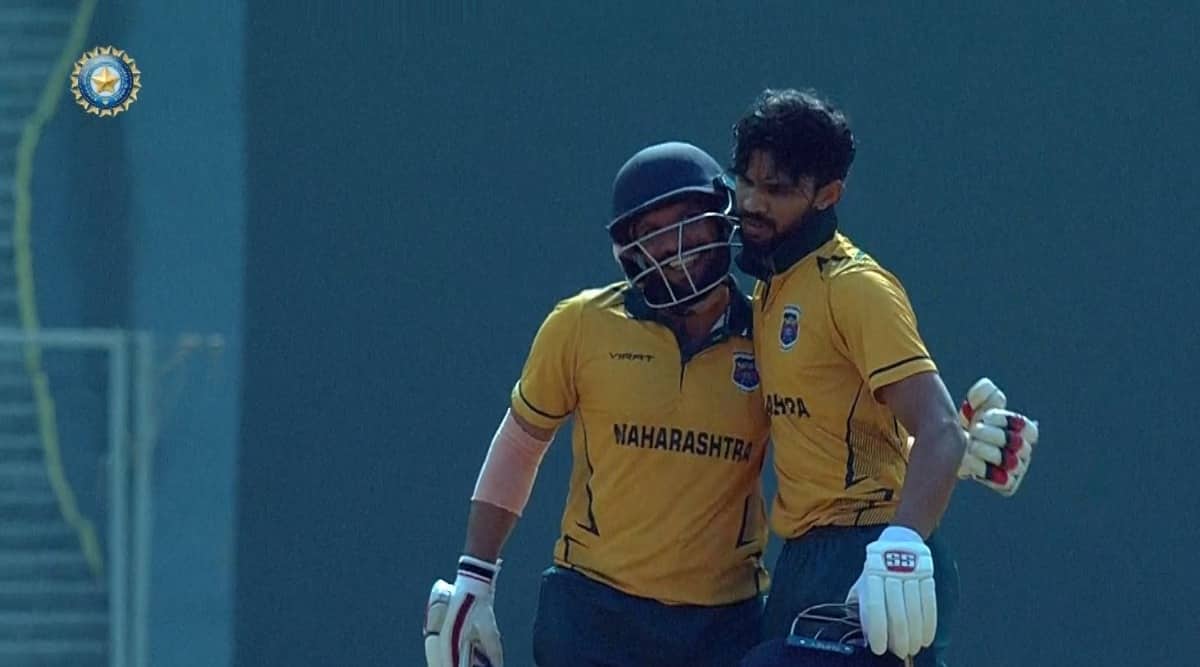 "I'm just trying to enjoy the game and stay in the present, looking to give good starts and then convert them into big hundreds. I'm just trying to become as consistent as possible," Gaikwad, who was adjudged Player of the Series, said after they lost the final to Saurashtra by five wickets. (Twitter/BCCI Domestic)

In the form of his life, Maharashtra skipper Ruturaj Gaikwad on Friday said being consistent and converting his starts into big hundreds has been his focus as they finished runners-up in the Vijay Hazare Trophy after making their maiden final.

Gaikwad slammed four hundred from five innings including a double century to finish with 660 runs at an astounding average of 220.

“I’m just trying to enjoy the game and stay in the present, looking to give good starts and then convert them into big hundreds. I’m just trying to become as consistent as possible,” Gaikwad, who was adjudged Player of the Series, said after they lost the final to Saurashtra by five wickets.

Gaikwad suffered an injury during the season and could not play all the matches for Maharashtra.

“It was important for me to get back well from injury. Had to lead from the front, being a senior player and an experienced player,” he said.

Gaikwad scored 108 from 131 balls in the final as he once again stood tall for Maharashtra to take them to 248/9. But the total was not enough as Saurashtra cruised to the target in 46.3 overs with five wickets intact.

“The kind of bowling they had, and the lines/lengths they bowled, it was challenging and I was enjoying it. Had to make sure that I’m staying calm,” he said.

Gaikwad further said the wicket eased out when Saurashtra batted so it was a good toss to win for them.

“There was a lot of difference in the pitch during the second innings. If we got the same conditions, things could have been different.

“After 25 overs of our innings, the pitch eased out but we were always behind the game due to that start. We could have got to 300 or 320-330 if the surface was better from the start,” he said.

“Obviously, toss played a huge factor as we were always behind in the game. It was a 70-30 advantage with the toss but credit to the Saurashtra bowlers, they bowled really well.

“Still, 248 in the first innings was a good total. You can lose wickets upfront sometimes on these pitches but I’m proud of the my team for today and all through the tournament. We have a young team, many players are playing their first final and hopefully they will all learn from this,” he said.

Having led Saurashtra to their second title in domestic cricket, Jaydev Unadkat, who was instrumental in their maiden Ranji Trophy triumph in 2020, termed this an “unbelievable feeling”.

“Yet to sink in that we are the champions,” Unadkat said as Saurashtra won their second Vijay Hazare Trophy. They first won it in 2008 after defeating Bengal.

“When you get one (domestic) title, it feels good but to do it second time shows that you are a champion side.” The left-arm pacer had an amazing spell in the Powerplay as Maharashtra had a slow start before Chirag Jani’s hat-trick in the slog overs restricted them under 250.

“I’ve been looking to set the tone but it’s not about one guy at all. We need people to step up at different times and that’s what we have got. We have match-winners and credit goes to all of them,” Unadkat, who returned with a tidy 1/25, added.

“Chirag Jani has been excellent and if there is one player in the side who deserves to play at the highest level, it’s him.” He had special praise for Sheldon Jackson who shepherded their run chase with a splendid 136-ball 133 not out.

“Wasn’t in form but the way he batted today shows that he belongs to this level and also the highest level.
“There is a great camaraderie in our team and that’s really good for us. Credit to Rutu for the way he batted and the way his team played.

“Winning a domestic trophy is never easy, I know it after being here for a decade. So a lot of credit to the entire team and support staff,” Unadkat said.

Struggling for form, Jackson had just 40 runs from his last four innings as he reserved his best for the big stage.
“Credit goes to the entire team and management for backing me, because I was failing all tournament and didn’t actually deserve to get a chance today.

“So credit to those who backed me. Yes, experience counts, but what’s the point if you aren’t scoring runs. Plan was not to lose wickets upfront,” he said.

‘None of their business’: US rejects China’s opposition to ‘Yudh Abhyas’ joint military exercise with India