Japan stun Spain 2-1, knock Germany out of the World Cup

Asian giants script a second half comeback to stun the European giants; Germany out in group stage of World Cup for second time in a row; Japan will face Croatia in Round of 16 while Spain will face Morocco. 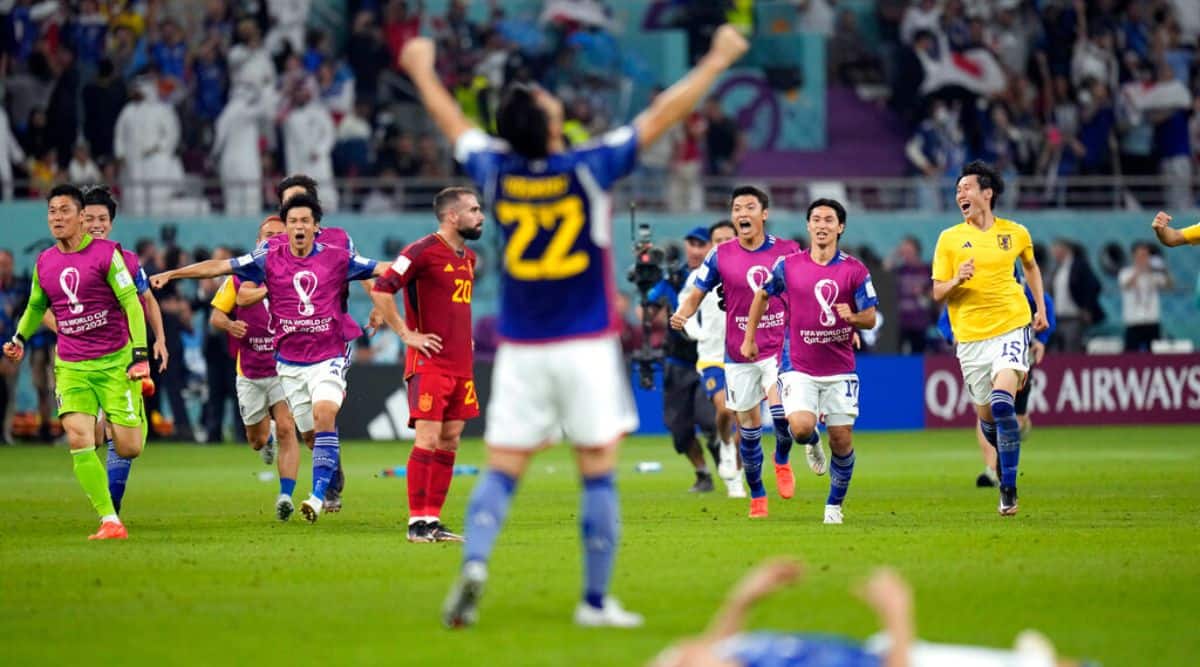 Japan had stunned Germany once in this World Cup. They did it again on Friday – this time, also upsetting Spain in the process. And they did it at the same venue as well – the Khalifa International Stadium.

In one of the most dramatic evenings in World Cup history, the Asian giants staged an incredible second-half comeback, beat the 2010 world champions Spain 2-1 and, in the process, knockout the 2014 world champions Germany, who exit the World Cup in the group stage for second time in a row.

Also Read |‘Normal thing to do’: Japanese fans tidy up at World Cup

As fortunes of all four teams in Group E swung from one extreme to another, Japan topped the pool with six points ahead of Spain, who were level on points with Germany (4) but sneaked into the last 16 ahead of their European rivals owing to a superior goal difference. Costa Rica, who were in contention to progress for a few minutes when they led Germany but lost 4-2, finished at the bottom of the group with three points.

But the night belonged to Japan, who once again scripted a massive upset thanks to inspired second half substitutions.

Japan coach Hajime Moriyasu’s team selections have come under heavy scrutiny in the last two matches. After his substitutions worked wonders in the second half against Germany, the players who turned around the game were left on bench against Costa Rica, which resulted in a loss. And when he kept them out of the starting 11 against Spain on Thursday, one wondered if Moriyasu had blundered again, especially after Spain dominated the first half, went 1-0 up following a Alvaro Morata header in the 11th minute, leaving Japan on the brink of elimination.

Perhaps he did. But he course-corrected and Japan came back from the dead to win the match and make it to the Round of 16.

Moriyasu brought on Ritsu Doan – one of the impact players from the Germany win – off the bench at the start of the second half. And it turned out to be a game-changing move as Doan scored within a minute of coming on to turn not just the match, but the entire Group E equation, on its head.

Group E we will never forget you. ❤️#FIFAWorldCup | #Qatar2022

Until that moment, it had been plain sailing for Spain and Germany. While Spain were never troubled by Japan, Germany were asserting themselves over Costa Rica at the Al Bayt stadium.

A Serge Gnabry header off a David Raum cross in the 10th minute had given Germany the lead and they looked on course to secure their place in the last 16, given that Japan – who were ahead of them on points before kick off – were losing to Spain at that moment.

It stayed like that until half time in both matches. After restart, though, the tables turned.

Japan came out all guns blazing and after Doan’s equaliser in the 48th minute, Tanaka knocked the ball past Spain goalkeeper Unai Simon under controversial circumstances. It seemed like the ball had crossed the byline before it was played across for Ao Tanaka to score. But after an agonising VAR wait, it was ruled in Japan’s favour.

Spain pressed hard for the equaliser but despite keeping the possession, they were unable to breach the Japanese wall.

Japan survived anxious moments late in the match to record a famous win. It didn’t matter that Germany had defeated Costa Rica in the other game. A week after they’d upset Germany, they dealt a bigger blow this time by knocking them out of the World Cup.