How Australia’s Aziz Behich provoked Messi, but almost rebounded with the goal of the World Cup

Son of a Turkish-Cypriot migrant to Australia, Behich nearly pulled off the best goal of the tournament but it was not to be. 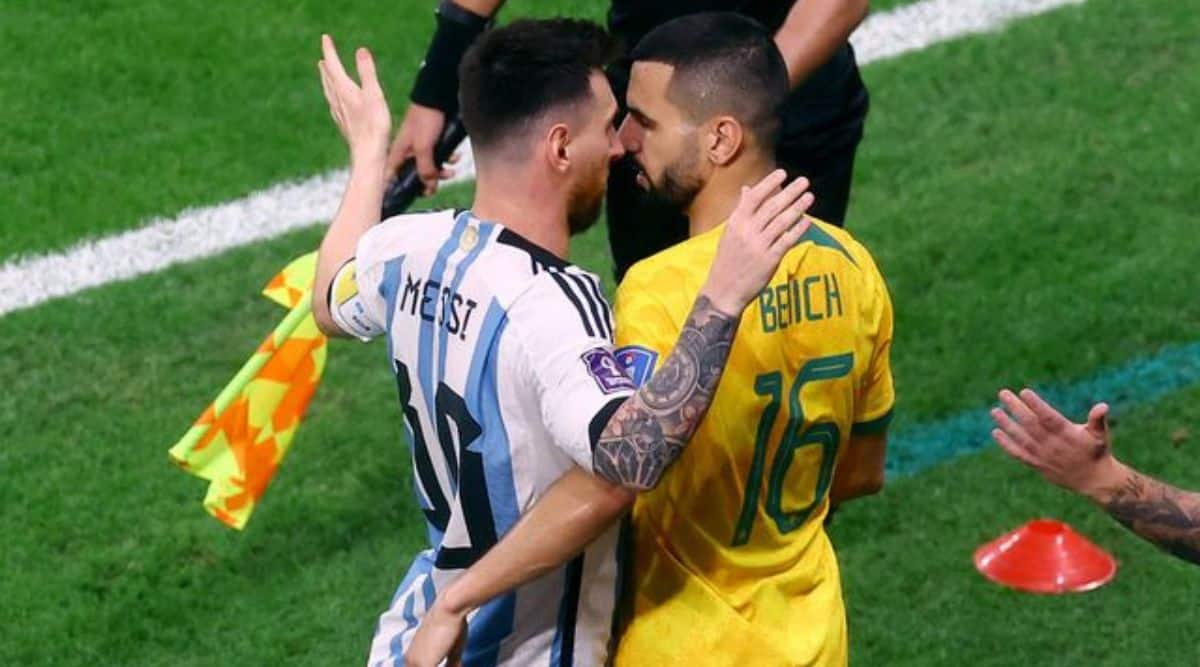 Ten minutes before half-time, something snapped in Aziz Behich. A shove, a shirt-tug, a snarl – and he was staring right into Leo Messi’s eyes, eyelids almost touching each other’s. Even as the referee would pull them apart, Behich’s eyes flared. Red mist swirling in the air. Interestingly, Messi’s eyes too would turn crimson. Last time the world saw him that angry was last July during Copa America when he taunted the Columbian striker Yerri Mina’s penalty miss: “baila ahora,” he would roar at him; ‘dance now’ a seeming reference to Mina’s signature goal celebrations. Here, against Australia, Messi’s lips didn’t open up; his eyes did.

“Leo, when these things happen, he brings out that inner fire that he has, that personality that makes him even bigger than he is,” team-mate Mac Allister would later say. “In these kind of games, he becomes bigger.” Only Messi would know if there was a connection or not, but very soon, he did turn bigger. The sequence is worth numerous look at replays: especially that manic run of anticipation after he tapped the ball in from far right corner as if he had envisioned the few steps ahead already. Tap-collect-fire-goal. But this isn’t the story about Messi; it’s about the other man Behich.

Near the end of the game, he would rouse himself into almost scoring the goal of the tournament. He had criss-crossed from the far left from nearly the half-way line, shoving past the first Argentine on his way, then bursting through at breakneck speed to split two converging defenders to emerge on the other side with the ball still on his foot. Now, he was inside the box, still rushing, turning to right to leave another Argentine floundering, and was about to take the kick of his life, when Martinez’s right foot materialised to present a cruel intervention.

He lay sprawled on the ground, his bright crimson-red shoes reflecting light, but all light seems to have drained out of Behich’s face, sunk in the grass, with the realisation kicking in that the greatest moment of his career, a mini-redemption song after the Messi-shove, certainly the best goal of the world cup, would fade away into a what-if moment at the best.

That could perhaps have been his chewing-gum image moment like his father.

His father Yasar, a Turkish-Cypriot, had fled a coup in North Cyprus to take refuge in Australia in 1970’s. A famous footballer in his native land, that his image was printed on the inside of a chewing-gum wrapper. Like the Big Fun, bubble-gum in the 80’s India where Kapil Dev and Viv Richards would be flashing their teeth.

The father had left his footballing dreams behind and sweated on factory floors and cleaning jobs to get a decent life for his five kids; Aziz was the fourth and the only son. The son would lean over fence to watch his father kick the ball on the community fields.

“It was probably difficult for them, but we never saw that part of it. They hid it from us. They did whatever they could to make sure we had the best life possible,” Behrich once told Abc.net.au.

Advertisement
Read |Messi, the universal language that unites the world

His dad drip-fed the love of football in him. The pair would follow Turkish Super Lig, and as things would turn out, years later, he would get an offer from Bursapor in Turkey to play. “A no brainer” but the first six months proved hell. He didn’t get a game as coaches kept changing but he willed himself to hang on to emerge out of anonymity.

People have asked him why he chose to represent Australia instead of Turkey.

“I always felt Australian, but I do have the Turkish blood in me, so I was always the player caught in-between,” he told ABC. “I always wanted to play for Australia; I grew up there, I started my football there. They gave my family a life.Even my dad said, ‘the best decision you made was playing for Australia.’ Australia gave us a chance. I’ve always felt like I had to give something back.”

Faith was another thing that resolved inside him as he grew older. “”I’m a very proud Muslim,” he said. “I’m not sure why, but as I’ve gotten older, I find I’m moving more towards it. Living in Turkey and learning off my mum and my dad, asking them all sorts of questions, has made me open myself to it more. When I represent Australia, I’m also representing the Muslim community in Australia. At the end of the day, everyone’s beliefs are their own; I just try to show that it’s possible to conquer your dreams.”

And sometimes dare to dream beyond what seems rational. A boy from Turkey, the son of a secret superstar father whose image was in chewing gum wrappers but who had to leave all that behind for survival and family, the man who would get trapped in red-mist with a GOAT in a big world cup game, and rebound with a most audaciously-dreamy effort of his own, only to be tripped at the last second. Life.