World Cup 2022 Highlights, Saudi Arabia vs Mexico: Mexico had reached the round of 16 at the last seven World Cups, which was tied with Brazil for the longest current streak. 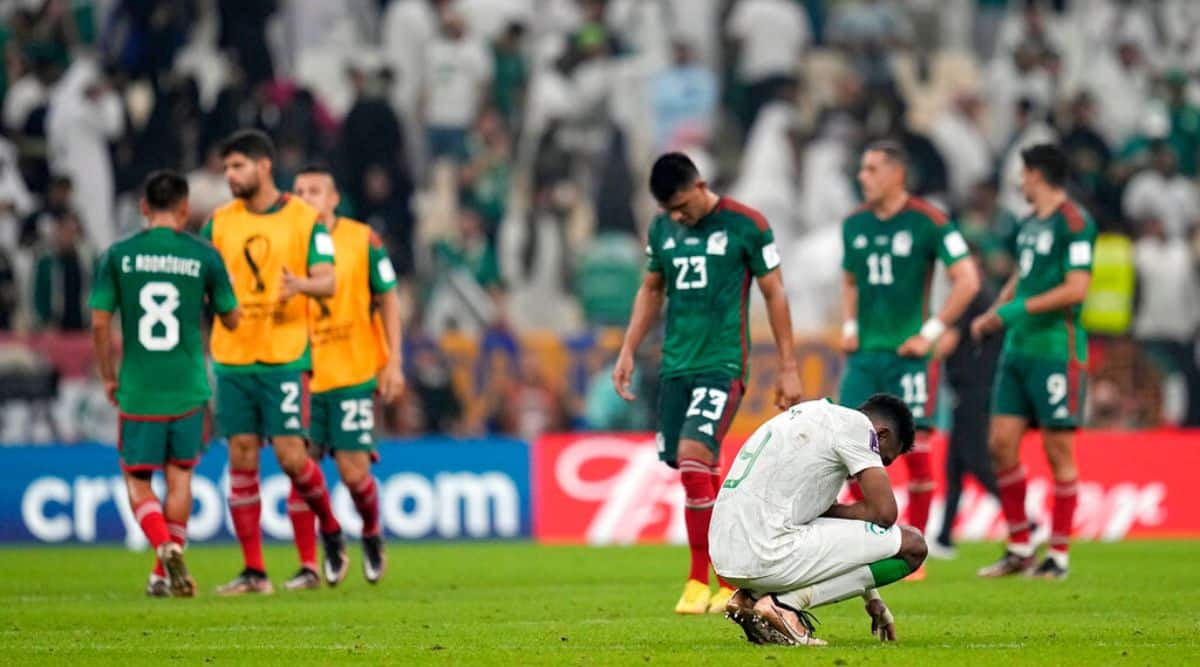 Saudi Arabia vs Mexico, FIFA World Cup 2022 Highlights: Henry Martin and Luis Chaves each scored in Mexico’s furious attempt to stay alive at the World Cup, but the 2-1 victory Wednesday night over Saudi Arabia was not enough.

Because of Argentina’s 2-0 victory over Poland in a simultaneous match, Mexico failed to advance out of its group for the first time since 1978.

Mexico had reached the round of 16 at the last seven World Cups, which was tied with Brazil for the longest current streak.

The referee blows the final whistle as Mexico bow out of the World Cup. They needed a third goal to go through but Saudi Arabia scored at the last instance to knock the wind out of sails that were flying for 90 minutes in full defiance. An incredible attempt by Mexico after two poor showings at this World Cup. The match ends Mexico 2-1 Saudi Arabia.

All over!!!! It's full time and Poland and Argentina have gone through to the next round. That Saudi goal killed all the momentum for Mexico and put qualification beyond them.

Heartbreak for Mexico! Saudi Arabia score as the North American team stays up the pitch searching for a goal. Al Dawsari taps in a simple finish. Mexico can still turn this around with a goal but only have a minute or so left.

Jimenez is foul. They can load it up again. Taken short. Alvarez into the penalty box and fires a cross wide!!! No one reaches it and Lozano fires wide.

In the other match, ARG have beaten POL

And we have 7 minutes added to the match. And it's all Mexico and another free kick. Another Saudi player in the book. Chavez lines one up. And it's straight to the keeper who beats it out.

And that's a goal and is it??? Good finish but that's given offside. Absolutely nailbiting stuff in the Group scenario now.

Alvarez puts in a cross but it's hooved clear by Saudi arabia. Poland have a player booked in the other match. That's now 2 less than Mexico.

Lozano is brough down just on the edge of the penalty box. Huge opportunity for Mexico here. They score, they are through. And chavez has hit the wall!!

That's another shot fizzed wide by Pineda!! Could have been deathly fror Poland. But they breathe easy. Raul Jimenez has come on for Mexico.

Another block by the Saudi keeper keeps the score at 2-0!!!

Poland and Mexico are level on points. They are level on goal difference. They were even level when they played each other to a 1-1 draw. What does this mean?

It triggers Fifa fair-play scenario where a team with fewer yellow cards in the group stage goes through to the next round in case of a tie. Poland has accumalated four yellow cards this tournament while Mexico has seven to their total team.  As of now, Poland are going to the Round of 16 along with Argentina. One goal either way changes things once again.

Chavez has lined up a free kick. It's dead centre. He has done it before and that's another free kick saved by the Saudi keeper. He is having a nightmarish day.

Ohhhhhhhhh!!! Martin catches a volley and blasts it over the Saudi Arabia goal. If they had scored, they would have been through!!!

66': Saudi try and fail to break down MEX

And Argentina have scored again!!! That means Mexico and Poland are level on GD at the moment. But Poland are over them at the table due to FIFA Fairplay rules. Menwhile, Saudi Arabia are trying hard to break Mexico down.

As things stand, if Mexico score again and scorelines for both games remain that way, Argentina and Mexico go through. If Argentina score another goal against Poland and both games end on 2-0, then Fifa's infamous Fair-play rules comes into play and the team with fewer yellow cards go through. In that case, it will be the Polish that sneak into the Round-of-16.

Mexico keep on going with a barrage of corners coming  at KSA. One of them is curled in and the saudi keeper punches it away. Mexico build again.

Lozano breaks through and that's another one slotted in by Mexico!!! But wai!! The flag is up and Mexico wil have the goal ruled out. Heartbreak.

Incredible scenes at the Saudi Arabia-Mexico game. Luis Chavez has just scored the second free kick goal of this World Cup. It is most definitely the best though. A left footed curler that ripped into Saudi keeper Al Owais's goal and the hearts of Saudi fans. This group is open and how!

Glorious free kiclk from Chavez!!! That has gone into the right side of the goal!!! That has doubled Mexico's lead. Mexico are now within one goal to Poland!!!

They tried for 45 minutes and failed. But minutes into the second half, Mexico got the goal they've been hunting for all night. Forward Henry Martin latches onto a deflection from a corner to tap the ball into goal. A real poacher's finish and now suddenly goal difference is in effect to decide Group C.

And yes!!!! Mexico have broken the deadlock!!!! A corner is curled in and Martin is there to bundle the ball in!!! What a start to the second half for MEX

Defending champion France has already advanced to the knockout stages in Group D with a full six points from its opening two games. Australia sits next with three points, while Denmark and Tunisia trail with one point each. Australia will qualify with a win, or a draw unless Tunisia beats France. Denmark needs to win and hope that Tunisia doesn’t beat France. Australia is counting on France performing well against Tunisia.

At every World Cup since 1994, Mexico have reached the last 16. Saudi Arabia, on the other hand, haven’t gone beyond the group stage since 1994.

On Wednesday, something’s got to give. The ripples of Saudi Arabia’s shock win over Argentina can still be felt in the way Group C is shaping up heading into its final matchday. All four teams still have a shot at qualifying for the Round of 16. [Read More]