FIFA World Cup: Ronaldo a misfit in modern football, who defies all logic to be central to Portugal’s fortunes

CR7's self-centred and attention-seeking attitude may be uncomfortable for some, but the Portugal icon is central to the fortunes of whichever team he plays for. 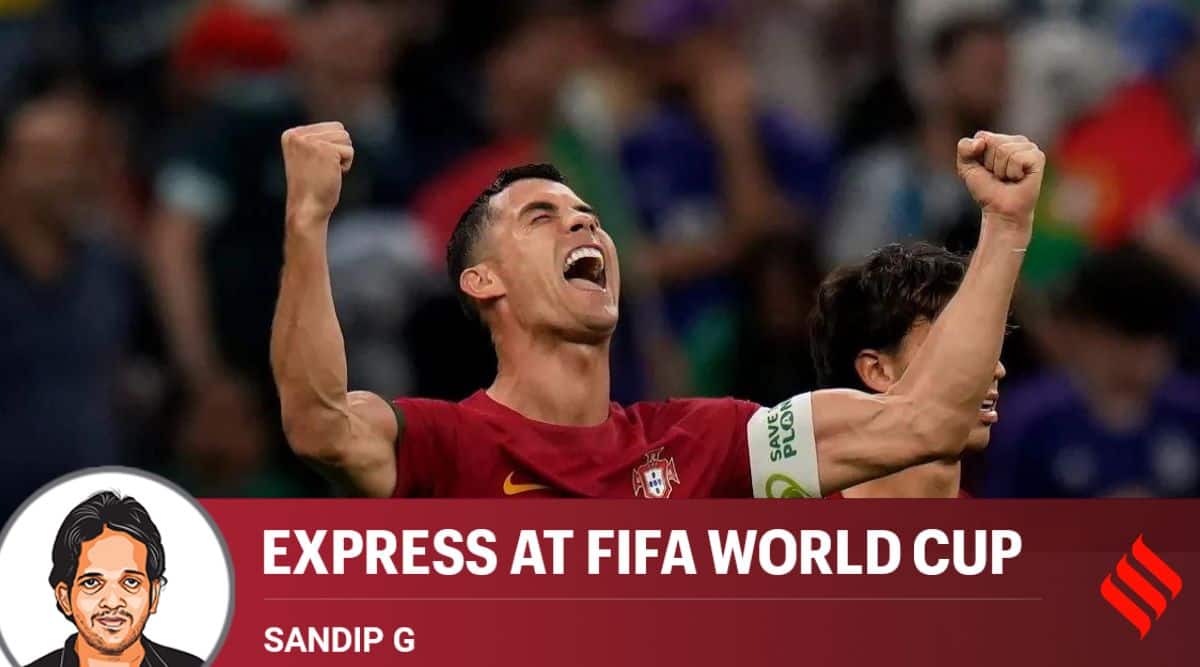 The Cristiano Ronaldo celebration is a thing of pure sporting athleticism. He tears away to the corner flag, in the direction of the cameras snapping away to capture the moment.

He clenches his fist, leaps in the air, higher the stakes the higher the leap, and spreads his legs apart like a protractor, crosses his arms, tracing an X in the air. In this moment of sheer athletic delight, he looks like the human version of a floating Eiffel Tower, gleaming in the light, from the floodlights, from the cameras, and perhaps his own halo. He lands, spins around and stretches his arms for his teammates to embrace him, the world to embrace him.

And then he shrieks: SIUUU!! The crowd echoes it back. In mood for theatre, he tugs at his ears, suggesting, rather ordering the crowd, to cheer louder.

The genesis of the celebration was accidental, for all the theatre. “I started to say ‘Si’ — it’s like ‘Yes’ — when I was in Real Madrid. When we would win, everyone would say ‘Siiiii’ and so I started to say it. I don’t know why, it was natural,” Ronaldo once told soccer.com. It’s as if every time he scores a goal, he wants the world to converge on him.

The self-obsession, for the onlooker, seems uncomfortable. Like when he celebrated the goal that was not his against Uruguay. Had that goal been added to his tally, and not Bruno Fernandes’, it could have been called the ‘spiked hair of God goal’.

After his celebrations and SIU, he looked at the replay on the screen, his ears waiting for the announcer to clack his name as the goal-scorer. It was not Cristiano Ronaldo. It was Bruno Fernandes. Ronaldo smiled. But one could hear the wilt of heart.

A goal taken from his tally should be no cause to sulk. He has twice as many goals as his teammates. It was not the first time. When his Manchester United colleagues were celebrating the Champions League title in 2008, beating Chelsea in a penalty shootout, Ronaldo was sitting in a corner of the ground, away from all the revelry, and reflecting on the shot he had fluffed.

It’s not that Ronaldo was not feeling joyous winning his first Champions League crown, but he is such a perfectionist and individualistic, that he was thinking of himself first. It’s that streak that made him successful, and it could be the trait that could unmake him as well.

It’s not that he does not care for the team, or the coach, or the tactics. In his career, he has played according to the needs of his team. In his early Manchester United days, he was the jet-heeled winger who whipped up serious pace, and of course, a step-over magnet.

He then evolved into a second striker, a Centre forward, and in his Madrid peak, he was the classical striker. But at 37, at a time when there is an obsessive emphasis on pressing and running, the machine that is Ronaldo seems beyond another upgrade. The processor simply cannot handle the new software and applications.

The crux of his recent travails has been this tussle between the individual and the team. Ronaldo wants the team to be built around him. He has a case. He shares an all-time great pedestal with his great peer Lionel Messi.

He has in his glittering gallery of trophies five Ballon d’Or honours, as many Champions League medals, a Euro Cup, league titles in three countries, and countless goals (701 for the clubs and 118 for his country). So why not build the team around the greatest? When it isn’t, Ronaldo feels insulted, even derided. He craves for the unflinching light of his mid-noon peak, even now.

He is still a ruthless goal-scorer. He scored one goal in two games in his 54-match second stint with Manchester United. He has netted one goal in three games for Portugal this year, belted 13 in 14 appearances last year. So, by his logic, why should the team not revolve around him if he is doing what he’s deputed to do? That is to score goals, and in the end it’s goals that win games and tournaments.

But there obviously is more to a game than goals, perhaps, more than ever before. A player is no longer expected to perform the duties of the number denoted on his shirt. A goalkeeper initiates attacking moves, full-backs become play-makers, defensive midfielders create, forwards need to press, track back and cover a lot more distance than they were supposed to, say less than five years ago.

So when someone lags, someone else needs to fill in, and in the process, the entire team tires out. And in a tournament as gruelling as the World Cup, it takes a quick toll on the team. The coach then has to pick a team wherein there are extra legs to make up for the sluggishness upfront, where there is an extra defensive cushion. It was not a surprise Portugal have looked the most fluent and dynamic in this World Cup after Ronaldo has been substituted.

To an extent, coach Fernando Santos has succeeded in managing a balance between Ronaldo and his own tactics. That is when Ronaldo is on the field, the pressing is not as intense as when he is not around. Then, Ronaldo was Santos’ most-used player in qualification (810 minutes) and Portugal’s top scorer in qualifications (5).

Fernandes sarcastically urged the media to keep hounding Ronaldo. “I think he likes to work under that criticism so I pray all of you keep doing that because he gets the best of himself when you do that,” he would say.

Fernandes was referring to another trait of Ronaldo that made him the ‘Bicho’ or the beast, as Sergio Ramos calls him. His siege mentality, his drive to prove his critics wrong that has turbocharged his career, his quest to be the centre of the footballing universe.