Each player revels in his individuality as the Samba machine purrs on, instilling fear in future opponents. 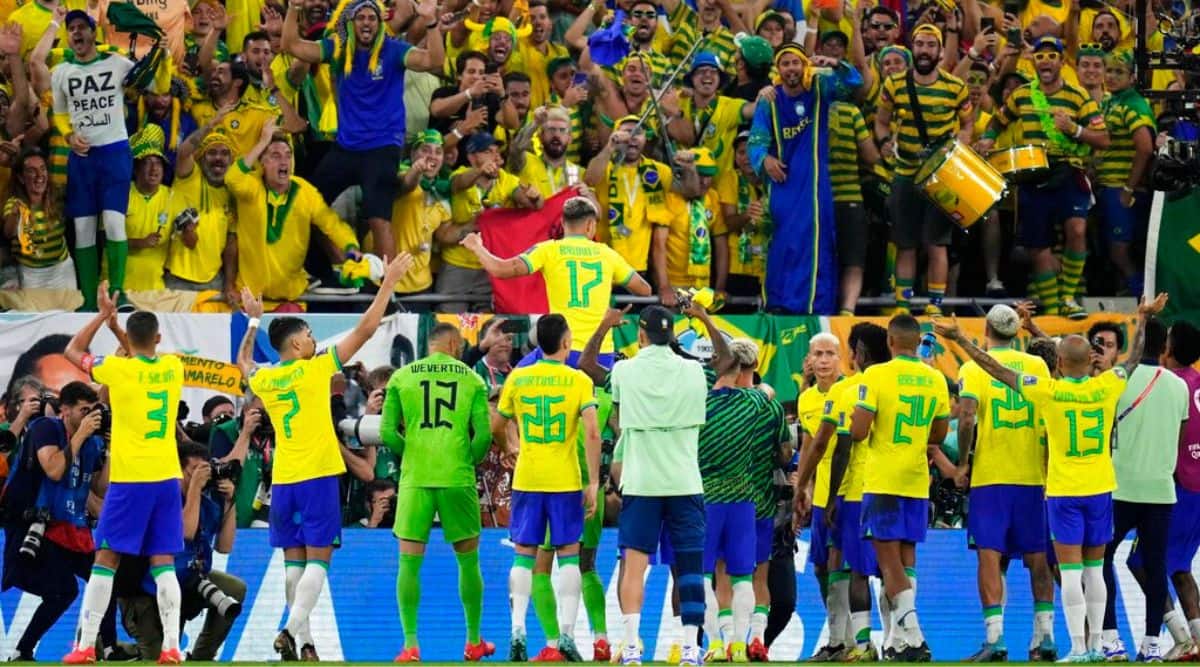 Of all the adjectives he could’ve chosen to describe Brazil at this World Cup, Zlatko Dalic picked ‘scary’. “Brazil is the best team at the tournament,” the Croatia coach said. “They have a great choice of players, a great squad, it’s scary…”

As an attacking unit, they have been rhythmic, delicate and quick-witted. Each player revels in his individuality – be it Casemiro providing the attackers with a cover; Vinicius Junior’s breathless pace, which combines with Neymar’s calming influence; Lucas Paqueta’s ability to play accurate through balls, making Richarlison’s direct runs even more threatening, and Raphinha’s versatility.

The Brazilian word to describe a holding midfielder – volante – perfectly sums up Casemiro. Translated literally, it means a steering wheel. And that’s what Casemiro is.

The attention is so much on the spontaneity, flair and creative genius of the Brazilian attackers that their world-class defensive midfielders often get overshadowed. In the 4-3-3 system, Casemiro plays as the single pivot where he acts as a defensive shield and at the same time, ventures forward to help the attackers.

Brazil’s Casemiro celebrates his team victory at the end of the World Cup group G soccer match between Brazil and Switzerland, at the Stadium 974 in Doha, Qatar, Monday, Nov. 28, 2022. (AP Photo/Andre Penner)

But the role in which he shines is while playing as cover for his teammates when they stray out of position – something that routinely happens with the adventurous, impulsive Brazilian players – and stopping attacks with fierce tackles. Not the cynical and mean-spirited fouls like, say the Argentines, but clean tackles that won’t put his team in danger. Unsurprisingly, when he played in Spain, they nicknamed him ‘The Tank’.

The 7-1 loss to Germany in 2014 is all the evidence that’s needed to prove that Brazil without Neymar is, frankly, nothing. Brazil’s second and third group stage games – where an injured Neymar did not play – further back this theory as Tite’s side lacked zing in the attacking third.

Brazil’s Neymar celebrates scoring his side’s second goal during the World Cup round of 16 soccer match between Brazil and South Korea, at the Stadium 974 in Al Rayyan, Qatar, Monday, Dec. 5, 2022. (AP Photo/Pavel Golovkin)

Although he is seen mostly on the left, Neymar has the licence to roam freely on the pitch so that he can get into spaces where he can work his magic. In the two matches he’s played in Qatar, Neymar has dropped deep to assist build-up, moved to wider areas to launch attacks, and scored goals himself. No wonder defenders feel the only way one of the most-tackled players in the tournament can be stopped is through manhandling.

He scored his first goal of the World Cup on Monday but goal-scoring is not what defines him. Paqueta’s biggest strength is his vision; the ability to create something out of nothing.

The string-pulling midfielder can do a lot of things. He acts as a link between the midfielders and strikers and is a huge threat during attacking transitions. He is good at holding possession, keeping the ball moving and bypassing a press. But Paqueta is at his finest when he has options in front of him to play perfectly-weighted, defence-splitting through balls.

Brazil’s Lucas Paqueta celebrates after scoring his side’s fourth goal during the World Cup round of 16 soccer match between Brazil and South Korea, at the Stadium 974 in Al Rayyan, Qatar, Monday, Dec. 5, 2022. (AP Photo/Manu Fernandez)

At the World Cup, though, he has been threading passes through the tiniest of gaps between defenders, and feeding the likes of Richarlison, Raphinha and Neymar.

Speed has been Vinicius’s biggest ally from the time he started kicking the ball for fun on the dusty fields of Rio de Janeiro. His pace was what stood out for the scouts who spotted him, helped him zoom through Rio’s youth system, and continue his mercurial rise in world football.

Now, he torments opponents with blinding runs down the left. Add to that dribbling ability and unpredictability – like the delicious chip in the direction of Paqueta for Brazil’s third goal against South Korea, when most believed he’d take a shot or play a conventional cross – and the 22-year-old perhaps becomes the only player capable of challenging Kylian Mbappe’s supremacy in the coming years.

Brazil’s Vinicius Junior celebrates after scoring his side’s opening goal during the World Cup round of 16 soccer match between Brazil and South Korea at the Stadium 974 in Doha, Qatar, Monday, Dec. 5, 2022. (AP Photo/Jin-Man Lee)

Vinicius, who has almost always delivered in crunch situations for club and country, is a prototype Brazilian who can bamboozle opponents with nutmegs, dribbles, flicks and direct runs towards goal. But it’s his speed that makes him an unstoppable force.

The quick give-and-go passing around the edge of the box to unlock South Korea’s compact defence, leading to Brazil’s second goal, is exactly the kind of football Richarlison loves playing.

But oddly enough, although he’s turned on the style in Qatar, Richarlison isn’t the most creative player in this squad. Nor is he a master dribbler. Richarlison, instead, can run with the ball and provide directness to the Brazilian attack with his pace, thus posing a very different kind of threat. His style of play makes him an asset during attacking transitions.

Advertisement
Brazil’s Richarlison celebrates after scoring his side’s third goal during the World Cup round of 16 soccer match between Brazil and South Korea, at the Stadium 974 in Al Rayyan, Qatar, Monday, Dec. 5, 2022.

At 5 feet 10 inches, Richarlison isn’t among the tallest players on the field, which leads to opponents underestimating his threat in the air. But he can jump really high and has excellent timing to meet crosses, qualities visible when he scored the sublime bicycle kick against Serbia, a contender for goal of the tournament.

Perhaps it’s down to his Italian ancestry but Raphinha combines the best of both worlds – the flair that is synonymous with Brazilian football and the physicality that’s commonly associated with European sides.

It’s tough to bracket Raphinha into one category. He has the ability to create chances against defences that are tough to break down. He’s among the best in dead-ball situations. He’s athletic. And has ridiculous close control.

Even his coaches find it tough to put a finger on one attribute that makes him special. “He can play wide, he is fast, he can cross, he can finish from middle range,” Tite said last year.

Marcelo Bielsa, under whom Raphinha blossomed at Leeds United, observed: “What Raphinha is able to create, we’ve already seen… The set-pieces, he manages them very well. Physically, he’s very apt. He can unbalance individually or combine with his teammates. I can’t think of many more things to add to an attacking player.”