He has been accused at home of departing from the Dutch ideals, but in reality, Van Gaal has just experimented with another dimension of the game. 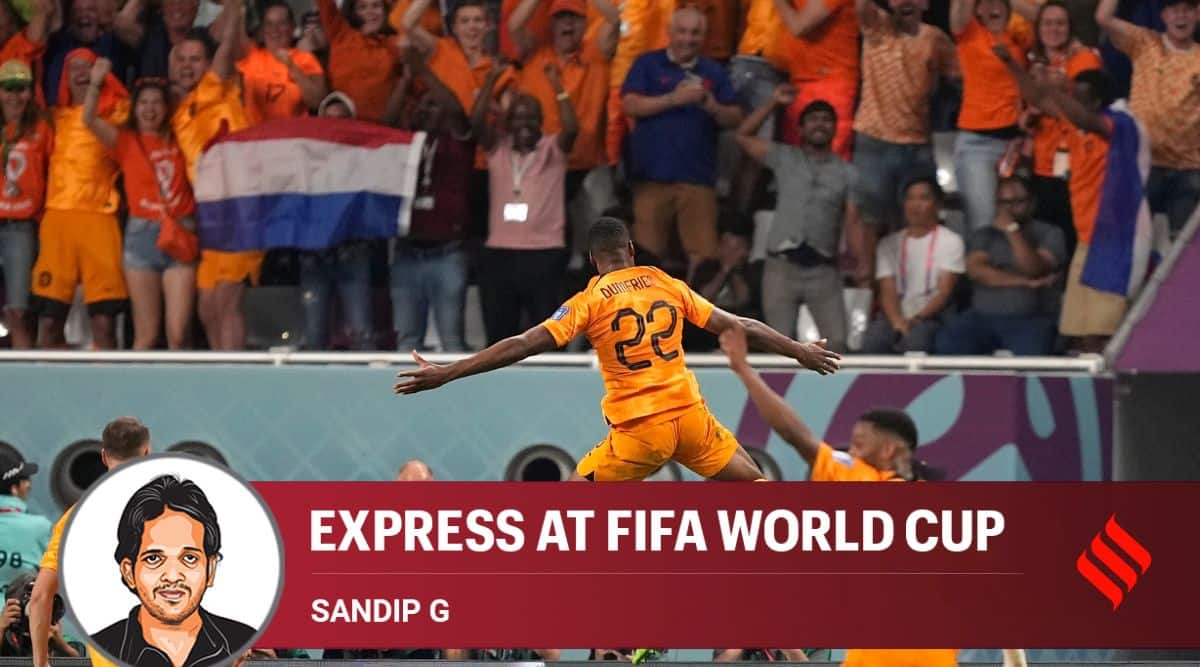 Denzel Dumfries of the Netherlands, center, celebrates after scoring his side's third goal during the World Cup round of 16 soccer match between the Netherlands and the United States, at the Khalifa International Stadium in Doha, Qatar, Saturday, Dec. 3, 2022. (AP Photo)

After the game, Louis van Gaal and Gregg Berhalter exchanged a tight hug, a warm handshake and some words. The day before though Van Gaal was asked whether he remembers the American manager from a match in 1994 when Berhalter’s Sparta Rotterdam upset Ajax: “Do you really think I remember? No, I don’t remember that match,” he said bluntly. Berhalter, when duly put across, was hurt: “I don’t think that’s true. Being that competitive, he has to remember that,” he said, and quipped: “Maybe, after this game he will.”

It was not intended as a verbal joust, but more like lighthearted banter. But his team, borrowing heavily from the Dutch ideals, from the formation to passing, did little to leave an impression on Van Gaal. Rather, the ruthless Dutch, flicking gears as the tournament heads to the business end, exposed the vulnerabilities of the US, vindicating the belief that the US are far from a semi-serious footballing nation. In four years, they would be co-hosts of the World Cup, but unless they reboot, their plight would be similar to Qatar. It was also a vindication that, despite billions and resources, only a deep-rooted football culture could take the team deep into a World Cup. The US, for all their athleticism and determination, were technically inept and tactically hollow, outwitted by a master tactician.

🇺🇸 USA had its opportunities but it’s 🇳🇱 Netherlands who advance to the #Qatar2022 Quarter-finals!

His fundamental plan was simple — congest the midfield first, draw the US wingers and midfield into the centre and then like a flower blossoming at the first ray of sun, expand, with sharp, simple passing and exploit the space left behind by the American wingbacks. Not that Daley Blind and Denzel Dumfries were quicker than their American numbers Antonee Robinson and Sergiño Dest, but cleverer and positionally more disciplined. Dumfries was creativity unleashed, setting up two goals and pinching one himself.

But beyond the effervescence of Dumfries, the incompetency of Americans, it was the tactics of Van Gaal that shone the brightest. Once the assigned heir of Johan Cruyff, he has long veered away from the footballing principles that the Dutch keep close to their heart. None more insulting to them that his departure from 4-3-3 to his unflinching commitment to the 3-5-2 and its variations (he deployed 3-4-1-2 against the US).

The formation besotted him just before the 2014 World Cup when he lost his playmaker Kevin Strootman, on whose gifts the team was built, to an injury and hence embraced the system, first as a makeshift arrangement before he gradually fell in love with it, exploring its depth of possibilities and permutations. He had the perfect players for it too, with two hard-tackling midfielders and a riveting pace on the wings. Ever an espouser of the 4-3-3, the classical. Cruyffian system, in the fag end of his coaching career, he turned to a tactic reviled in Holland. An emblem of anti-Dutch football, a pragmatic method that compromises on the Dutch ideals of possession, control and fluidity.

His critics crooned that Dutch football was going backwards, adopting anti-football. To them, the sagely Van Gaal would calmly retort: “You can attack with it and you can defend with it. You can put the opponent under pressure everywhere and, if you play it well, there is less risk of the opponent breaking through on the counterattack because you have three central defenders.”

He even regretted having mocked the 3-5-2 in his Barcelona days: “Back then I didn’t have the ability to see the advantages of that other system. In the 5-3-2 system, the balance in the team is better and it could possibly be done with a 3-4-3 too.” Perhaps, it was his inability to guide a stellar Dutch to the 2002 World Cup that might have cast suspicions on the 4-3-3.

Under him, the Dutch have not played the brand of football that the Dutch want their team to play; even some of the players, like his captain Virgil van Dijk, have publicly criticised his coach. But like with any formation that can be tweaked to defend or attack, Van Gaal’s side could be thrilling to watch when they attack, the wingbacks blazing down the flanks, the forwards making the darting runs upfield, the defensive midfielders filling into the space left by the fullbacks, the ball pinged from one player to the other with lucid one-touch passes.

The first goal was classic Van Gaal — irrespective of the systems he is steadfast on quick, simple passing, his players not pondering too long with the ball. Back in Barcelona days, he once sat Romario out for two games because he lingered too long on the ball. Of that 20-pass sequence, 16 were in the Dutch half. With every pass, the USA, a pressing side that swears by the 4-3-3, pushed more men into the Dutch territory. This was exactly what the Dutch wanted. Depay supplied the ball to Cody Gapko, a few metres in the US zone, and Gapko slid an angled ball to the overlapping Denzel Dumfries, who lined up Depay, who by then was just inside the box through the legs of an American defender. The finish was lethal, the passing was sumptuous, but the most glittering aspect of the goal was the movements of the players, sniper-sharp, neither over-running nor under-running. The passing would make you chant Cruyff, but it was appropriate to whistle Van Gaal, who, like Cruyff and Rinus Michael, Pep Guardiola and Carlo Ancelotti, is one of the greatest thinkers of the modern game. Flip through most goals scored under Van Gaal, there are similar notes as you had seen in this game. He has departed from the Dutch ideals, some say he has diluted them, but in reality, he has just experimented with another dimension of the game.

The stability it infuses in defence can’t be underrated either. When the US hammered forward, the three-man defence would turn to five, sometimes six or seven. It helps that among their fullbacks, Blind is adept at defensive duties, so are Frenkie de Jong, and Marten de Roon. So they morphed into an impenetrable orange wall. In the switch from attack to defence, few systems are endowed with such easy transitions, albeit with the right players.

He has refined the formation too. Back in 2014, he used to rely almost entirely on counterattacking, and for all practical purposes, they were 5-3-2. But the prospering of quality centre-backs like Van Dijk, Nathan Ake, Julien Timber and Matthijs de Ligt bestows him more luxury to wear a more attacking outlook. It’s no coincidence that the Dutch have been most successful this century under Van Gaal and playing under his 3-5-2. He took them to third place in Brazil and now into the quarterfinals. In the interval between his two reigns, the Dutch failed to qualify for successive Euros and the 2018 World Cup. Perhaps, like Van Gaal a decade ago, the Dutch too should rethink their views on their most hated formation. As for Berhalter, it is unlikely that Van Gaal would remember him after the match either.