FIFA World Cup: Brazil turn back the clock, turn on the style in homage to Pele

Samba boys pay tribute to legend in appropriate fashion, as South Korea are humbled in a throwback to Selecao's golden age. 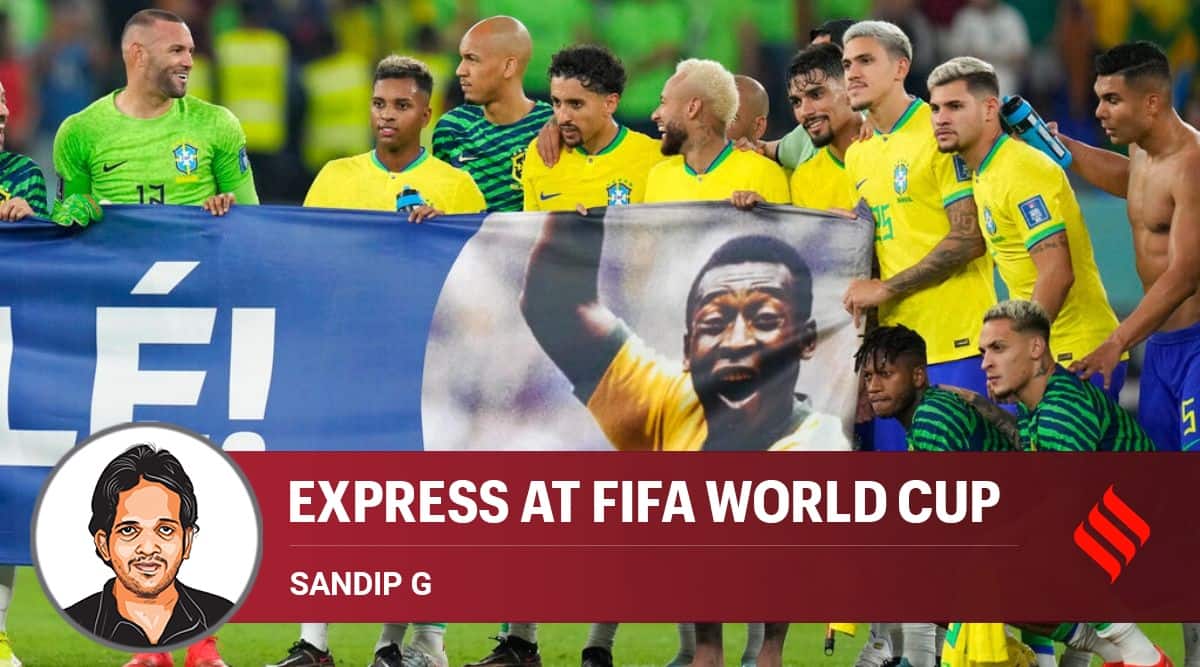 Brazil's players shows a banner in support of Brazilian soccer legend Pele at the end of the World Cup round of 16 soccer match between Brazil and South Korea, at the Stadium 974 in Doha, Qatar, Monday, Dec. 5, 2022. (AP Photo/Andre Penner)
Listen to this article
FIFA World Cup: Brazil turn back the clock, turn on the style in homage to Pele
x
00:00
1x 1.5x 1.8x

The match began and ended with homages to Pele. Before the start, thousands of fans sang ‘O Rei, O Rei’, as he is fondly called, and waved flags with his face painted on them. After the game, after the long dance of a game ended, the Brazil team produced a blue rexine banner with PELE! printed in bold beside his beaming face ripped off from the famous picture of him holding the 1970 World Cup trophy aloft. A lucid but emotional get-well-soon message.

The biggest tribute to football’s extraterrestrial, as Tite called him, though was rendered in the first 40 minutes of this most enthralling game, in which South Korea were rendered to being little more than props in a 4-1 defeat. That was when Brazil’s latest iteration whipped up nostalgia and romance, dance and joy, an outpouring of not just the ideals that make Brazilian football so endearing, but an exhibition of their culture and sensibilities, of what makes both their country and their football.

Watching all these unfold from his bed at the Albert Einstein Israelite Hospital was Pele. Little doubt that the game might have left him marvelled, for this was not a game that unfolded in the present, or designed in the future, but from the past, from a re-calibrated VHS tape of a distant era. A game he could relate to; a game he could call ‘ours’. His fading memory would have rolled back memories of a time when the Canarinhos flapped and fluttered their wings with unbridled joy and freedom, a version un-imprisoned in a girdled European cage, unimpeded by modern-day football’s fixation with shape and structure. A brand of football that was free and pure.

Touching tribute from Brazil players to their greatest ever. Pelé! 💛 pic.twitter.com/ol8Xj1M1Rf

This was the night, in the soon-to-be-dismantled Stadium 974, that Brazil rediscovered their identity, reacquainted with the myths and folklore they had listened to growing up, and embellished it with a rendition of their own. This was the night when it was not just about Neymar or Vinicius Junior, Richarlison or Raphinha; but about Pele and Garrincha, Socrates and Eder, Carlos Alberto and Nelinho. One could see them all, dribbling and pirouetting, slaloming and step-overing, unleashing the suitcase of tricks honed and homogenised in the favelas and praias.

This was futbol beleza, or beautiful football — this is what Brazilians love to call their football and not the Nike-marketed Joga Bonito, which in Brazilian Portuguese means aesthetic, not beautiful. This was a night of throwbacks, a night of football’s most intrepid skills, unchained by Europe’s fixation with frill-less football, breathtaking football, the sort of football that leaves one drained and enlightened at the same time. Perhaps, one would think this was just an illusion, hallucination, or magical realism.

Dancing with the football

Just behold Richarlison pin-balling the football to and fro off his crown, keeping his balance like a kuchipudi dancer. Oh, and then that finish! Opening up his rubbery frame and insouciantly side-footing the ball into the net. As if he learned to side-foot the ball before he began to crawl. Then breaking into a circular dance, joined by the supple-limbed Tite, who prowls the touchline with the quiet authority of Vito Corleone of Godfather, but jives like Danny Zuko in Grease. The steps for the dance is in their veins, in their football, and perhaps in their waking consciousness too. Tite would later say: “They’re very young and I always try to adapt a little bit to their language. They have a language, which is of dancing.”

In a sense, the language of Brazilian football.

It was not easy at his age, he says, breaking into peels of laughter: “You have to learn how to do the moves. And the moves are very tight.”

When Brazil hit their highest notes, football transforms into dance. “Like the free and sensual curve; the curve that I find in the mountains of my country,” as Brazilian poet Gilberto Freyre described the football of his country. Every movement is lyrical and lissome; every twitch of limbs, a twirl rather than a twist. Like that Neymar pirouette, fooling two defenders and the referee; or the glide-on-ice run for the spot kick; or the looping pass to Pacqueta for the fourth goal. If only Dani Alves’ bicycle kick found its desired destination!

But on this night, it simply did not matter; all that mattered was the outrageousness of it, the sheer sight of a 39-year-old bending his body to execute the most exotic of manoeuvres, the devil shot as they call it in Latin America. Those are tricks one imbibes not on a training ground or the coaching manual, but from the depths of imagination, or from fantasy. There were other trademarks too —rhythmic midfield triangles, the sudden explosions of pace, and a supreme sense of self-expression.

But Tite warned: “There are people who are evil who will say that (dance) was disrespectful.” Minutes later, Roy Keane would bleat: “I can’t believe what I’m watching, it’s like watching Strictly (Come Dancing).”

Last month, Anthony was vastly criticised for his 720 degree turn, Pacqueta was fined for a rainbow flick; Neymar was asked to cut down on his dribbles; Vinicius has been critiqued for breaking into Samba dance after scoring goals in La Liga. To his defence, then sprung Pele: “Football is joy. It is a dance. It is a real party.” So did his teammate Raphinha: “I want to see dancing, I want to see joy,” he posted on Instagram. Nothing, though, would matter.

Amidst all these, there was steel beneath the silk too. All great Brazil teams possessed that. The classic parallel could be with the 1970 team, which possessed a pair of robust centre-backs in Piazza and Britto; the left-back Everaldo would join then when Carlos Alberto put on the afterburners, as he did when he scored the most Brazilian of all goals, the fourth against Italy in the final. Pele’s fellow forward Tostao would drop off and join the midfield when Jairzinho pulsed forward. Clodoaldo was a diligent ball-winner and had a telepathic understanding with deep-lying playmaker Gerson.

In the same vein, Thiago Silva and Marquinhos instill stability as well as mobility. Both are blessed with an eye for goal too. Richarlison’s goal was conceptualised by Marquinhos and nurtured by Silva. First Marquinhos gathered the ball and supplied a sideways pass to Silva, who in turn lined up Richarlison with a one-touch pass. As the match wore on, both forayed upfront, while fullbacks Danilo and Militao would flank one of Casemiro or Pacqueta, would forge a three-man defence to snuff out counters. Both can interchange their roles, Casemiro could wear the playmaker’s boots while Pacqueta could switch into a defensive midfielder. Even more terrifyingly, both could score goals. The entire Brazilian team – even goalkeeper Allison has a headed goal to his name, one that secured Liverpool’s last-four spot last season in the last minute of their last game.

However, such nights of fantasy football don’t wink everyday. These are tricks hard to pull off every other game. Against tactical, pragmatic teams, the Canaries would not flap and flutter with as much freedom. In their quest for the sixth world title, there would come moments when they shed the flashiness for bark and bite. But then there is this night one could always revisit and be transported into a magical, unreal world of football. Like a re-calibrated VHS tape from the Pele era.