World Cup 2022 Highlights, Wales vs England Group B: England will next face Senegal in the round of 16. Wales finished in last place in the group and has been eliminated. 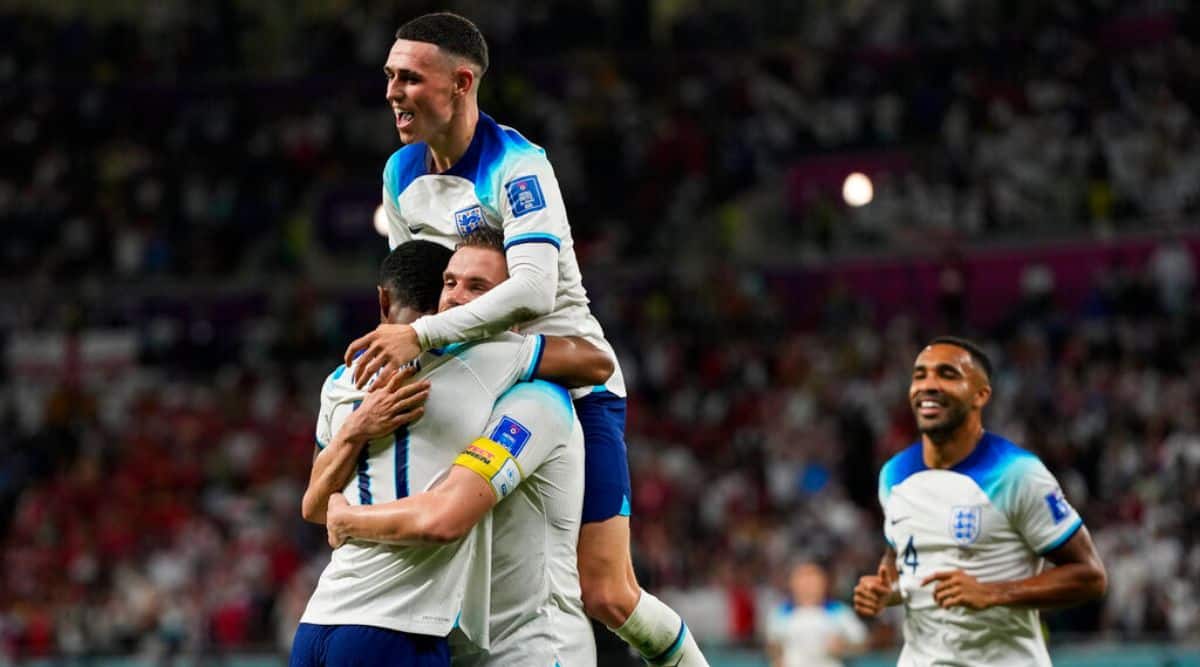 Wales vs England, FIFA World Cup 2022 Highlights: Marcus Rashford and Phil Foden both scored Tuesday to put England into the last 16 of the World Cup with a 3-0 victory over Wales. England coach Gareth Southgate opted to add both players in the starting lineup for the team’s final Group B match and they responded with all three goals — two from Rashford and the other from Foden. England will next face Senegal in the round of 16. Wales finished in last place in the group and has been eliminated. In the other group B game, USA defeated Iran by 1-0 to advance along with the Three Lions.

In the earlier kick off, Cody Gakpo netted his third goal in three games as the Netherlands comfortably beat World Cup hosts Qatar 2-0 at the Al Bayt Stadium on Tuesday to secure top spot in Group A and advance to the knockout stages. The Dutch, who finished with seven points from their three group games, will be joined in the last 16 by Senegal, who knocked out Ecuador by beating them 2-1 to end up second on six points.

In the other match of the night, Captain Kalidou Koulibaly’s second-half strike earned Senegal a 2-1 win against Ecuador that sent the African team into the knockout phase of the World Cup for the second time on Tuesday.

And peep peep!!! It's all over. England's dreams remain intact as Wales's are shattered. England will meet Senegal next. They have never lost to an African nation in the World Cup. A mouthwatering clash awaits.

The Three Lions are in the knockouts 👊#BBCFootball #BBCWorldCup pic.twitter.com/mWXZ84KW1a

Four minutes added on and England are in the attack with Wilson. Nothing comes off it as Wales clear. And a miss from a corner. Maguire finds Stones in front of goal. He gets under it and hits it over the bar!!! The goal was gaping.

England are playing possession football as wales try to break them, down. A couple of awry shots from distance don't do much. England looking very very comfortable.

81': Belligham gets ball stuck to feet

Jack Grealish with the ball. Cuts inside and feeds Bellingham as the ball is stuck under the feet of the youngster. Wales gladly hooves it away.

Jude bellingam with ashot obn target now. Ward saves, falls to Foden but he has smashed it behind. The gaol was at his mercy. Looks like, he couldn't control the ball.

75': Rashford off, Grealish on

Mo hattrick today as Rashford is subbed off for another offensive change by Southgate. Jack Grealish is now on for him. It's a cCity man replacing a United man. You love to see it.

And that's another intelligent dart from Rashford as Wilson feeds him near the right flank. The Manchester United striker shoots only to find the outstretched boots of Ward.

67': Rashford with the brace

Another England change as RB Trippier replaces LB Shaw. And rashford has scored again!!!!! Gets the ball in the right flank, cuts inside and shoots. And it's gone through Wade's hands and legs!!!

My man of the Match. Rashford, what a baller 🔥🔥🔥 pic.twitter.com/d4TGC5MICU

Another injury to Wales as Ben Davies has gone down. He'll be replaced by Joe Morrell. In other action, Ramse is booked for a poor tackle on Henderson.

Substitutions galore for England now as Kane, Walker and Rice are withdrawn. they'll be replaced by Wilson, Philips and Trent Alexander Arnold. Huge names off the bench.

What an ambitious from Moore. That has swerved and forced Pickford to make a fine save. Wales will not go down quietly.

And that's another goal!!! Wales lose the ball again.Kane plays a sublime pass, across the goal and that has been turned in by Phil Foden. In 98 seconds, England double their lead.

49': Rashford fires England ahead from a free kick

Foden runs past a few Wales players. Like a tracer bullet if you can quote a certain Ravi Shastri. But he has been fouled and England have a free kick. And Marcus Rashford has fired in from the free kick!!! I can't believe my eyes!!! The first direct free kick goal scored in this tournament.

Big change for Wales as Aaron Ramsay has the captain's armnband. that means Gareth Bale has given way to BrennanJohnson.That might be the last time we see Bale in a red Wales shirt.

WAL do not paint a pretty picture

HT: Wales 0-0 England#WAL are yet to have a touch in #ENG's penalty area#WALENG | #FIFAWorldCup pic.twitter.com/UnchxYDRdT

Late late surge by Wales as Allen gets a ball in a rather unfortunate position and he shoots.... And that's well wide. Pickford undisturbed. We are 0-0 at half time. Stay tuned for the 2nd half.

5 minutes have been added and Wales keep losing the ball in dangerous positions. Kane gets the ball and shoots, only to be deflected behind for a corner. Deep corner. Sones gets the head. it's ultimately collected by Ward.

A lot of movement going on in the Wales half of the field as England have bombarded their box with attackers. Wales clear constantly but the waves of attack don't seem to stop. 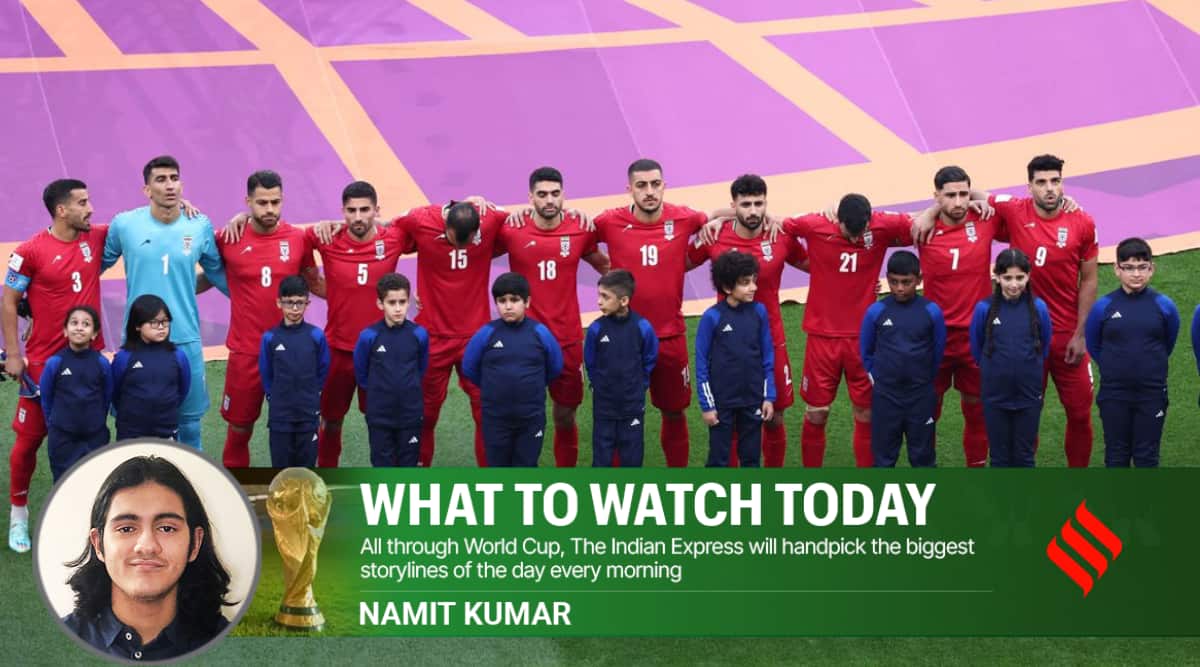 Iran players line up during the national anthems before the match. (Reuters)

Iran vs USA: Sporting spectacle with a geopolitical twist

Two days prior to their crucial group-stage encounter against the United States at the FIFA World Cup, the Iranian football federation called for the disqualification of their opponents.

The reason: the US Soccer Federation (USSF) posted an image of a doctored Iranian flag, without the country’s official emblem, on social media. The two posts were later taken down, but per The New York Times, the US confirmed the omission was intentional, meant as a show of support for the women in Iran.

The fans screamed for Qatar. Their passion hid a secret 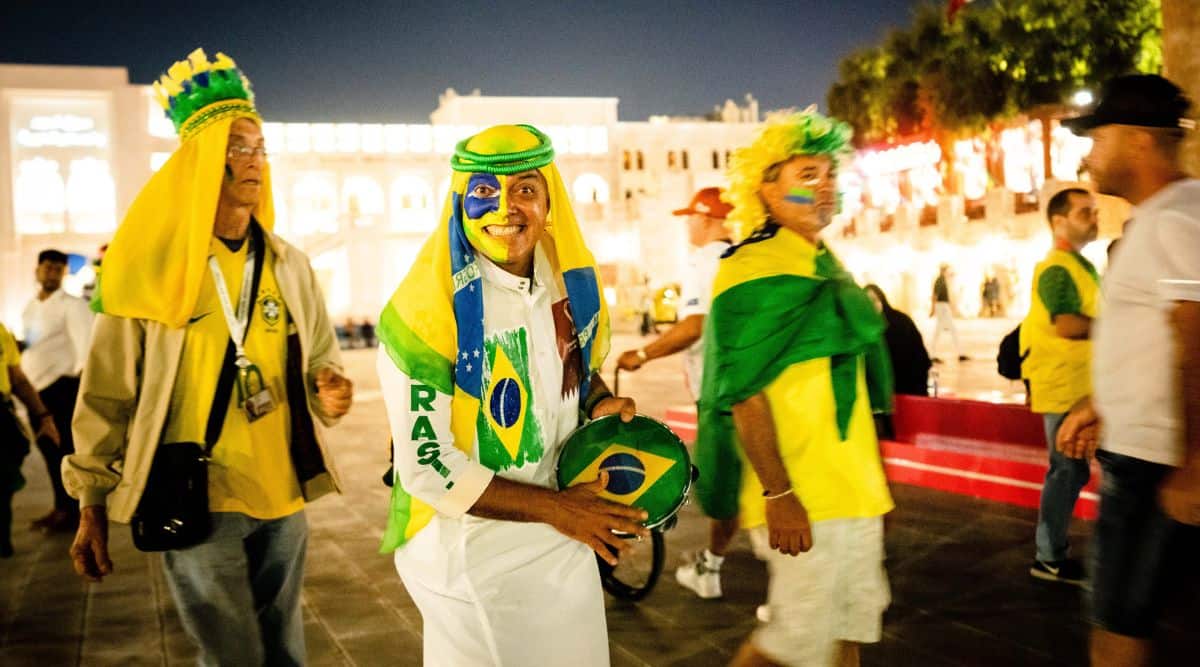 Midway through the second half of Qatar’s match against Senegal at the World Cup, the drumming stopped as a man in a bucket hat and sunglasses rose and asked for quiet.

Moments earlier, a section of the crowd — more than 1,000 strong, almost all men, all of them in identical maroon T-shirts with the word “Qatar” in English and Arabic — had been chanting in unison at the direction of four fan leaders. But now the sea of men understood what was expected, and they followed the order and fell into a strange silence as the match noise swirled around them inside Al Thumama Stadium. (Read More)