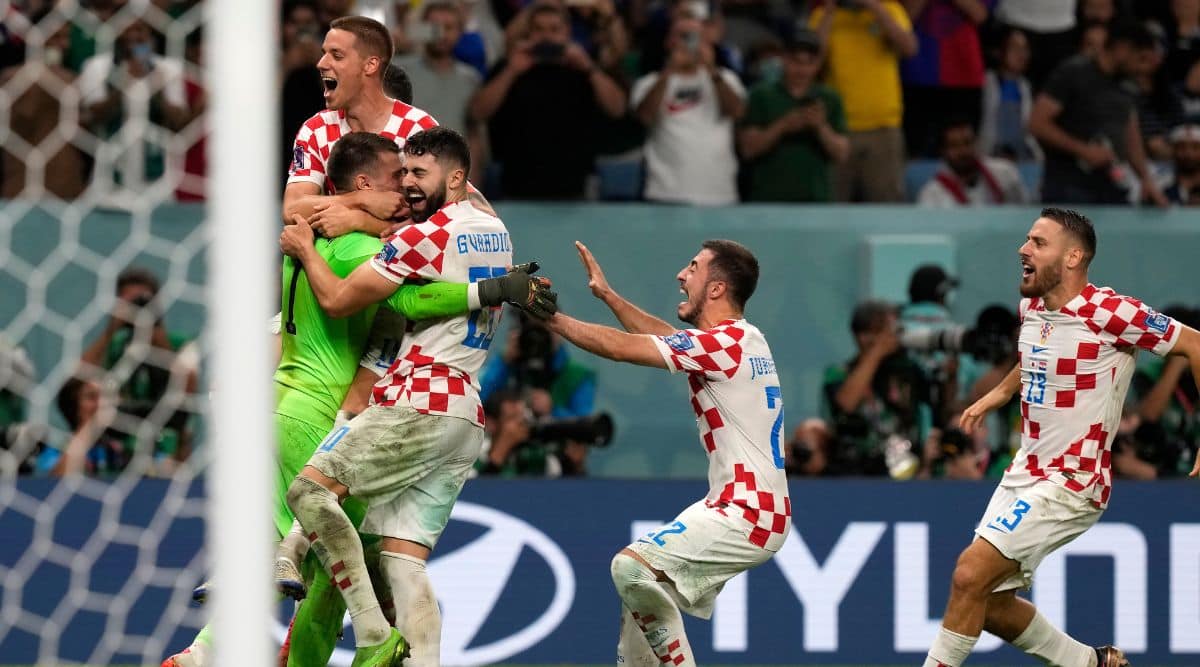 Croatia's goalkeeper Dominik Livakovic is celebrated after winning the penalty shootout of the World Cup round of 16 soccer match between Japan and Croatia at the Al Janoub Stadium in Al Wakrah, Qatar, Monday, Dec. 5, 2022. (AP Photo)

Japan took the towards the end of the first half as Daizen Maeda scored from a header. Croatia would also use the same way to equalise, early in the second half. Ivan Perisic scored his 10th goal at major tournaments, surpassing Davor Suker to become Croatia’s top scorer at major events.

Blue Samurai captain on the mic

Livakovic part of an exclusive club!

3 - Croatia’s Dominik Livakovic is the third goalkeeper to make three saves in a single World Cup penalty shootout after Portugal’s Ricardo in 2006 versus England and Croatia’s Danijel Subasic versus Denmark in 2018. Hero. pic.twitter.com/7BrtzYZbmM

Penalties: As it happened

Venkata Krishna: Before this match Dominik Livakovic had saved 14 off the 54 penalties. And today he made three saves to take Croatia into the quarterfinals of the World Cup.

His 3 penalty saves sends 🇭🇷 to the quarterfinals! pic.twitter.com/WdmYVgeTR5

Agony for the Asian side, another Round of 16 exit for the Blue Samurai and the faces tell a story. Meanwhile the 2018 runner ups progress through to the quarter finals.

Maya Yoshida's penalty is saved by Livakovic and Croatia are on the brink.

Takuma Asano had to score and score he does.

Marcelo Brozović converts from the spot and Croatia lead by two.

Kaoru Mitoma misses from the spot and Japan have missed two in a row now.

Nicola Vlasic scores to the right of Gonda and Japan lead.

As the shootouts are upon us, good time as any to revisit the most ridiculous of them all - no, not Diana Ross of US 1994 opening ceremony, but from last year. Presenting Japan's high-school football shootout. Watch and weep!

And in today’s episode of mad things to happen in the All Japan High School tournament… a 30 second penalty run-up pic.twitter.com/wL7hqeXYSA

Minamino to take the first penalty. Livakovic takes his place in front of the goal as the referee reminds him of the rules. AND.......Minamo's attempt is saved by the Croatian GK.

Penalties: Croatia go in without their 2018 heroes

End of extra time, penalties it is!

So, the inevitable has become the reality. Both the teams created good tempo in that second period of the extra time but 30 more minutes were just not enough. Penalty shootout, a first at these World Cup finals to decide which of these two will progress into the quarter finals.

Just a minute of added time, meanwhile Japan fail to clear their lines and Majer has a good chance on the edge of the box, but he drags his shot wide.

115': The music getting louder. The search, more desperate

Japan have the ball to the left of the Croatian goal. Sakai has the chance to find his teammate in the six yard box but his cross is straight to Livakovic, who makes no error in gathering it clean.

The Japan fans have been immense at these finals in more than one way and their music is only getting louder as their team looks for that goal with a penalty shootout looming large.

Gonda catches the ball from a cross and tries to find Ito with a long kick up the pitch. Gvardiol does well to intercept and put pressure back on Japan.

Meanwhile, the Japan keeper releases a quick kick towards Asano near the halfway line but the Croatian backline is in place to avoid a catastrophic counter.

110': Japan searching the winner as well

Mitoma finds himself in a good position again but chooses to cross this time rather than shoot. The chance comes to nothing as Japan also look to push forward in search of what would most likely be a winner.

Four changes in ET have allowed Croatia to introduce fresh legs and push forwards. Taking off Modric, Kovacic and Perisic, the 2018 runner ups have expressed that they want to find a goal in ET and go for a win pre-penalty shootout.

Can Japan’s momentum take them through to the last 8?

Japan’s national team will carry their remarkable momentum – beating both Germany and Japan to top the ‘group of death’ this year – into a difficult test against the talented and experienced Croatian team.

Much of Croatia’s nucleus is made up of the same players that took them through to the final of the 2018 World Cup, including last edition’s Player of The Tournament Luka Modric. Modric remains the X-factor, but their engine-like midfield which also contains Mateo Kovacic and Marcelo Brozovic, runs the show.

Japan are likely to follow the same blueprint they have followed for the rest of this tournament, staying patient in their structures 5-2-3, not keen on holding much of the ball, and waiting for the right moment to hit on the counterattack.

In that case, Josko Gvardiol, Croatia’s standout performer at the World Cup and one of the most promising defenders in Europe, will play a crucial role in both being switched on in the last line of defence, and progressing the ball as his side builds up from the back. (READ MORE)