World Cup 2022 Highlights, Portugal vs Uruguay Group H: It was a second straight victory for Portugal, which became the third team to reach the last 16 after France and Brazil. 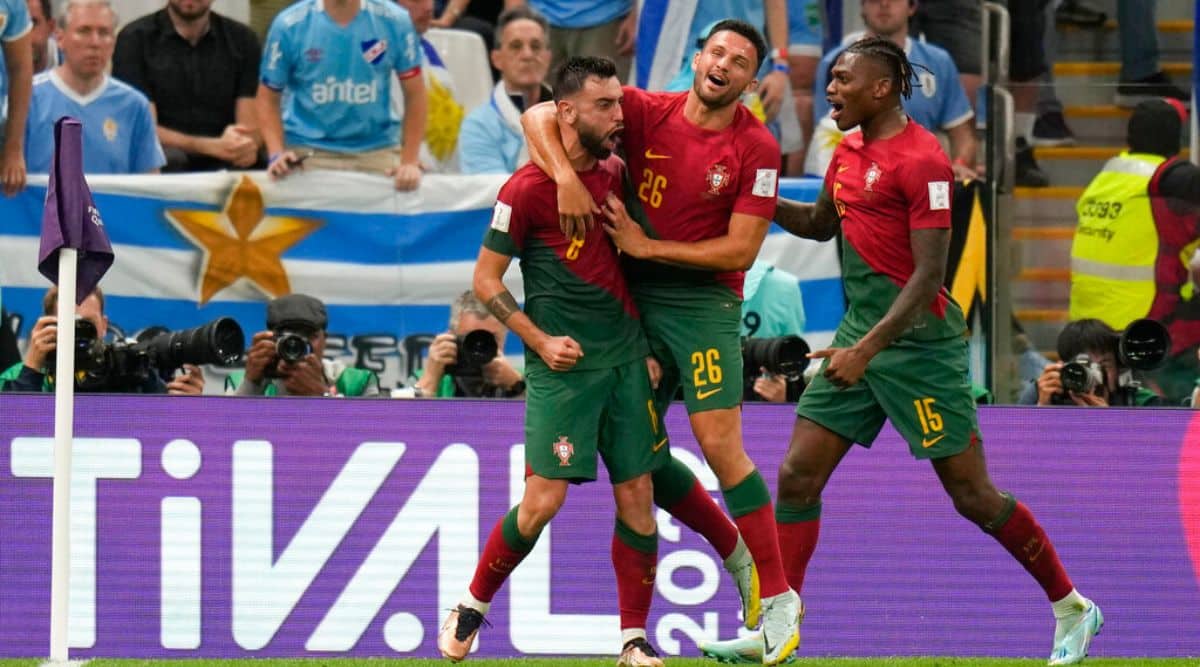 Portugal vs Uruguay, FIFA World Cup 2022 Highlights: Cristiano Ronaldo thought he scored but the goal was eventually credited to Bruno Fernandes in Portugal’s 2-0 win over Uruguay on Monday, a result that secured the team a place in the last 16 of the World Cup. Fernandes curled in a cross from the left that barely went over the head of Ronaldo and bounced into the far corner of the net in the 54th minute to give Portugal a 1-0 lead. Ronaldo wheeled away in celebration, believing he had scored his ninth World Cup goal and second of this year’s tournament. After repeated close-up replays, it was awarded to Fernandes, who added a second goal from the penalty spot in stoppage time after a handball by Jose Maria Gimenez.

In the last match, midfielder Casemiro showed his misfiring strikers how to finish on Monday when he lashed in an unstoppable late shot to give Brazil a 1-0 win over Switzerland that sent them into the World Cup knockout stage with a game to spare. In the earlier match, Ghana defeated South Korea in a thrilling contest which saw the African nation run away with a 3-2 victory. Before that, Cameroon and Serbia played out a 3-3 draw. Cameroon hit first with a Jean-Charles Castelletto goal in the first half that was nullified in added time by Pavlovic and Milinković-Savić. Mitrovic would add another early in the second half before Aboubakar and Choupu-Moting put Cameroon back.

We are into the 9th minute of the official added time. Shouldn't be long now. And that's all she wrote. Portugal complete their 2018 payback against Uruguay. They qualify for the next round. Uruguay have to beat Ghana in the last match day. Can't wait for that!!!

Portugal have booked a place in the round of 16!#FIFAWorldCup #Qatar2022onMG pic.twitter.com/O2bQhEiEFU

Late late chance for portugal to make it 3 but the goalie is equal to it. And it's Fernandes again who has now hit the post. What a game this guy is having.

Bruno steps up. There's a little hop and skip and he makes the URU goalkeeper go the other way while calmly placing the ball to the right of the goalie.

Easy second goal for Portugal during the extra time by Bruno Fernandes.

Portugal stringing passes together in front of the Uruguay box. There was a shout for handball by Bruno and the referee is now checking it. And he has given a  penalty. No idea where else the defender was supposed to put his hand while tackling but the new rules are more often than not confusing. Portugal players are now protecting the penalty spot so that the Uruguay players don't damage it too much.

Uruguay try to keep mthe ball and build. Get a free kick for a foul on Pellistri. Short free kick. And Valverde gets the ball a few yards out of the penalty box. Shoots and that's gone well over the bar.

Again!!! How has that not gone in. The free kick was whipped in, falls kindly to Suarez. The gaol was gaping partially but he shoots in the side netting. Uruguay are threatening to break down the door.

Another swift run from Uruguay as Costa has to come out and parry a cross which evades an onrushing URU attacker.

What an effort from Gomez!!!! Pellistri with the lay off. He has been bright and positive. Gomez hits the ball first time. Beats the keeper but finds the psot. Portugal can breathe again.

Suarez finally coming on as he replaces Cavani and Darwin Nunez is aloso changed for Gomez. Can these two put Uruguay level?

Portuguese change now as AC Milan's main man Leao is brought on for Ruben Neves. He got on the scoresheet against Ghana. Will he do it tonight?

65': How long till Suarez is brought on?

Uruguay are creating chances without the finish. You have to wonder how long Luis Suarez will be kept on the bench. As another move dissipates, we may see him very soon.

Here's what went down. It initially looked like Bruno's cross was met by Ronaldo, who was claiming the goal. Ultimately after long deliberation the goal has been awarded to Bruno.

Here's how the goal went down

And it's RONALDOOO!!!!!! The deadlock is broken by the Portuguese magnifico!!! Delcious ball in from fernandes and Ronaldo gets his head to it for the goal!!!

Game halted as a supporter has come binto thevfield with a rainbow flag. The security are after him as the camera quickly cuts to the referee with the flag. As the match starts, Joao Felix hits the side netting after a breakaway from Portugal.

The second half has started in the same vewin as the first. Portugal trying to shoot from distance and Uruguay getting away with the counter attcak before being cut off.

Peep peep. Portugal gets us underway for the 2nd half. Let's hope we have something to cheer about in this half.

8 - It is the first time that Portugal have made so many shots (8) in the first half of a #FIFAWorldCup game and none of them were on target. Miss.#PORURU #POR #Qatar2022 pic.twitter.com/qoHZocsGcv

And that's the peep peep from the referee and a rather toothless first half ends. That's thev 17th match this tournament to end on a 0-0 draw at half time. Hopefully that changes in the second half.

Bentancur went closest but it's another goalless first-half. pic.twitter.com/Nzy5inQ8sR

Olivera is booked for blocking a free kick off Bruno. No reason and point of doing that and now he has to be careful for the rest of the match. Pretty pointless booking. 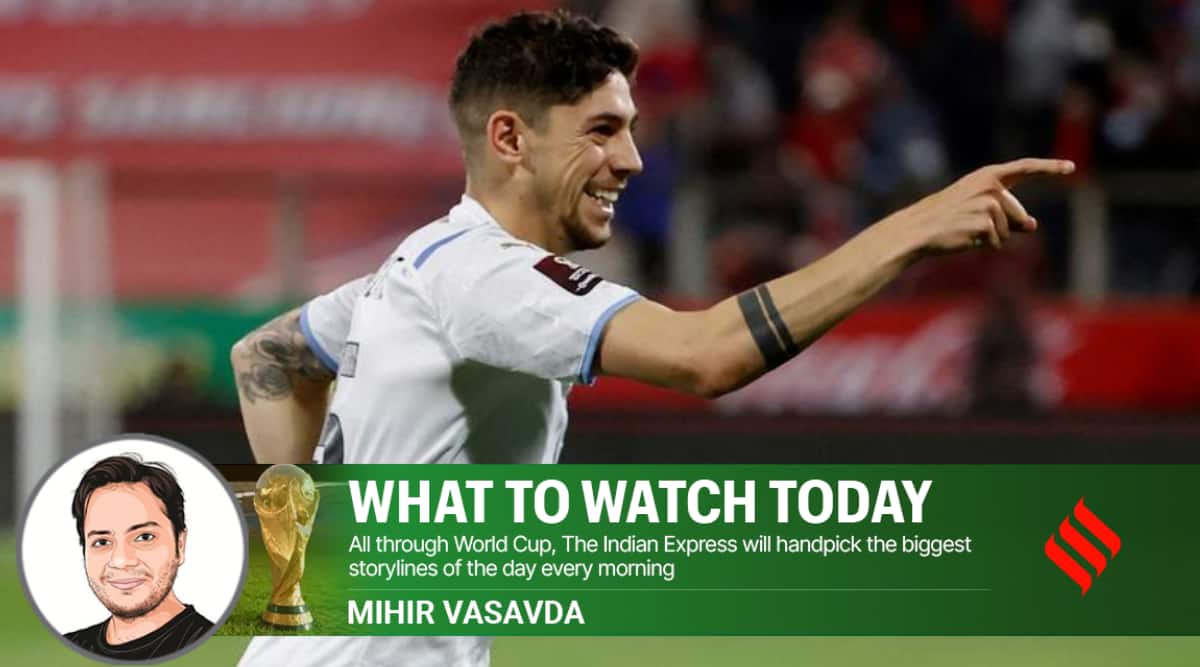 Portugal vs Uruguay: Fede Valverde is an embodiment of the spirit of Garra Chharua

Valverde is an embodiment of the unique Uruguayan spirit of garra chharua. The phrase describes the ability to overwhelming odds with dollops of fighting spirit. Uruguayans use this phrase to describe their team, which often punches above its weight in the World Cups. The word garra means claw, which represents the ability to fight with grit and tenacity, and chharua is a reference to the indigenous people who live in Uruguay. (Read More) 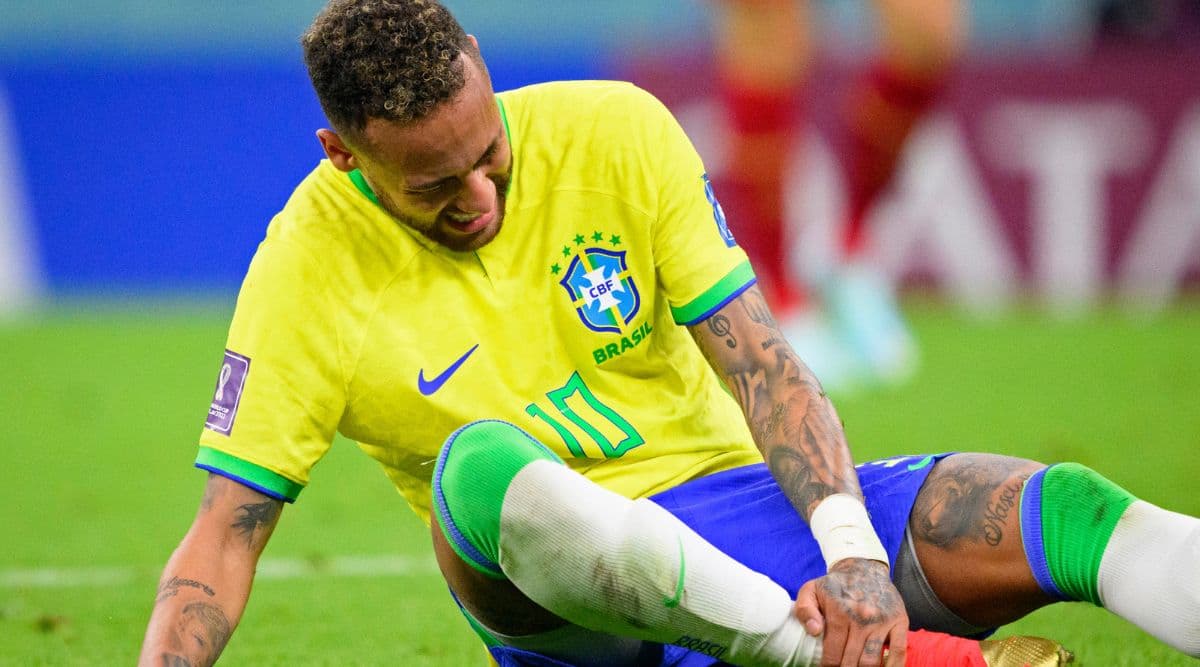 Brazil's Neymar grabs his ankle after an injury. (Reuters)

On social media, Neymar, who had damaged his right ankle, showed that he’s being treated with a compression boot. The Marca newspaper reports that the equipment uses NASA technology that accelerates healing. 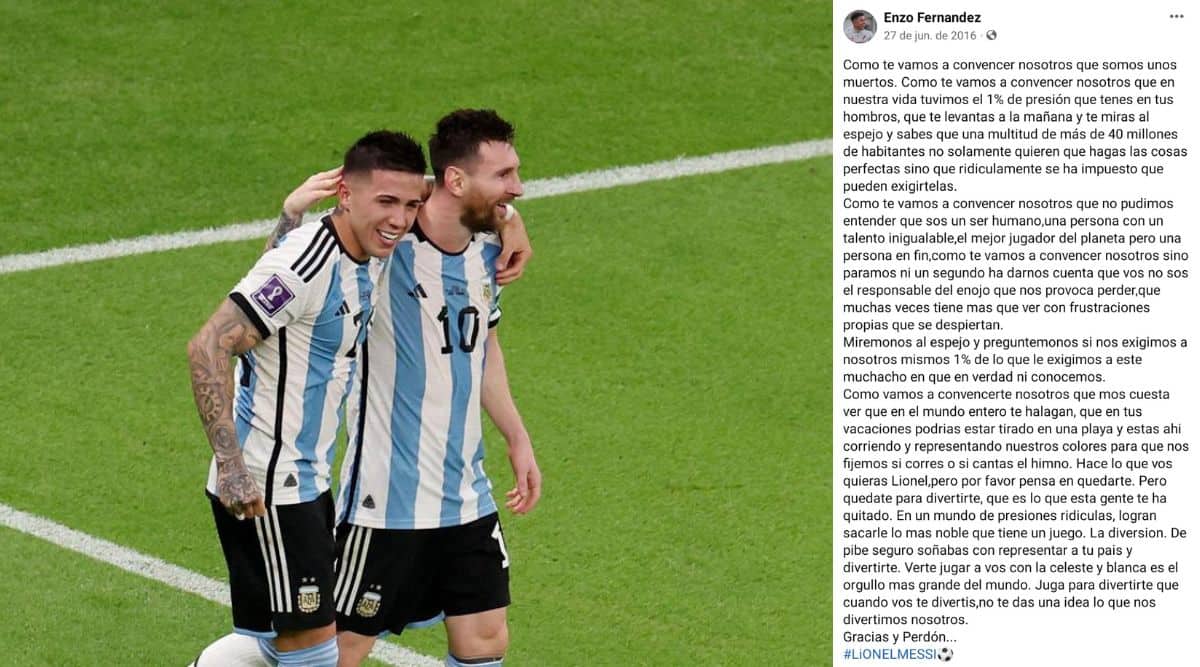 When the 21-year old Enzo Fernandez scored a gorgeous second goal to ensure Argentina won the game against Mexico, Leonel Messi would say, “I’m not surprised by Enzo, I know him and I see him train every day. He deserves it, because he’s a spectacular player”.

In 2016, after the Copa America tournament, when Messi had announced his retirement from playing for Argentina -a decision he would retract after two months, the teenaged Fernández penned an emotional letter to his hero, pleading with him to reconsider his decision. (Read More)