Inside a fan zone for migrant workers: ‘Our World Cup too, our stadium too’

Far from the dazzling skyscrapers of central Doha, this is where the labour force converges to bury the day's hardship and fill their lives with some joy. The disparity between the plusher Fan Zones, set up for those who have flown in from all over the world, is obvious. 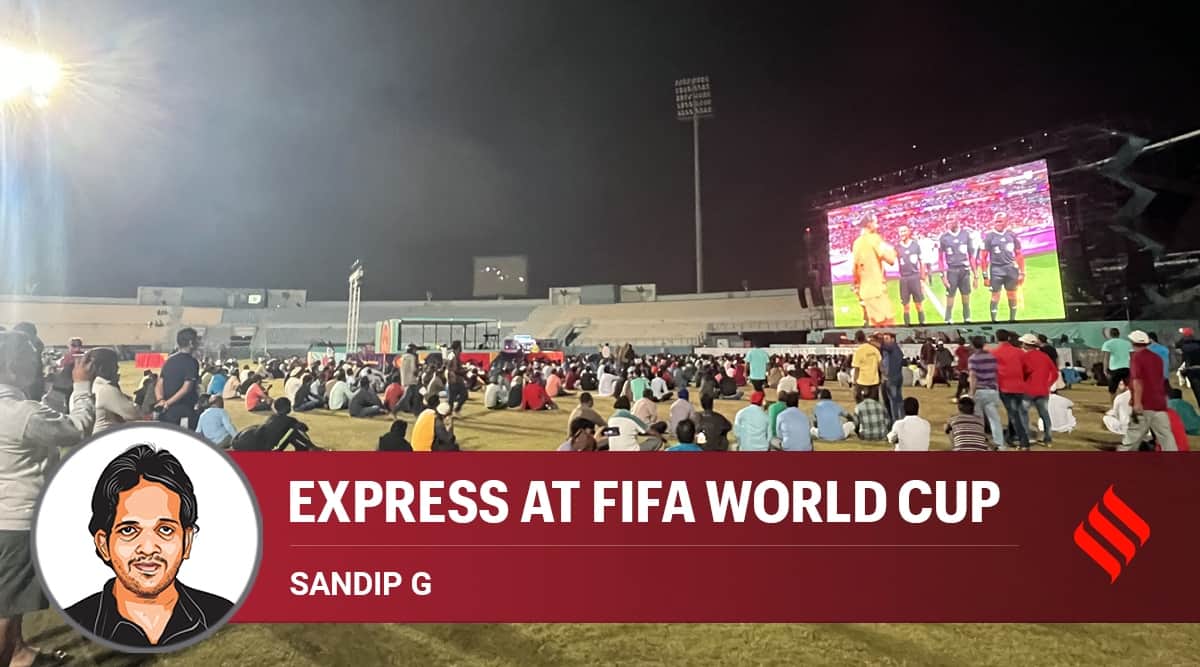 At the Fan Zone in the Qatar cricket stadium. (Express photo by Sandip G)

ON THE giant screen erected on a platform at the practice nets of the Qatar Cricket Stadium, Senegal’s Kalidou Koulibaly scores off a free-kick to take his team to the last-16 of the football World Cup. Below the screen, Samuel and his friends burst into an impromptu dance. They are soon joined by the other Senegalese among the 1,000-odd spectators, most of them on the grassless grassbank or scattered in the gallery and on the wooden planks.

As the celebrations fade, Samuel clutches a rosary, praying the next 20 minutes pass without Ecuador equalising. When the final whistle blows, Samuel draws a cross in the air and quickly calls a friend to arrange for a party. “One of the happiest days in my life. I was a kid when Senegal last qualified for the pre-quarters (in 2002),” he says, beaming.

Welcome to Asian Town — and this special Fan Zone for Qatar’s migrant workers, one of the two set up in the country, with the other in Al Khor about 70 km away.

Far from the dazzling skyscrapers of central Doha, this is where the labour force converges to bury the day’s hardship and fill their lives with some joy. The disparity between the plusher Fan Zones, set up for those who have flown in from all over the world, is obvious.

Here, there are no beer stalls — lest brawls erupt, a policeman says — no frisking, no McDonald’s outlets, no faces with welcome smiles, no women fans, and no t-shirts and shorts, only flowing kurtas and faded shirts. At half-time, 1990s Bollywood chartbusters set the mood, and a woman organises a quiz competition with the winners receiving t-shirts and other merchandise.

“I don’t have a QID (Qatar Identification Card), I can’t apply for a Hayya (stadium entry permit) and buy a ticket because that will be expensive. We are barely making ends meet,” says Samuel, the tone of jubilation giving away to hopelessness.

He landed in Doha with dreams of becoming a security personnel. “Africans are in demand in this profession,” he says. But he ended up as a painter — and is part of a 20-member team painting a 10-storey building near the Old Airport, earning around 1,200 Qatari Riyals (Rs 26,000 approx) a month. The money is “just enough to sustain” even though Samuel stays with 10 friends in a two-room apartment on the outskirts of Asian Town.

Behind this Fan Zone is a medium-sized shopping mall and a few semi-rundown theatres that mostly screen Malayalam, Hindi and Bengali movies. There are packed tea-stalls with “kadak chai” for a riyal and “samosa-kachori” for two riyals. Deep inside Asian Town, they claim that you can even get cheap alcohol in black or home-made country liquor, which was in “huge demand during the lockdown”. “It’s a different world from Doha,” says Samuel.

But then, not all those who gather here are football diehards. Many come to spend an evening with friends, to soak in the moment, to get a second-hand experience of what the world that has descended in Qatar is experiencing. Says Riyas from Peshawar, who works at a construction site for a monthly salary of 1,100 riyals, just above the minimum wage of 1,000 riyals. “I don’t understand football. I don’t get time to watch any sport, not even cricket. But I stay near the Fan Zone so I thought I would just take a look. It has a festival kind of a feel, mela jaisa (like a fair),” he says.

Now, he is waiting for the day Pakistan qualifies. “When I heard about the World Cup, I thought Pakistan would be there. Then, a friend told me you need to qualify. One day, God willing, we will also qualify,” he says. The excitement around reminds him of the cricket he used to play under streetlights back home. “I haven’t been home in three years. They are happy I am here because I am sending money,” he says.

Everyone narrates the same story — of debts and wars, of joblessness and hopelessness back home.

Baba Ali, a carpenter from Nepal, has been in Qatar for 30 years, and says he has seen the city being built from “mere sand and dust”. He says several of his friends and relatives have worked on stadium sites. And that’s the reason he comes here every day, although those who helped build the stadiums and infrastructure are far from the revelry rolling out across the country. So close, yet so far away.

On the way out of this Fan Zone, at the gate, there is a FIFA message printed in Hindi. It reads: “Thanks for your contributions for delivering the best ever World Cup.”