World Cup 2022 Highlights, England vs Senegal: England, which reached the semifinals at the last World Cup in Russia, will face defending champion France at Al Bayt Stadium on Saturday. FIFA World Cup 2022 England vs Senegal Highlights: England captain Harry Kane scored his first goal of this year’s World Cup, helping his team beat Senegal 3-0 Sunday and setting up a match against France in the quarterfinals. Kane scored for the 52nd time for his country to move within one of Wayne Rooney’s England record. He also overtook Gary Lineker as his country’s leading scorer in major tournaments with 11 goals.

Jordan Henderson and Bukayo Saka also scored at Al Bayt Stadium while Jude Bellingham played a key role in the opening two goals. England, which reached the semifinals at the last World Cup in Russia, will face defending champion France at Al Bayt Stadium on Saturday.

England are almost near the finish line. Senegal's World Cup is almost over. A corner for Senegal and England clear. It's all over. England will face france next. What a mouthwatering clash that will be.

4 mins of extra time and Shaw floats in a ball. Mendy watches it sail over him and Rashford touches it and gets the side netting. He looks hungry for goals.

Mount fouls and it kick starts a Senegal attack. Sabaii sends one over and Maguire heads it clear. Senegal will at least like a consolation. Corner now, which si grasped by Pickford.

81': Philips on for Henderson

Kalvin Phillips on to replace Jordan Henderson as England look to close the game out from here.

Rashford plays a great pass to Harry Kane and almost a 4th for England. Beautiful one touch pass from Henderson to set Rashford up. If only Kane could get a toe to it.

Koulibaly goes into the book after a hefty challenge on Harry Kane. Captain on captain and it results in a booking for the African nation's leader. Mount and Dier come on for Stones and Bellingham.

Free kick for Senegal. Advantageous position. PM Sarr takes it and that has fluttered the side netting. Pickford had it covered anyway I think.

Saka idolised the Swedish midfielder  Freddie Ljungberg growing up. On top of this, the two crossed paths during Saka’s development. The former Arsenal midfielder helped develop Saka in his role as a youth coach in Arsenal’s Hale End Academy.

Senegal looking for a glimmer of hope. Nothing doing at the moment as Senegal's shots are getting blocked. England have kept Sarr pretty quiet in this half and in this match.

“Bukayo“, is a unisex name that means “Adds to happiness”.Bukayo is a name frequently used by the Yoruba tribe of southwest Nigeria.

And here comes Marcus Rashford and Jack Grealish to replace Bukayo Saka and Phil Foden. Senegal's night isn't about to get any easier.

Too many loose passes from Senegal at the moment as England's two holding midfielders are having a field day tonight. Rice and Bellingham are cutting off every avenue of a SEN attack and starting Englan's counters in a flash.

Why does England star Jude Bellingham have the no. 22 on his jersey?

One day, Mike Dodds, Jude Bellingham’s coach at the Birmingham City academy, was sitting in the car, just before a meeting with Jude, who was playing under-13s then, and been moved up in the age-groups.

“I remember wondering what position he saw himself as, because for Birmingham he could almost play in all the positions because the level at times was too easy for him. But going to England youth camps, where does he see himself then compared to some of the best in the country?” Dodds told Thesportsman.com.

“And I thought about how he can play in all positions, and then I just came up with the idea of adding the numbers together. I'm a little bit old school and I call the holding midfielder a four. I sat down with him, and then I just said ‘Look, I think you can be at 22.’”

“And I knew at that point, I had really hooked him, I could see it in his body language. From then on in, from probably the under-13s, everything we talked about was being a 22 and he just completely bought into it.

“It was literally something I thought about in the car. I knew having the conversation with him, I kind of pitched it to him around designing his programme around being a 22, and that's what his programme basically became for the best part of five or six years.”

When Bellingham moved to Borissia-Dortmund, Birmingham City retired the 22 jersey, as a tribute. No other kid can wear that in that club now.

Kane decides to go from goal from a fair few distance. Was looking for a pass but nothing was on so he decided to shoot. A sttinger which is spilled by Mendy.

And a minute later, Saka makes it 3-0. Long, long way back for Senegal. Foden plays a curling low pass and Ska lifts it over Mendy.

54': Saka balloons over the bar

Declan Rice wins possession from the midfield. Feeds Harry Kane who in turn sets off Saka, who is ultimately forced wide and shoots from a difficult angle which balloons over the bar.

51': All England at the moment

England are now trying to create more chances, winning the midfield battle and breaking up Senegal's play. They are navigating the tight spaces now.

Lovely ball by Maguie to Saka, who passes to Hendeson's whose cross is me by a Senegal head. Maguire sparys another long ball, this time on the right side but Bellingham can't find a way through.

Back live for the second half and England kick off. Pape Matar Sarr, Bamba Dieng and Pape Alassane Gueye brought in by senegal. England without any changes.

As it stands England will face France in the quarterfinals against whom they enjoy a head-to-head record of: 17 wins, 5 draws and 9 losses. However the Three Lions have won only one of their last 8 matches.

LOAD MORE
England vs Senegal: Even before their last 16 encounter, Three Lions shift focus to ‘quarterfinal vs France’ 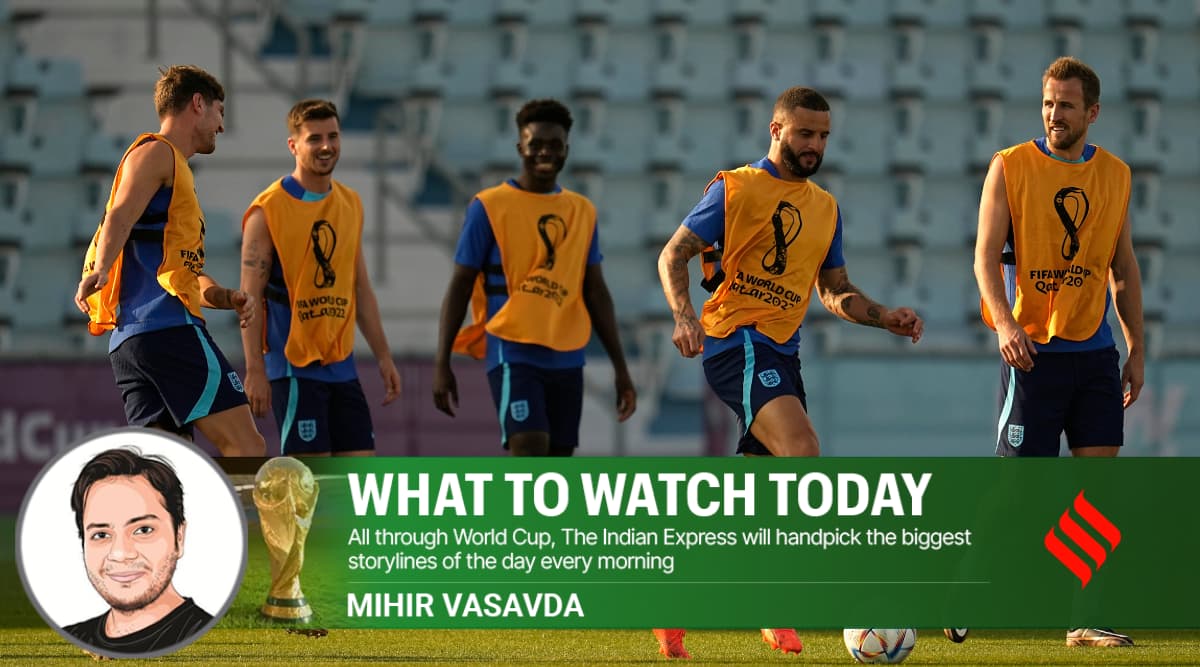 England are a team of talented, charming young men who are easy to like. However, it’s the noise around them that invariably triggers schadenfreude. On this occasion, ahead of their Round-of-16 match against Senegal, Gary Lineker is the guilty party.

On Friday, he was quoted as saying that Gareth Southgate should ‘rest’ right-back Kyle Walker against Senegal for Sunday’s World Cup Round-of-16 match so that he is fresh to take on Kylian Mbappe and France in the quarterfinal.

“Kyle Walker should not be in England’s team to play Senegal, and I will tell you exactly why. We, England, cannot afford for Walker to get injured in that match. Because he is just about the only full-back on the planet who can compete with Kylian Mbappe,” Lineker told the BBC.

“Mbappe is the French team. Why would you take the risk of him (Walker) getting injured, particularly in that position? I don’t want to sound arrogant and that we are taking Senegal for granted, but why risk Walker?”

The moment Lineker added a ‘but’ in that sentence, everything else he added lost relevance. He would even quote tweet the BBC article on his views with: “No Brainer”.

Lineker, of course, isn’t the only one. Gary Neville told Sky Sports: “It looks like a collision course waiting to happen, doesn’t it? Mbappe versus Walker.” His former Manchester United and England defensive partner Rio Ferdinand said on his YouTube channel: “For me, Kyle Walker is the only defender on the planet right now that will stand there and go to Mbappe: ‘Right, 1-v-1, let’s have a race’.” (READ MORE)