Portugal vs Switzerland: Does Cristiano Ronaldo help or hinder his national team?

Holding the dubious distinction of never having scored in a World Cup knockout, and sullen after being subbed vs Korea, the 37-year-old didn't really impress coach Fernando Santos with his attitude. His defensive contribution is suspect, but can Portugal do without their biggest goal-scoring option against the Swiss? 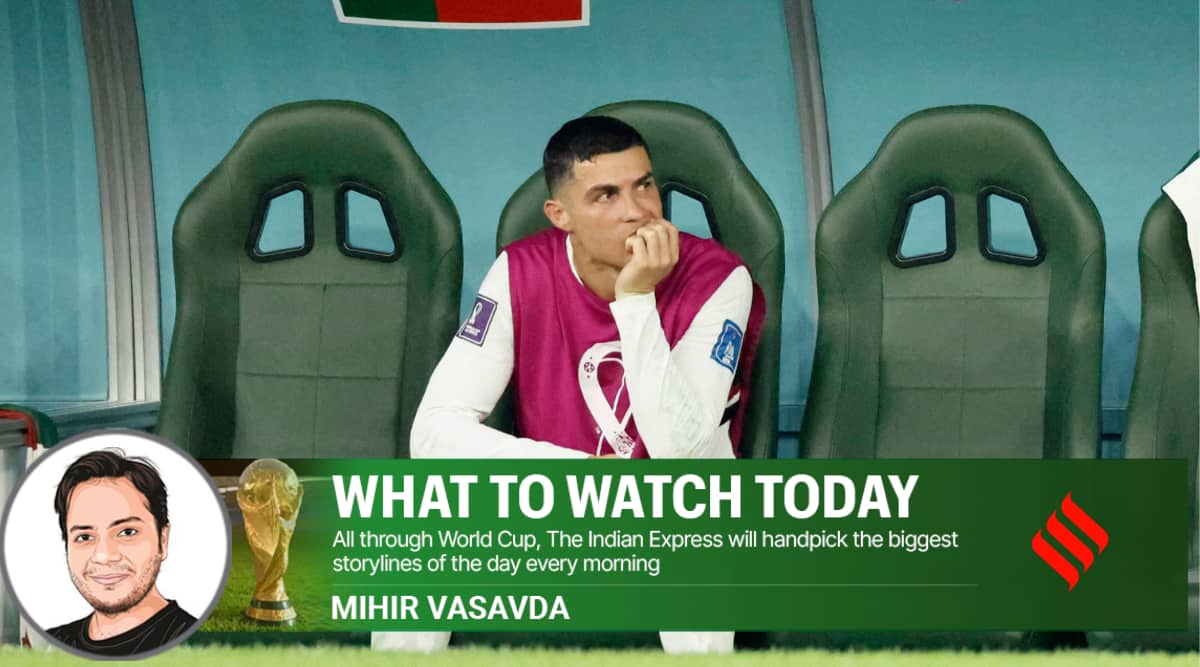 Showcase game
Portugal vs Switzerland (Round of 16)
12.30 am (Tuesday), Lusail Stadium

So, the people have spoken.

Seventy per cent of the people surveyed by Portugal’s widely-read sports newspaper, A Bola, do not want Cristiano Ronaldo in the starting line-up for the last-16 match against Switzerland on Tuesday. “He is no longer CR7,” one of them said. “He is CR37.”

Jersey number and age aren’t the only figures associated with Ronaldo at the moment. On Monday, Saudi Arabian club Al Nassr made an offer to Ronaldo, a free agent, to join them for a reported salary of 200 million euros a year. Amidst the negotiations, how focussed will he remain for Portugal’s first knockout stage match is also a question Portugal’s supporters – who have steadfastly backed their captain in the past – are grappling with.

Al Nassr official proposal to Cristiano Ronaldo is on the table, as called last week. €200m per year until 2025, but including sponsor deals. Documents are being checked. 🚨🇵🇹🇸🇦 #Ronaldo

There’s still nothing signed, agreed or approved by Cristiano. Focus is on the World Cup. pic.twitter.com/FUTxOnoDI7

And then there was his angry reaction after being subbed during the last group stage match against South Korea. Coach Fernando Santos wasn’t pleased. “Have I seen the images when Ronaldo was subbed? Yes. Did I not like what I saw? No, I didn’t like it one bit,” Santos said.

Yet, it is unlikely that Santos will confine Ronaldo to the bench for a tie as crucial as the World Cup round of 16, against an opponent, Switzerland, to whom they lost the last time the two teams played each other.

But it’s a question worth asking: does Ronaldo help or hinder Portugal?

READ |Ronaldo a misfit in modern football, who defies all logic to be central to Portugal’s fortunes

The stats prove his value. In the World Cup qualification stage, Ronaldo played more than any other Portuguese player – 810 minutes. He also scored the most goals – six. At the Euros last year, he was the joint top-scorer with five goals, three of them were penalties, although it didn’t mean a lot as Portugal were knocked out in the Round of 16.

It’s clear from this that Ronaldo is Portugal’s go-to option to score goals. What these numbers hide, however, is that Ronaldo becomes a burden on his team when they have to protect their lead. It happened during the qualifying round games against Serbia, when they wasted their lead during both legs, losing 2-1 at home and drawing 2-2 away (blowing up a 2-0 lead).

Those results took them to the playoffs instead of direct qualification. There have been similar results in the Nations League as well, apart from the Euros where Portugal lost to Germany and drew with France after Ronaldo himself had given them the lead.

The reason, primarily, for that is Ronaldo’s inability to offer anything more than goal-scoring. It’s a lot like his situation at Manchester United, where his stint ended in an acrimonious fashion, with the forward being benched for a majority of the season by manager Erik ten Hag because of his limited defensive contributions.

To be sure, Ronaldo is not expected to drop deep in his own half all the time and bail out his team. However, he is expected to lead Portugal’s press and his inability to do so repeatedly affects the team’s ability to win back possession deep into the opposition’s half. This puts additional pressure on the midfield and has a ripple effect on the defensive line.

Ronaldo, who’ll turn 38 in February, isn’t the same force in one-on-one situations, and has lost a yard or two of his speed, which means he can’t carry the ball with the same efficiency as he did, say, until a year or two ago. And his runs behind the defensive lines have all but nullified. It’s not a surprise that Ronaldo isn’t on the radar of any club in the so-called big five leagues of Europe.

For Portugal coach Santos, however, the only thing that’ll matter is his goal-scoring abilities, especially with Diogo Jota out injured.

So, even though people might not want him in the line-up, Ronaldo might be the first name on Santos’ team sheet. And there’s a personal record at stake, too, for Ronaldo – until the Round of 16 began, he shared a dubious record with Lionel Messi of not scoring a single goal in the knockout stages of a World Cup.

Messi ended that streak with a goal against Australia. If nothing else, that should be a key motivator for Ronaldo.

Other fixture on the day: Morocco vs Spain (Round of 16), 8.30 pm, Education City Stadium

Can you reverse artery blockage in your heart?