‘I lost a great friend’: Pele leads tributes as the world mourns Maradona

Diego Maradona had died after suffering a heart attack at his home in the suburbs of Buenos Aires, those close to him confirmed. 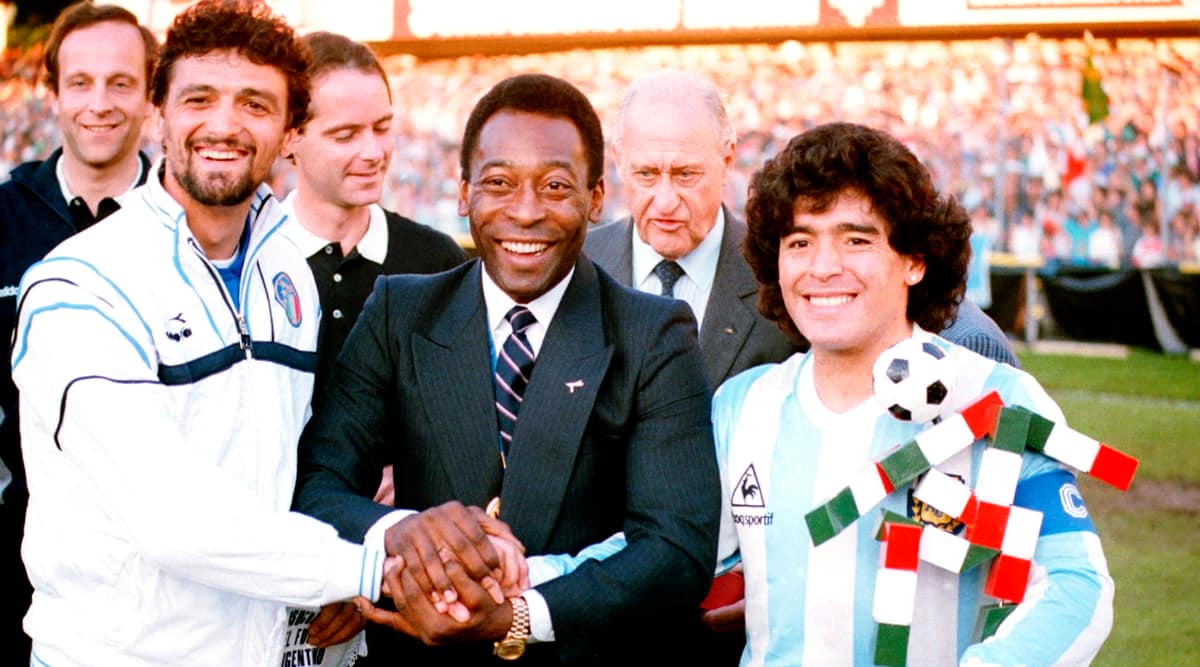 In this June 10, 1987 file photo, former Brazilian soccer player Pele, center, clasps hands with Italian captain Alessandro Altobelli, left, and Argentine captain Diego Maradona, after he is awarded the FIFA honor medal before the start of the final match between Argentina and Italy in Zurich, Switzerland. (AP Photo)

World soccer great Diego Maradona, died on Wednesday less than a month after his 60th birthday.

Maradona died after suffering a heart attack at his home in the suburbs of Buenos Aires, sources close to him confirmed.

Rising to stardom from a grimy Buenos Aires slum to lead Argentina to World Cup victory, Maradona was a rags-to-riches story in his soccer-mad homeland and gained the iconic status of fellow Argentines Che Guevara and Evita Peron.

One of the most gifted soccer players in history, Maradona’s pinnacle of glory came when he captained Argentina to win the World Cup in 1986 before plunging to misery when he was kicked out the 1994 World Cup for doping.

But he reinvented himself in a stunning comeback in 2008 as coach of the Argentina team, persuading managers that with sheer charisma he could inspire the team to victory, despite a lack of coaching experience.

Brazilian soccer star Pelé mourned the death of Argentine great Diego Maradona on Wednesday, following confirmation he had died of a heart attack earlier in the day.

“Certainly, one day we’ll kick a ball together in the sky above,” he said in a brief statement provided to Reuters by a representative.

Here are some of the reactions and tributes-

Diego #Maradona, the legend has left us. He was a magician who showed us why football is called “The beautiful game”.

My condolences to his family, friends and fans.

Watching this on repeat. What a legend. RIP #Maradona pic.twitter.com/JJT96tfqrL

My hero no more ..my mad genius rest in peace ..I watched football for you.. pic.twitter.com/JhqFffD2vr

Really sad to hear of the passing away of the legendary Maradona. He truly lived life king size & by his rules and set benchmarks on the field and off it too. RIP my friend. You will be missed

Big big loss! Our childhood star who gave us so many memories to cherish & celebrate. Saddened to hear about the demise of The legend #diegomaradona. You will live on in hearts & memories. pic.twitter.com/hyHbdSKqqi

I’ll never forget watching Diego Maradona as an 8 yr old at the World Cup in Mexico. Never seen anything like it on that stage since. Sad news #Maradona

Loved him as a kid 😢
RIP #Maradona

So sad to hear about legendary Diego Maradona passing away. Always been a huge inspiration for all sportsmen. His legacy will always stay. #Maradona #Legend pic.twitter.com/t6ewLiVJP9

Football and the world of sports has lost one of its greatest players today.
Rest in Peace Diego Maradona!
You shall be missed. pic.twitter.com/QxhuROZ5a5

Thank you for everything, Diego pic.twitter.com/bJ9l3ixY7A

“In our collective imagination Diego Maradona represents a certain glorious past, he’s a symbol of what we might have been,” popular culture professor at Buenos Aires University and Maradona expert Pablo Alabarces has said.

Diego Maradona (1960-2020): SRK, Mohanlal and others mourn the demise of football legend