Denzel Dumfries: the Netherlands defender, with roots in amateur football, who will have Argentina’s back line wary

Lionel Messi & co will be going up against Dutch forwards like Memphis Depay and Cody Gapko, but the team's most threatening attacking spark is actually a defender. 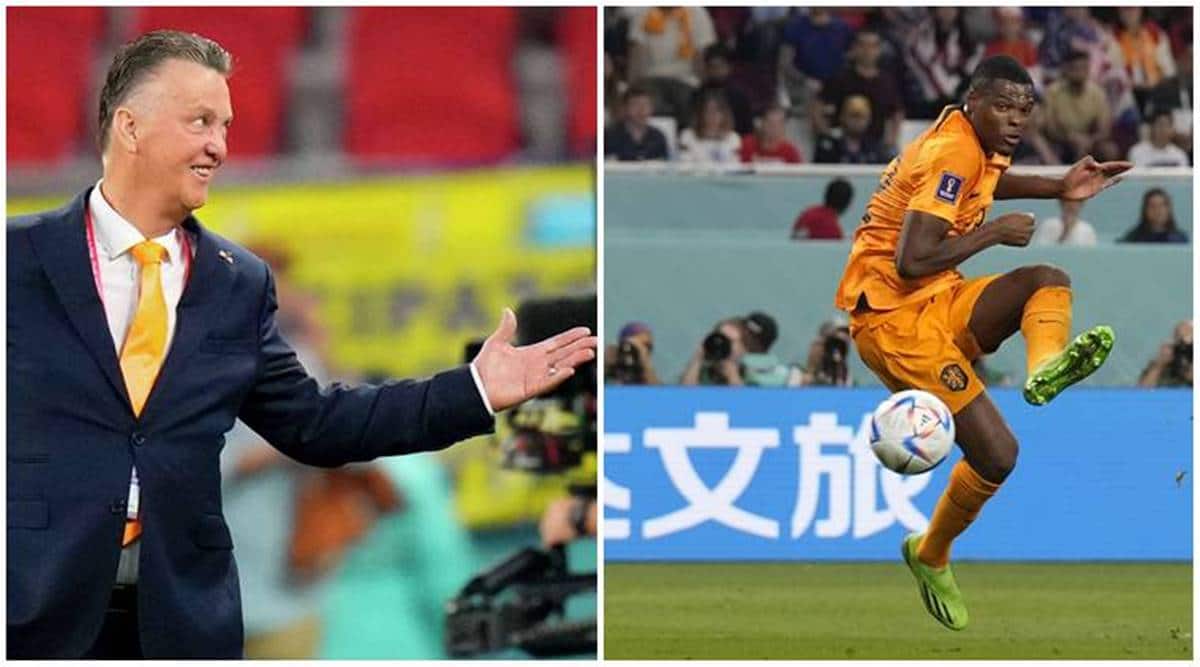 Louis Van Gaal and Denzel Dumfries. (AP)
Listen to this article
Denzel Dumfries: the Netherlands defender, with roots in amateur football, who will have Argentina’s back line wary
x
00:00
1x 1.5x 1.8x

Breakthrough performances of teenagers have been a highlight of this World Cup. From Spain’s Gavi, and Germany’s Jamal Musiala, to England’s Jude Bellingham.

For Dutch defender Denzel Dumfries – arguably Netherlands’ best player this tournament – playing for the Oranje was nothing more than a pipe dream as a teenager. Born to an Aruban father and Surinamese mother, his family moved to Rotterdam from Aruba prior to his birth in the Dutch city, where he was named after Hollywood actor Denzel Washington.

Dumfries does not boast of the kind of technical ability that the promising teenagers of this tournament do, since he did not hone his talents in an elite football academy, instead playing for local amateur club BVV Barendrecht until the age of 18, even getting an international call up to Aruba, for whom he made one official appearance.

After a long, uncertain road in the amateurs, Dutch second-tier team Sparta Rotterdam took a punt on him. Dumfries developed physically there, with pure power and pace becoming his strongest attributes, as he got promoted to the Eredivisie, joined PSV Eindhoven and rose the ranks to become captain of one of the country’s most successful sides. His place in Dutch football, however, remained uncertain until last year’s Euros, where he was the team’s best player.

Frank De Boer trusted his wing-backs to perform, but Netherlands largely underperformed as they crashed out to Czech Republic in the round of 16, which led to Louis Van Gaal’s arrival. The famed Dutchman’s approach has unlocked the very best of the wing-back, who never really plays wing-back.

Thriving in a unique system

There has been criticism of the Netherlands’ style of play under Louis Van Gaal at this tournament. With a rich history of possession-based football, pioneering the Total Football philosophy that continues to influence modern-day teams, they have gone for a more patient, conservative, and pragmatic approach.

Van Gaal has carped at the criticism of that style, and revelled in its recent effectiveness. The Netherlands have let go of possession, gone for fewer bodies in midfield often marking teams man-to-man to try to break them down and strike quickly on the counterattack. That plan was at its best against USA in the round of 16, with the Dutch pressing Tyler Adams – their creative outlet in midfield – out of the game and keeping the wide areas tight where USA like to cause overloads.

To do so, Van Gaal needs the right wide players and the right system, which is why Dumfries have been so crucial for the team. The Netherlands’ biggest strength this year has been their hybrid defensive plan that allows them to manage opponents differently. There are patterns of play that see them in a wide back three, a narrow back four, and even a wide back four with Frenkie De Jong falling into defence.

On paper, they play a back five out of possession, but in possession it usually turns into a back four, with Daley Blind tucking in at left back and Jurrien Timber tucking in on the right – explaining his inclusion over Matthijs De Ligt, a far more accomplished traditional centre-back but not as effective on the right.

In effect, this allows Dumfries to act as a winger for much of the game, relieving him of defensive responsibilities and allowing him to focus on creative duties. This advanced role is the one that he gained prominence in at PSV, and later at Inter Milan where he replaced Achraf Hakimi.

His Man of the Match performance saw him score one and assist two against the US, but his value goes beyond the numbers. Often at hand to do a shift in defence when required, Dumfries is able to carry the ball into the final third, make use of space created for him when the forwards pin the opposition defence back, and also able to create space for the forwards with his marauding runs in behind the opposition defence. On many occasions, he is the most advanced Dutch player on the pitch, in the most dangerous positions, to cause problems despite not being the most technically sound.

Argentina will have to strategize for his threat down the right, and how they defend the Netherlands’ width in general, perhaps by asking Rodrigo De Paul and Alexis Mac Allister to put a shift in to shore up the wide areas, or even matching the Dutch back five. Coach Lionel Scaloni is not one to tinker with his defence too often though, which could lead to a few interesting matchups.

If they fail, Louis van Gaal might be planting yet another fat kiss on Dumfries’s cheeks at end of the game, as he has done twice already this tournament. “ I gave him a big fat kiss,” Van Gaal had said. “I am going to give him another big fat kiss so everybody can see.”