The broader crypto market malaise is partly to blame for price drops, according to researchers who said the flighty assets were wilting as investors shunned risk. 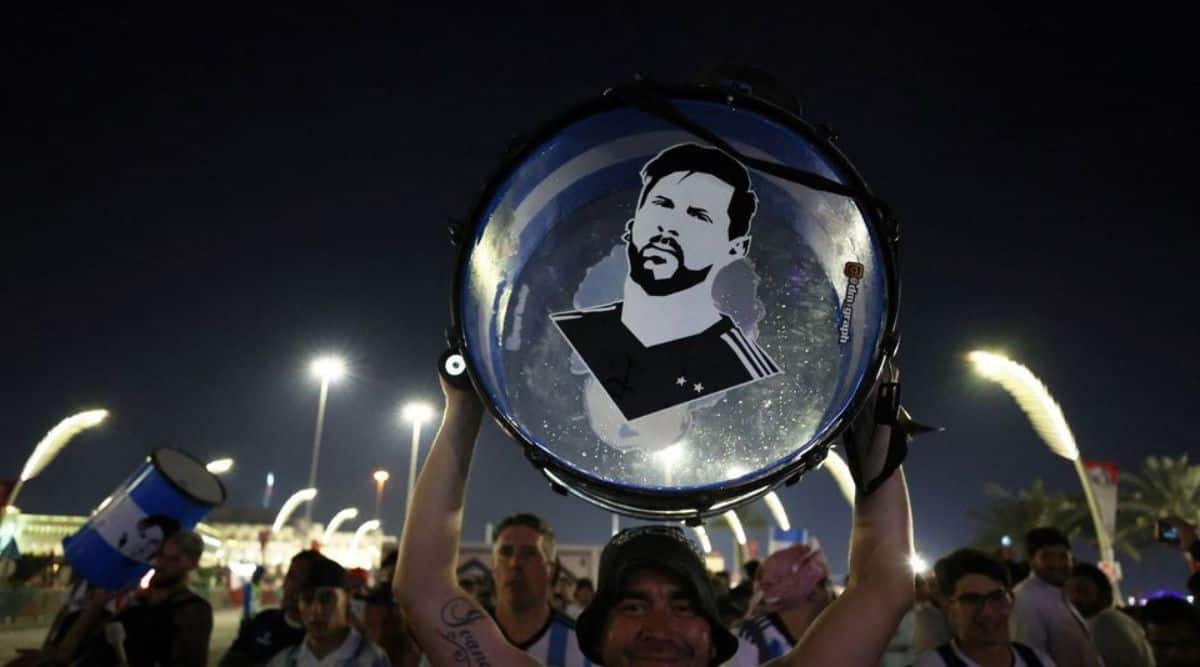 An Argentina fan holds up his drum with an image of Lionel Messi on it on the Doha Corniche . (REUTERS)

The market for fan tokens, a volatile cocktail of crypto and sport, is heating up in the desert of Qatar. Interest in this niche breed of cryptocurrencies, typically linked to sports teams like Barcelona or Brazil, has been charged up by the soccer World Cup which began on Nov. 20.

Average daily trading volumes for these tokens have risen to around $300 million in November from $32 million the month before, according to Kaiko, a Paris-based crypto data firm.

“So we have 10-fold increase in volume which is huge for these tokens,” said research analyst Dessislava Aubert.

For some buyers, these token offer the chance to engage with their side and gain perks such as the chance to win prizes and vote on songs played at matches. For others, the tradeable coins provide a new investment opportunity.

It’s a brave investor who’d seek to divine any sensible link between erratic coin prices and real-world events, though.

The token of Lionel Messi’s Argentina side slumped 25% to $5.26 following the team’s shock defeat by Saudi Arabia in their opening World Cup game. Yet it has dropped a further 22% since the team’s subsequent victory over Mexico brought fan relief.

The coin of Cristiano Ronaldo’s Portugal rallied 119% to $7 in the 10 days leading up to the tournament but then proceeded to lose almost half its value even though it was unbeaten and top of its group heading into its clash with Uruguay on Monday, which it won to reach the knock-out stage.

Similarly in club football, Arsenal’s token has fallen 12.5% since tokens art of the season to $1.68 despite their glittering run to the top of the English Premier League.

The broader crypto market malaise is partly to blame for price drops, according to researchers who said the flighty assets were wilting as investors shunned risk. The overall market cap for fan coins jumped to $401 million on the opening weekend of the World Cup, from $256 million about 10 days earlier, according to data from CoinGecko, but it has since fallen back below $300 million.

“The cherry on the cake is that it’s a tool, available on the blockchain that can be easily traded in the future, so there is a financial connotation attached to it,” he added.

“But the first perception should never be that you’re buying the fan token from a profit-generating standpoint.”

Socios, which is promoted by Messi, is the biggest player in this slice of the crypto industry. It facilitates trading of most fan coins, describing buying such tokens as joining a loyalty scheme with exclusive benefits and prizes.

Some of the world’s biggest football clubs have launched tokens supported by Socios including Paris Saint-Germain, Manchester City, Inter Milan and Atletico Madrid, as well as the Portuguese and Argentinian national teams, with market caps of tokens ranging from about $7 million to $21 million.

Trading volumes for the Socios-linked token Chilliz, which users buy in order to trade with their team tokens, hit a seven-month high in early November ahead of the World Cup but have since retreated 40% from that peak.

When looking at the breakdown of trading in the Chilliz token by fiat currency, the Korean won dominates with its total fiat volume exceeding 87% in early November followed by Turkey’s lira , according to data from Kaiko. The growth spurt in fan tokens comes at a time of tumult in the crypto market, which is reeling from the collapse of major exchange FTX earlier this month.

Bitcoin is brooding near two-year lows at around $16,245. While the FTX fiasco has raised serious questions about the lack of regulation in digital assets, fan coins – which some issuers say fall under the utility token category – remain a grey area.

“Tokens which do not offer sufficient utility could face some regulatory scrutiny, because this would infer that the token is an investment into the club,” said Marcus Sotiriou, analyst at digital asset broker GlobalBlock.

“However, if the token offers exclusive benefits and focuses on the utility it provides to its fans, then I do not think there will be regulatory issues.”

Socios said it believed in regulation to give fans trust and transparency. In August, Britain’s advertising watchdog upheld a ruling against Arsenal over two adverts about fan tokens posted on the club’s website and Facebook that it deemed were misleading and irresponsible, although the club denied this.

Markus Thielen, head of research at digital assets platform Matrixport, said interest in these tokens among soccer fans could be short-lived.

“Companies and teams that are selling those tokens must now offer more value at regular intervals, otherwise users will lose interest after the World Cup quite quickly,”