World Cup 2022 Highlights, Brazil vs South Korea: Brazil make it to the quarterfinals of the World Cup for the eighth straight time. 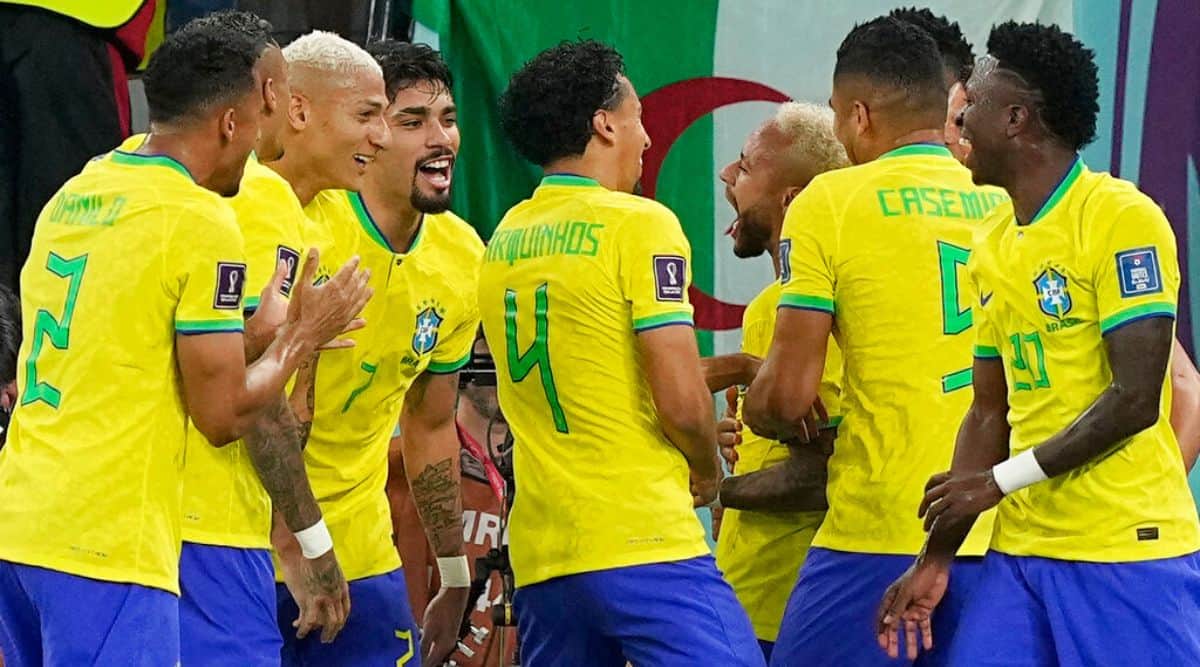 Brazil's Neymar, center right, celebrates after scoring his side's second goal from the penalty spot during the World Cup round of 16 soccer match between Brazil and South Korea, at the Stadium 974 in Doha, Qatar, Monday, Dec. 5, 2022. (AP Photo/Martin Meissner)

FIFA World Cup 2022 Brazil vs South Korea Highlights: Neymar scored a goal in his return from injury and Brazil beat South Korea 4-1 to advance to the quarterfinals of the World Cup on Monday. Neymar converted a first-half penalty for his 76th goal with Brazil and move one shy of Pelé all-time scoring record with the national team.

The 82-year-old Pelé said he was going to watch the match on television while hospitalized in Brazil to treat a respiratory infection. Vinícius Júnior, Richarlison and Lucas Paquetá also scored in the first half for Brazil, which made it to the quarterfinals of the World Cup for the eighth straight time.

South Korea was trying to advance past the round of 16 for the first time since its historic run as a co-host in 2002, when it made it to the semifinals and ended up fourth. Paik Seung-ho scored South Korea’s goal in the 76th minute.

And it's all over. Brazil are safely through to the next round without hiccups and will face Croatia next. That will be a mouthwatering clash.

4 mins are added and Korea are buzzing around the Brazil box, looking for a way through. It breaks down and Richarlison is off for the counter. Throw and Alves takes a shot from distance which harmlessly goes by the goalie.

What an acrobatic try from Alves. Martinelli lofts in a pass and Alves with acres of space and he tries for an spectacular half volley  which hits a Korean body and goes out.

Uff. Mistake by the Korean goalie. he played it straight to Rodrygo who was advancing on him. Richarlison was waiting in the middle but Rodrygo's cross is cut off by the goalkeeper.

Neymar is brought off and Rodrygo will take his place. There's a change in goalkeeper too as Weverton is brought in for Alisson. And in doing so, every member of the Brazil squad have taken the field in this World Cup.

Free kick for Korea and Son wil take it. He doesn't but that ball is kept out by Brazil. The ball falls to Paik who finsihes it with an elegant volley. Korea get one back!!!

Substitutions for Brazil now as Danilo and Vinicius junior are withdrawn. Gabriel Martinelli and Gleison Bremer are in to replace them.

Korea are having a bit of the ball now. They are putting low fizzing crosses through but they are dealt with by a resolute Brazil. A change of approach is much needed.

Another move breaks down as Raphinha gets the ball in an advantageous position and shoots straight at the goalkeeper. Change for Brazil as Militao goes off and Dani Alves comes on.

58': Korea tries to break BRA down

Korea with the ball now and they have put in some balls in the box but some Brazil player is always there to stop the attack getting dangerous. Korea will build again afater being thwarted.

Free kick for Brazil in a good position as Neymar is bundled over. Casemiro, Neymar and Raphinha are standing over the ball. And Raphinha shoots and it hits the wall and goes behind for a corner.

And that's back to back shots from Brazil. Raphinha snbakes away from the Korean defenders, gets a bit of room and places a low shot which is saved by the goalie. Vinicius gets the ball back and shoots wide.

Brazil are hovering around the Korean box now, playing a string of passes frm one side to another. Loose from Vinicius and it sets Korea off but Brazil take it back and start their own counter. Ultimately Raphinha's attempted cross is off him for a goal kick.

And the first salvo of the 2nd half goes to Korea as Son runs behind Marquinhos and shoots which is saved by Alisson for a corner. Nothing off it though.

Brazil kicks us off in the 2nd half. Will it be more of the same from them or will Korea find an avenue back into the game. Stay tuned and watch.

Watch: Tite joins in the dance

And the referee blows the whistle for half time. It's all sunny for Brazil while Korea sink deeper into the mire with no way back in sight as we head to the break.

⏸ @CBF_Futebol leads at the break with @neymarjr helping out with a goal! ⚽️

Aaand that's another miss. Richarlison with a sea of space in front of him. Glides towrads the Korean goal and shoots. The goalie saves with his feet and it falls to Neymar who shoots wide.

5 minutes have been added and Neymar tries to dance his way through a Korean defence. And that was one step too many as Korea clears.

Even with a returning Neymar, Brazil face stern test against South Korean wing-crashers

Neymar kicks the ball among three Serbian players during the World Cup match between Brazil and Serbia. (AP photo)

Ahead of this World Cup, South Korea had been labelled the ‘Son Heung-min team’. Their chances this year, as a side that is not quite close to the 2002 team that reached the semifinal as co-hosts, largely hinged on their talisman, who suffered an eye socket injury and faced a race against time to be fit for the first match.

Son played despite being in recovery mode and not at his best, but his side played solid football, well-structured in defence with plenty of patterns of play to create attacks. They were arguably the best team of their group, which contained Portugal, Uruguay, and Ghana, but still needed a last-minute winner and results elsewhere to go their way to seal their place in the knockout phase.

The reward for that determination and resolve: a meeting with the tournament favourites Brazil. And as if the tie needed to be tipped any further in the Selecao’s favour, head coach Tite has confirmed star-man Neymar Jr. will return for the game after recovering from an ankle injury. (READ MORE)