Even with a returning Neymar, Brazil face stern test against South Korean wing-crashers

The Selecao have their superstar forward back, to play some part, but South Korea have proven they are no pushovers. 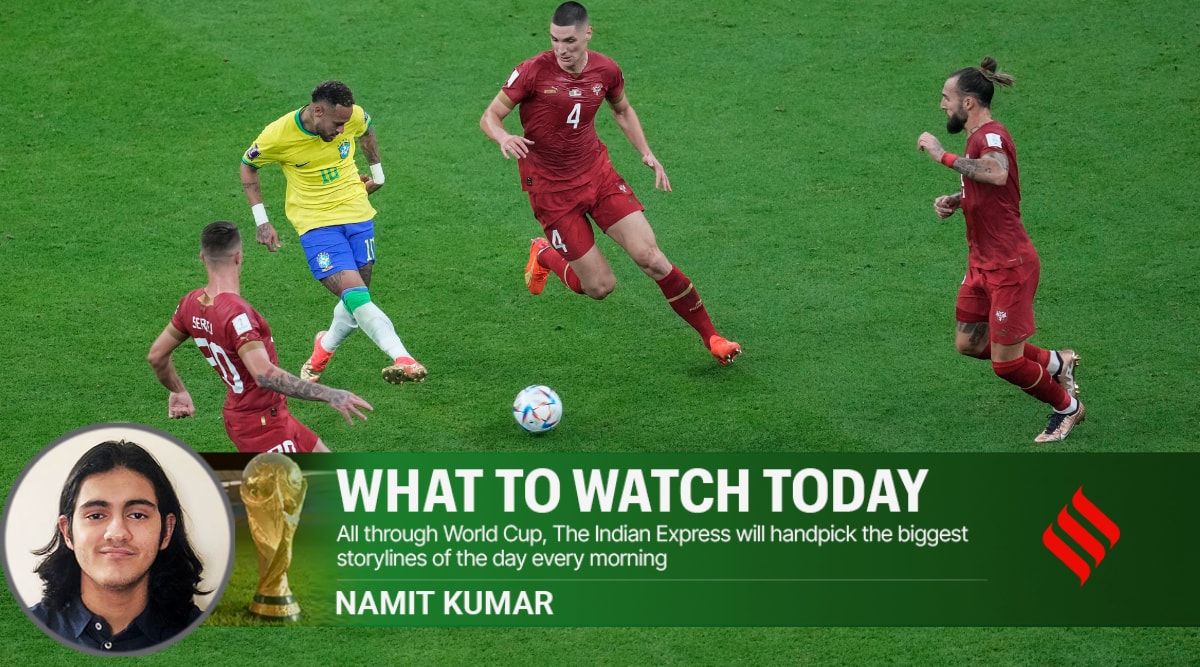 Neymar kicks the ball among three Serbian players during the World Cup match between Brazil and Serbia. (AP photo)

Ahead of this World Cup, South Korea had been labelled the ‘Son Heung-min team’. Their chances this year, as a side that is not quite close to the 2002 team that reached the semifinal as co-hosts, largely hinged on their talisman, who suffered an eye socket injury and faced a race against time to be fit for the first match.

Son played despite being in recovery mode and not at his best, but his side played solid football, well-structured in defence with plenty of patterns of play to create attacks. They were arguably the best team of their group, which contained Portugal, Uruguay, and Ghana, but still needed a last-minute winner and results elsewhere to go their way to seal their place in the knockout phase.

The reward for that determination and resolve: a meeting with the tournament favourites Brazil. And as if the tie needed to be tipped any further in the Selecao’s favour, head coach Tite has confirmed star-man Neymar Jr. will return for the game after recovering from an ankle injury.

Tite’s side is blessed with an array of attacking talent, making it one of the best squads at the tournament, but in the last two games without their talisman, they have been unconvincing going forward. There were murmurs that Brazil are better off without Neymar, but even the biggest critics of the Paris Saint-Germain forward would confess that the side have been flat without him, an acknowledgement of how dependent Tite’s system is on his creative spark, chance creation, and on-ball ability.

READ |Can Brazil win the World Cup without Neymar?

In a friendly the two teams played back in June, coach Paulo Bento had South Korea set up in a more open, attacking system – one they are used to playing in Asia where they are usually the better team – and got humiliated 5-1. This time around, the Portuguese manager can be expected to employ a much more conservative approach – combative in midfield, structured in a five-man defence, and reliant on the counterattack.

South Korea’s approach will test two key areas of doubt for Brazil. The first will be the attacking balance of the team to be able to create against a defence that affords very little space in between the lines and presses with intensity. Neymar’s return is a huge bonus for the Selecao, but how much of a role he can play, and for how long, remains to be seen.

Against Serbia, Brazil did not get a breakthrough until the hour mark, and even then Neymar was their brightest spark. Against Switzerland, without him, they looked lacklustre in attack, and needed a wonder strike from Casemiro to win 1-0.

The challenge here will be to find the right balance between their wingers and attacking midfielders – whether or not to try to get Lucas Paqueta to play Neymar’s No. 10 role or play with three out-and-out forwards that like to get in behind the defence in front of striker Richarlison.

The second test will be defending wide areas. South Korea’s most potent attacking – in this case probably counterattacking – strategy has been to advance down the wings with pace and energy, get the technically gifted Son to come narrow, and overload wide areas to launch balls into the box.

Against Ghana, in what was arguably the best 20-minute phase of the tournament when they were looking for the equaliser in the second half, South Korea completed more crosses than any other team in a single game in World Cup history.

South Korea fired in 35 open play crosses in the game against Ghana.

15 of those crosses found a team-mate, which has never been bettered in a #FIFAWorldCup match in recorded history (since 1966). pic.twitter.com/GnQaJdf4mv

Their ability to create triangles around the wide defenders to open up space for the cross will be a big test for Brazil’s wide defenders – likely to be Alex Sandro on the left and Danilo on the right, where centre back Eder Militao can also deputise – who could be the biggest weakness of Tite’s side.

So, despite the return of their superstar, and an easier-than-anticipated knockout fixture in terms of their opponents’ ranking, Brazil cannot afford complacency. In some ways, this could be the sternest test of their World Cup-winning credentials.

Can Japan’s momentum take them through to the last 8?

Meanwhile, Japan’s national team will carry their remarkable momentum – beating both Germany and Japan to top the ‘group of death’ this year – into a difficult test against the talented and experienced Croatian team.

Much of Croatia’s nucleus is made up of the same players that took them through to the final of the 2018 World Cup, including last edition’s Player of The Tournament Luka Modric. Modric remains the X-factor, but their engine-like midfield which also contains Mateo Kovacic and Marcelo Brozovic, runs the show.

Japan are likely to follow the same blueprint they have followed for the rest of this tournament, staying patient in their structures 5-2-3, not keen on holding much of the ball, and waiting for the right moment to hit on the counterattack.

In that case, Josko Gvardiol, Croatia’s standout performer at the World Cup and one of the most promising defenders in Europe, will play a crucial role in both being switched on in the last line of defence, and progressing the ball as his side builds up from the back.

Can Japan’s strategy and clever substitutions pummel another European powerhouse?