FIFA World Cup 2022 Quarter Final Highlights: Brazil bow out in the quarterfinals for the second time in a row. 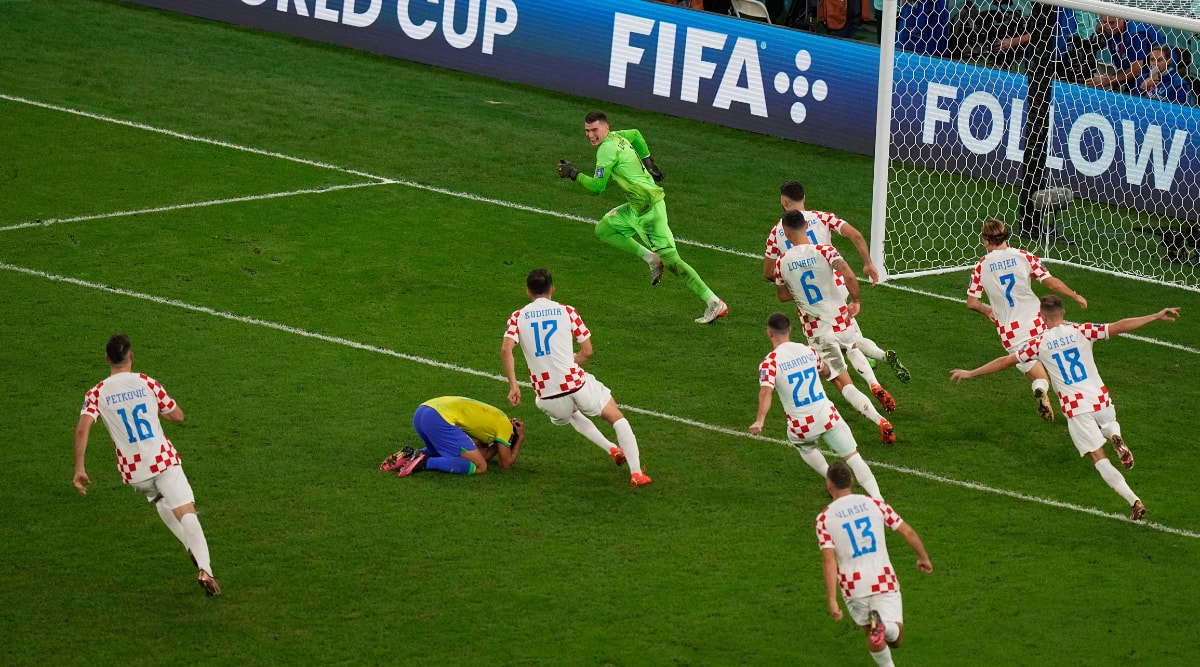 Brazil vs Croatia Live, World Cup 2022 Quarter Final: Croatia defeated Brazil 4-2 on penalties in the quarter-finals of the World Cup on Friday. Croatia were resilient in the 90 minutes, keeping Brazil out of their goal until a moment of magic from Neymar put them ahead. In the dying moments of extra time, a defected strike from Bruno Petkovic took the game to penalties.

Each of Croatia’s four penalty takers – Nikola Vlasic, Mislav Orsic, Lovro Majer, and Luka Modric – found the net but the same couldn’t be said for Brazil. Rodrygo’s opening penalty was saved by Dominik Livakovic, who had an standout performance through the game, and Marquinhos hit the post to knock out the Brazil team that were largely considered pre-tournament favourites.

What a game. What a result. Tournament football is brutal, and Brazil have encountered that fact with all its might.

Croatia deserve massive credit for their game plan, playing right out of the hands of the individually talented Brazilians, using the technical ability of their midfielders to keep a lot of slow possession, not allowing Brazil time and enough of the ball to create enough chances. So proficient was their ability to move the ball in midfield that Brazil were, at times, frightened of pressing them too intensely, in case space opens up in behind them.

Dominik Livakovic was show-stopping in goal, Josko Gvardiol was impressively composed and solid in defence, and Luka Modric was terrific in midfield.

Croatia's strategy was effective, but not enough to keep out a moment of genius from Neymar. Ultimately, Brazil conceded a soft goal, and failed to manage the game in the dying moments. Croatia's fighting spirit went on a bit longer, and they stole the win at the end.

Another incredible World Cup result in a tournament full of them.

Brazil are left stunned. What a performance from Croatia. Resilient through and through.

Marquinhos misses! CROATIA ARE THROUGH!

Steps up and hits the post. Jubilation for Croatia. Heartbreak for Brazil. Unbelievable scenes.

Emphatic into the bottom corner. Side netting.

Modric slots it in

Right down the middle again.

Livakovic has more heroics left in him. Guesses right and stops it

Smashes it down the middle.

Where was Brazil's midfield?

Time and again this edition of the World Cup has punished teams for not keeping their midfield line close to their defensive line. It has meant that cutbacks become the best currency for teams to open up their opposition and score goals. We've seen the Dutch do it against USA, and now Croatia make their comeback into this game through that tried and tested route.

Croatia's goal came in the 117th minute of this match. It came from a quick break that was borne out of Brazil's midfield going on a needless adventure out of their half. The result, a four vs four situation in their final third, a cutback from Orsic and a left-footed drive from Petkovic that touches Marquinhos but breaches Allison's net.

Dominik Livakovic has been in the thick of the action today. When he was Croatia’s hero after saving the penalties against Japan, he called up his mother.

"He only called me 'mom' and started crying and laughing,” his mother told Sata 24.

It’s been some journey. During qualification for the world cup, before a game against Russia, Luka Modric pulled  him aside for some frank chat.

“I wouldn't be telling you that if I didn't care, I love you boy, that's why I'm telling you. But I don't see your progress in the national team! Maybe the pressure bothers you?  What does it matter if you make a mistake, because everyone makes mistakes, why shouldn't you? But my feeling is that you are afraid to make a mistake - Luka told him before the aforementioned match,” Livakovic would later tell Sata 24.

“I wouldn't have come here if I was afraid of making a mistake,” Livi says he told Modric.  “You're a goalkeeper, do you know that?” Modric would hug him.

“Luka is a real captain. Everyone has ups and downs in their career, it was a bit difficult for me at that moment, but when you talk like that with the captain, when he gives you support, then it's certainly easier,” Livakovic said.

Fast forward to the game against Japan, to the moment just after the shootouts. Modric would clasp Livakovic and kiss him on the forehead.

Livakovic will be relied on for more heroics ahead of the penalties.

Antony went down on the right wing and win a free kick. Neymar took a brilliant free kick and the follow up is dealt with from some more heroics by Livakovic. 11 saves from him.

And that's that. We're going to penalties.

This is drama you simply cannot script.

Orsic latches onto the ball in space down the left wing and cuts it back for Petkovic, whose shot catches a huge deflection off Marquinhos goes past Alisson in goal.

The momentum, ahead of penalties, has swung Croatia's way.

WHAT A GOAL! WHAT A MOMENT FOR CROATIA AND PETKOVIC!

With the ball in the corner flag, Brazil keep some valuable possession in opposition territory and then win a foul.

Running the clock down.

Croatia's defence is breached. And who else but Neymar, who had been viewing Pele's goalscoring record and has just drawn level to it with 77 international strikes.

A series of one-two passes is the story of that goal – the last of which Neymar pulls off with Paqueta, who sets his teammate up with the ball in the box. At this point, Neymar, who gets fouled more than most players, is barged into by a Croatian defender. But he stays up, stays on, rounds Livakovic's heroic watch, and then rifles the ball into the net.

Croatia had been holding steadfast onto the belief that they could stop Brazil from scoring. But they simply couldn't account for one of its greatest-ever goalscorer.

Excellent ball in from Perisic down the right, and Petkovic tries to get at the end of it with a high leap but can't meet it.

Moments later, both him and Modric - their best players with the ball at their feet - combine to get a corner.

107': Croatia looking for a moment of their own

They'll need a similar moment of inspiration to get back into the game. The greatest test of what they are made of now, after a brilliantly resilient performance.

Brazil vs Croatia: Where the battle will be won

The quality of players in the middle of the park for this tie is incredible. Croatia have Modric, Brozovic and Kovacic – the trio central to everything they do on the field. Brazil, meanwhile, boast the likes of Neymar, Pacqueta and Casemiro. But here’s where the similarities end.

While Brazil’s midfield – in fact, their attackers overall – are young and pacy, Croatia’s ageing midfield comes into this match on the back of a tiring Round-of-16 encounter that went to penalties. While Modric, Brozovic and Kovacic control all play, they are also prone to leave vast spaces in the middle, which Brazil could easily exploit.

Brazil, because of their sheer quality, are also set to create more chances. So, it really comes down to whether the experienced Croatian midfield can keep a tight shape and smother the Brazilian machine so as to stop them from playing free-flowing football. On the other hand, if Brazil manage to isolate Croatia’s midfield, that’ll be battle half-won for them. (READ MORE)