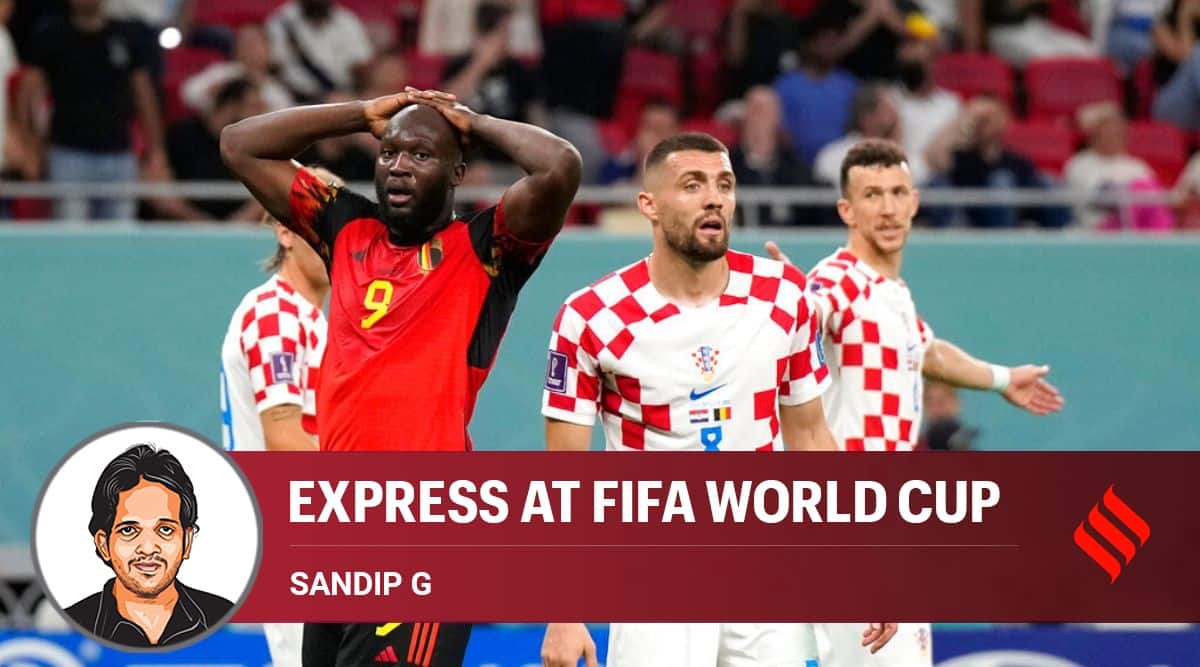 Emotions poured out when the final whistle blew at the Ahmed Bin Ali Stadium. The judgment was pronounced — Croatia would sneak through to the last 16 while Belgium would crash out as the match ended in a goalless but vibrant draw. Luka Modric tumbled to the ground and lifted himself to walk around the ground to thank the Croatian supporters. His knackered friends lay sprawled on the ground, with not a sweat more to shed.

He walked towards the half-line, where Romelu Lukaku sat cross-legged in tears, head caved between his knees. He extended his right-hand for support and consolation. Tears still flowed uncontrollably from Lukaku. He had spilled a raft of glorious chances to put his team in front. There was no redemption in sight—the what-ifs would haunt him forever. He pulled the shirt over his head, so that he escapes from thousand sympathetic glares from the stands. Not far from him, lay Kevin De Bruyne, impassively looking up at the skies. In the dug-out, manager Roberto Martinez looked blankly into the distance before he began to commiserate with his players, most of them in tears.

Unmistakable was a sense that Belgium’s golden era has passed. Martinez denied—“No, no. You’ve got players like Tielemans, Doku, Onana”— but the overwhelming feeling of closure could not be suppressed. There were signs before, de Bruyne himself had downplayed the prospects of his team’s title-winning ambitions, there were signs again today, but when the moment of reality struck, Belgium could not handle it. On Thursday, they had given the game everything they could. They were frantic as they were desperate, but the sense of desperation could not mask the glaring disunity of Belgium, slow, age-ravaged bodies rebelling orders of the mind.

🇭🇷 @HNS_CFF are through to the Round of 16 once again!#FIFAWorldCup | #Qatar2022

The passing was slow, the supply was ponderous and creativity was stuck. On another level, their inertia would have been punished even before they had settled, they could have shipped in a goal before 60 seconds when Luka Modric slashed a lovely ball to Ivan Perisic who slalomed to the box but whistled the shot over. The defence looked rattled; the midfield perturbed, as Croatia stormed away at a vastly revamped eleven with Leandro Trossard functioning as a false nine and the 35-year-old Dries Mertens reinstalled just behind him, instead of Eden Hazard.

Mertens, like several of his colleagues, showed his age, and in his sunnier days would have captured a brace. First, he fizzed a sumptuous cross from Kevin de Bruyne, who galloped 50-odd yards and skipped through a maze of defenders to fish out a delectable cross, only for Mertens to spill. Belgium, in dire need of goals and points, could ill-afford to waste such gilt-edged chances. The second spill was horrific. The rumbunctious centre-back Leander Dendoncker barged into the byline, cut back and slid a pass for Mertens on the near post. A toe-pike, a slide or a stud was all it would have required for a goal. But he was slow to read the centre-back’s intentions, and slower to react. When he missed the opportunity and looked skywards in agony, he could hear the shots for Lukaku. Even if he had not heard the Lukaku chants, Martinez would have brought him on at half-time, which he did.

But it was not Mertens alone that should apportion the blame. Aside from the effervescent de Bruyne, and Yannick Carrasco (who though conceded a lazy penalty saved only by the falling front of Dejan Lovren’s arm that was in an off-side position) in bursts, they were largely immobile, reacting too slowly and reaching the ball even slower. The injection of Lukaku did liven up Belgium’s game, though he is not the most dynamic of strikers either.

But he provided what Trossard, who was shunted behind him and then dispatched to the bench, could not. Physicality and goal-threat. With Lukaku on the prowl, Lovren and Josko Gvardiol could not push upfield as freely as they would when Trossard and Mertens were trudging along.

After Belgium somehow weathered a storm at the start of the second half, when Thibault Courtois repelled a bestial strike from Mateo Kovacic and Marcelo Brozovic, Belgium settled down and spun a couple of glorious offerings for Lukaka. With the first he blasted the post, though he had a second more for better placement than he thought; the second he headed over the post. That was to become a recurring theme of the game, as Lukaku kept spilling opportunities to prolong the longevity of Belgium’s golden generation.

In the 90th minute, he was just five yards from an open goal but all he could do was to trickle the ball into the thankful palms of Dominik Livakovic. Three minutes before he just contrived to flick the ball wide from four yards. Inevitably lurked shades of tragedy in the multi-layered sunset skies over the Ahmed Bin Ali Stadium.

There, thus, were adequate signs for Belgium to kick in an overhaul, rather than clutching onto the fading sheen of their supposed golden generation, that was not as gold as it turned out to be. Rather, history would remember them as they remember most golden generations, the inheritors of unfulfilled renown. Perhaps, a burden would be lifted off their shoulders.

There’s perhaps no better team to learn from than Croatia. Unlike Martinez, his Croatia counterpart Zlatko Dalić restrained his sentiments in weeding out the ageing players of the side that emerged second in Russia. He rebuilt them with younger players but restored the still-blazing older players like Lovren and Luka Modric, who at 36 still was the most influential player on the pitch and was rightly adjudged man of the match. On the other hand, Martinez clung on to his trusted but wearying band, despite the option of blending young talents from Belgium. But now, finally and officially, the days of Belgium’s golden generation are over.

What is a wine bar, anyway?