Behind Morocco’s dream run at FIFA World Cup, is a secret weapon in the stands — players’ families

The families have bonded so much over the past three weeks that they are now like a big family itself. 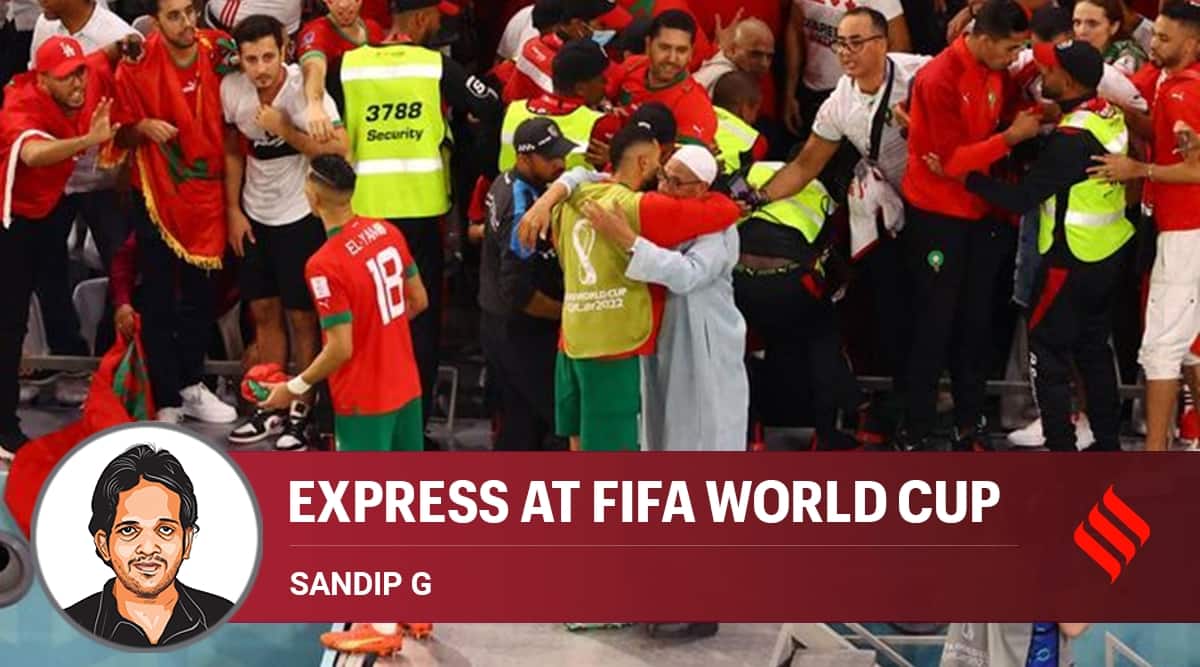 Fans celebrate with Moroccan players after the team qualified for the quarter-finals. (Reuters)

THERE’S THIS heartwarming viral clip from the World Cup. It has Morocco’s star-player Achraf Hakimi, after the win over Spain, tearing away to the enclosure where his mother is seated. He climbs over the barricade and hugs her, tears rolling down the eyes of both. She holds his face and kisses him on his forehead. Several Moroccan fans now have this emotional picture as their wallpaper — and a banner, written in Darija, the Moroccan Arabic, that reads: “You are our favourite son.”

Not just Hakimi, you could see several other teammates in the embrace of their parents. In fact, parents of most of the Moroccan players are in Doha to watch their children play, many capping long journeys of hardship and pain.

“My mother cleaned houses and my father was a street vendor. We come from a modest family that struggled to earn a living. Today, I fight every day for them,” Hakimi had said in 2018, the year he joined the German club Borussia Dortmund.

In Doha on Tuesday night, a few yards away from Hakimi was midfielder Abdelhamid Sabiri kissing his father, his mother capturing the moment. So were Yahya Jabrane, Zakaria Aboukhlal and Bilal el-Khannouss. As though it were a big family occasion.

It was coach Walid Regragui who persuaded the football federation to let the family members of footballers and support staff accompany them. Regragui’s mother, too, is here. “Based on our experience in 2018, along with our technical team, we chose the option to bring the families. Some players have kids, some would rather have their parents with them. We did a good job in that regard. The spirit of family off the pitch, we want to bring that onto the pitch, and until now it’s functioning very well,” the coach said.

Though not the richest federation in the world, Moroccan football officials decided to meet all the expenses, including accommodation at the same hotel as the players are staying.

Regragui, however, was aware of the backlash if they crashed out early. “When you win, there’s no negatives, everyone is happy, but if you lose they will say — ‘Why did you bring the families?’ That was a dilemma a lot of them told me,” he said.

But now that they are in the World Cup quarterfinals for the first time in their history, the coach’s move has turned out to be a masterstroke.

After the Spain match, which Morocco won on penalties, an emotional Regragui said, “For us, they (the parents) are everything, the reason we are here. Whether we win or lose, we want them to be here and be proud of what they have achieved. They are our strength and the reason we are here. Our success is impossible without our parents’ happiness,” he said.

Regragui’s mother Fathima has never seen him play a game, or accompanied him anywhere in his travels as a coach. But when he asked her to join him in Doha, she could not resist. “We have been settled in France for 50-55 years, and apart from club games in the neighbourhood, I have never watched Walid play. I was at first reluctant to leave home, but he persuaded me and told me that I was his strength. So I thought I would go with him. And every time I see him, I get emotional,” Fathima told Al Ayam, a Moroccan daily.

Before every game, she would meet and bless him. Before the game against Canada, she sent him a simple but touching message: “Whether you lose or win, I am proud of you, my son.” Her only bother, says Al Ayam journalist Amir Badr, is that she is getting too many phone calls from relatives, acquaintances and journalists.

“She and Sadia (Hakimi’s mother) have become the most famous mothers in Morocco. Everyone is proud of them and everyone wants to convey their wishes to them. Everyone wants a picture with them in the stands. Everyone recognises them outside the stadium, everyone is inviting them to their house,” he said.

Fathima had migrated to Corbeil-Essonnes, about 30 km from Paris, even before Regragui was born. Hakimi’s mother emigrated to Spain when she was in her teens and had migrated to Madrid at the peak of the Moroccan migration in the 1980s. She did odd jobs like cleaning houses and streets for livelihood while his father was a street vendor. “They gave up their lives for me. They took many things away from my siblings in order for me to succeed. Today, I play for them,” he had posted on Instagram.

The families have bonded so much over the past three weeks that they are now like a big family itself. “They are staying in different parts of the world, have never met each other, from different backgrounds but now they are all like a family, wishing and praying for each other’s success, dining out together, spending time together,” says Badr, the journalist.

They comprise a mini fan-group themselves, and are joined by thousands of Moroccans settled in Qatar and nearly 50,000 who have flown from Morocco and parts of Europe, Africa and the Middle East to support on match-days.

This scarlet wall of support — mother, father, family and a country that has become one big family — has now inspired the coach to dream of what was unthinkable till a few weeks ago, winning the World Cup. “We believe we can do anything as a team,” Regragui said.

Storyteller cracks 7-yr-old UP case: ‘Murdered’ girl is mother of 2, accused in jail