Apart from an anomalous defeat at the hands of Jamshedpur, ATK Mohun Bagan have looked near-invincible this season owing to their air-tight defence and an unerring Roy Krishna upfront.

After four weeks of a season like no other, the Indian Super League (ISL) has started forming its own title narrative inside the bio-bubble in Goa. ATK Mohun Bagan (ATKMB), playing their first season since the merger, have already shown that they are the team to beat this season.

Since the season opener in November, Antonio Lopez Habas’ side have eked out industrious wins left, right, and centre. Apart from an anomalous 2-1 defeat at the hands of Jamshedpur, ATK Mohun Bagan have looked near-invincible owing to their air-tight defensive system and an unerring Roy Krishna upfront.

During his time at the Kolkata-based club, Habas has forged his own brand of football — effective if not entertaining. The Mariners hardly ever start matches on the front foot, mounting pressure with a possession-based style. Instead, they sit back comfortably in their own half and wait for the perfect moment to exploit gaps in the opposition’s defence with well-coordinated counter-attacks.

But ATK Mohun Bagan aren’t strictly one-dimensional in their approach.

Although they added Bengaluru to their growing list of “1-0 casualties” on Monday with the help of a David Williams first-half stunner, the Fatorda Stadium witnessed a counter-pressing spectacle from the newly formed club. ATKMB hounded every Bengaluru player all over the pitch proactively, winning most of the duels, and even started attacking sequences when they were leading the match.

“We had to respect Bengaluru because they are a very difficult team to counter against. They are very dangerous from set-pieces. I think my team’s performance was perfect,” Habas said at the post-match press conference.

Knowing how dangerous Carles Cuadrat’s side can be from open play, with their league-high seven goals, Habas set up his team differently to make them taste their own medicine. ATKMB took the game to the Blues from the off with an attacking 3-4-3 formation which had midfield controller Edu Garcia pulling the strings from deep. If Manvir Singh had been a bit more clinical inside the box, the contest could have had two more goals. 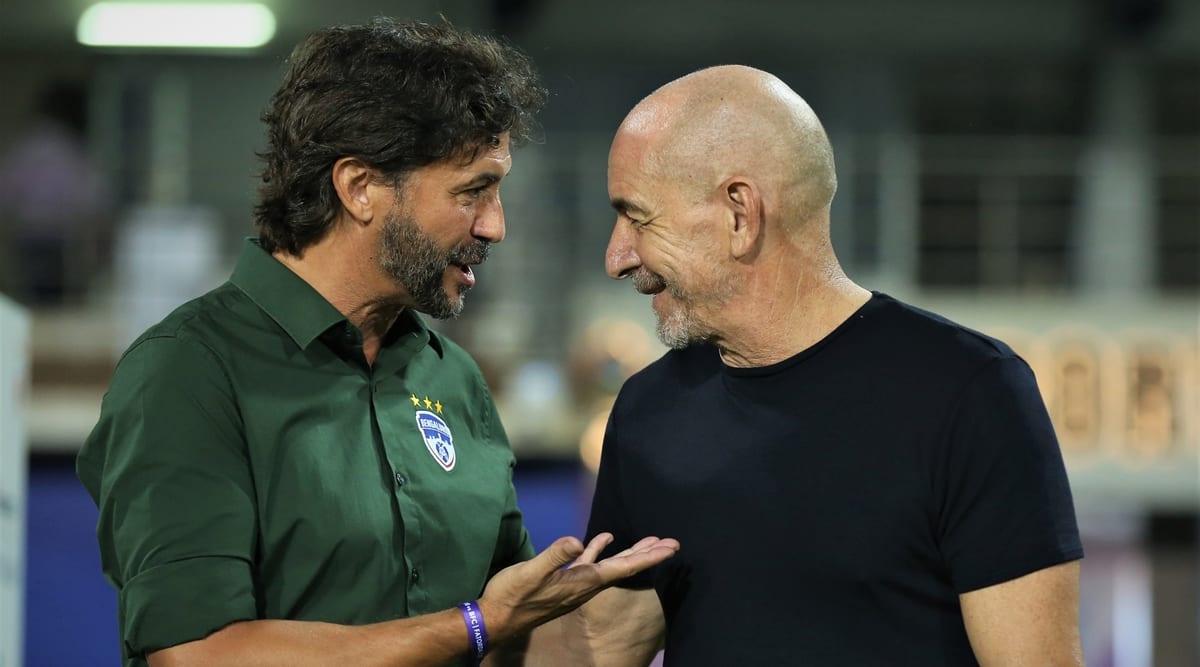 Carles Cuadrat’s BFC were unbeaten before their meeting with Antonio Habas’ ATKMB. (ISL)

Although ATKMB are behind title favourites Mumbai City and even Bengaluru according to the numbers, their character and versatility give them an upper hand. Yes, Habas’ side is tenth in terms of passing (2060 passes), eighth in terms of crossing (70 crosses), and sixth in terms of shooting (78 shots), but trophies aren’t won on statistics or even aesthetics.

The Mariners’ style might not be as dynamic as Mumbai City or as pretty as Goa, but they get the job done. Be it grinding a result and grabbing a late winner, or changing the gear to attack the opposition right from the first whistle, ATKMB’s tactical adaptability certainly makes them difficult to unnerve. Adding to this, the team has unmatched defensive nous. With a league-high five clean sheets from seven matches and 263 successful tackles, 34 more than any other team, it’s evident how adept the five-man backline of ATKMB is.

Talking about Habas and his well-drilled ATKMB side, former Kerala Blasters head coach Eelco Schattorie had earlier said, “I always compare Antonio Lopez Habas with Jose Mourinho for his defensive tactics. It’s not difficult to figure out what he is doing, but how to stop it? That is a different story.”

From the way the season has unfolded, it’s fair to state that the “different story” is still quite unknown to the other managers, barring Jamshedpur’s Owen Coyle, in the competition. ATKMB’s next three opponent head coaches — Csaba László, Gerard Nus, and Sergio Lobera — will surely have a lot to think about during the festive season.

If the former two fail to stop the Mariners in their tracks, then the January 11 meeting between the Green and Maroon and Lobera’s high-flying Islanders automatically becomes a title-deciding encounter. Then, the answer to the paradoxical age-old question — “What happens when an unstoppable force meets an immovable object?” — might finally be revealed.