Argentina vs Mexico: Enzo thrives in Messi’s shadow with a wonder goal

If Lionel Messi’s goal released a pressure cooker of tension that had slowly simmered itself up to tipping point at the 80,000-seater stadium, Fernandes’ strike calmed the Argentines down. 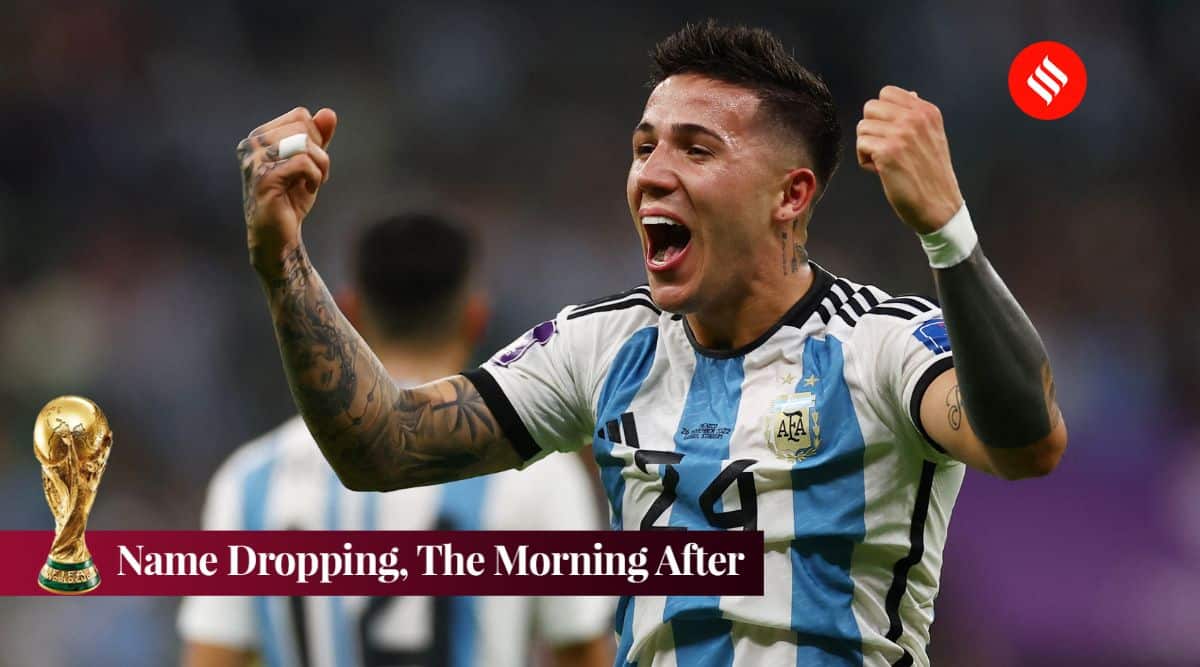 Enzo Fernandes has been coached by Hernan Crespo at Defensa y Justicia, was given the iconic No 13 jersey of Eusebio at Benfica and last night scored the second goal for Argentina in their 2-0 win over Mexico at the Lusail Stadium – all while being 21 years old.

If Lionel Messi’s goal released a pressure cooker of tension that had slowly simmered itself up to tipping point at the 80,000-seater stadium, Fernandes’ strike calmed the Argentines down. At a goal up, the Mexicans were dangerous, but the situation they were in, even more so. A defeat would mean Argentina would join hosts Qatar in making an early, early exit from the tournament. A draw would leave them at the mercy of others. A win would have to be conjured – the magician at hand had already done his bit.

And then came a corner in the 86th minute – a short pass to Messi from Rodrigo de Paul. Who then passed to Fernandes. Fernandes’ first touch directly brought him into a conflict zone with two of Mexico’s box border police. His next move elicited a squeal of surprise and then a roar of delight from commentator Peter Drury. “Oh, sweet feint… wonderful goal!”

Read |After beating Mexico, what does Messi’s Argentina need to do to progress in the World Cup

That was how quick it happened. Fernandes ran into Erick Gutierrez – who stood directly in front of the Argentine midfielder and the goal. Gutierrez then got shifted to his right and away from goal in the slickest of shoulder drops a footballer could summon on a pitch. Defender unceremoniously shunted out of the way, Fernandes curled a shot into Guillermo Ochoa’s right. Before Gutierrez or Ochoa could even realise that their hopes of a comeback were swindled away, the Benfica midfielder was already kissing his badge and being mobbed by Messi in front of a swathe of screaming Argentines. It was over.

Fernandes’ influence on the game, though, started a lot earlier. A toothless Argentine midfield, led in chief by De Paul, was unable to string together a consistent period of pressure on the Mexicans – pressure that can only be borne through a passing clinic that began when Fernandes was substituted in, in the second half.

This was only his fifth appearance for Argentina but his impact was felt immediately. Argentina for the first time in this tournament, gained in the midfield department. They had a player who could circle the ball across the pitch, understood the perils of being wasteful with it and consistently created pressure on the Mexicans with his delivery of the ball. Why would they relegate this player to the bench?

Not knowing about the talent of Fernandes has been a facet that has followed his young career. After 13 years at the River Plate youth system, he broke into the senior team but was quickly shipped out on loan to Defensa y Justicia. It was over there that the legendary Crespo gave him match after match – and that faith culminated in the team winning the Copa Sudamericana in the 2020 season.

“When Marcelo (Gallardo, River Plate coach) told me about Defensa, I took it well because it was a chance to show myself, get some games, compete against first-rate players,” Fernandez told Ole. “I was lucky to be coached by two great trainers like Crespo and Sebastian Beccacece, share a squad with huge players and even better people and pick up two titles which will go down in history.

River Plate then immediately called Fernandez back. At the start of the 2022 season, Fernandes was on form, scoring eight goals and making six assists in 19 appearances – a feat that caught the eye of European scouts. A few months later Benfica managed to win the race to sign the midfielder, giving him the prized jersey of Portuguese attacker Eusebio. And since joining the team, they’ve played 13 league games, won twelve of them and are yet to lose.

He ranks in the 99th percentile for passes attempted and makes close to 10 progressive passes per game – all the while averaging 2.5 tackles a game. The statistics prove what the eyes see – Fernandez can be a combative midfielder who has excellent passing skills, especially in the third phase.

At this World Cup, finding the right midfield combination for the South Americans was the key. While Lionel Scaloni is still some ways away from that possibility, that second-half midfield performance from his team, especially the Gundogan-esque display from Fernandez in the middle of the Lusail Stadium, is starting to put some more pieces of the Argentine puzzle in the right spot.