Andres Iniesta could make his J.League debut at the weekend when his new club Vissel Kobe host Shonan Bellmare, the Spaniard said after arriving in Japan on Wednesday. 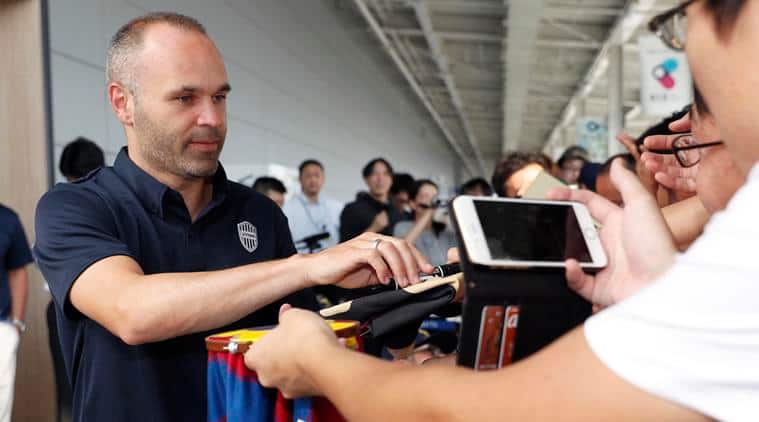 Spain’s Andres Iniesta signs autograph for a fan upon arrival at Kansai International Airport in Izumisano, western Japan on Wednesday. Iniesta is to play for the J-League’s Vissel Kobe soccer club. Iniesta signed with Kobe in May. (Source: AP)

Andres Iniesta could make his J.League debut at the weekend when his new club Vissel Kobe host Shonan Bellmare, the Spaniard said after arriving in Japan on Wednesday.

The 34-year-old spent 16 years at Barcelona, where he won nine La Liga titles, four Champions League crowns and six King’s Cups, before signing for Kobe in May.

Kobe officials said Iniesta would join up with his new team mates for training on Friday before Sunday’s match, Kyodo news agency reported.

“It was a long trip but I had been looking forward to coming to Japan. I’m excited to play with my Vissel team mates,” Kyodo quoted Iniesta as saying after his arrival at Kansai airport, where he was greeted by 300 fans.

“I want to play as soon as possible. I’ll get in top condition for Sunday, and I hope to show the fans great play.”
Iniesta will link up with former German international Lukas Podolski at Kobe and will wear his familiar number eight jersey.

He will try to help Kobe, currently sixth in the league after 15 games, win a first Japanese championship. The club’s highest finish was seventh in 2016.

Iniesta, who scored the winning goal in the 2010 World Cup final, called time on his international career after Spain’s surprise defeat to hosts Russia at the World Cup earlier this month.