A bicycle kick is a crown of inheritance: From Pele to Socrates, Ronaldo to Ronaldinho, Neymar, and now to Richarlison

Brazil's Richarlison's second goal was a stunning bicycle kick against Serbia, which will enter the list of great goals scored by those who have donned the famed canarinho. 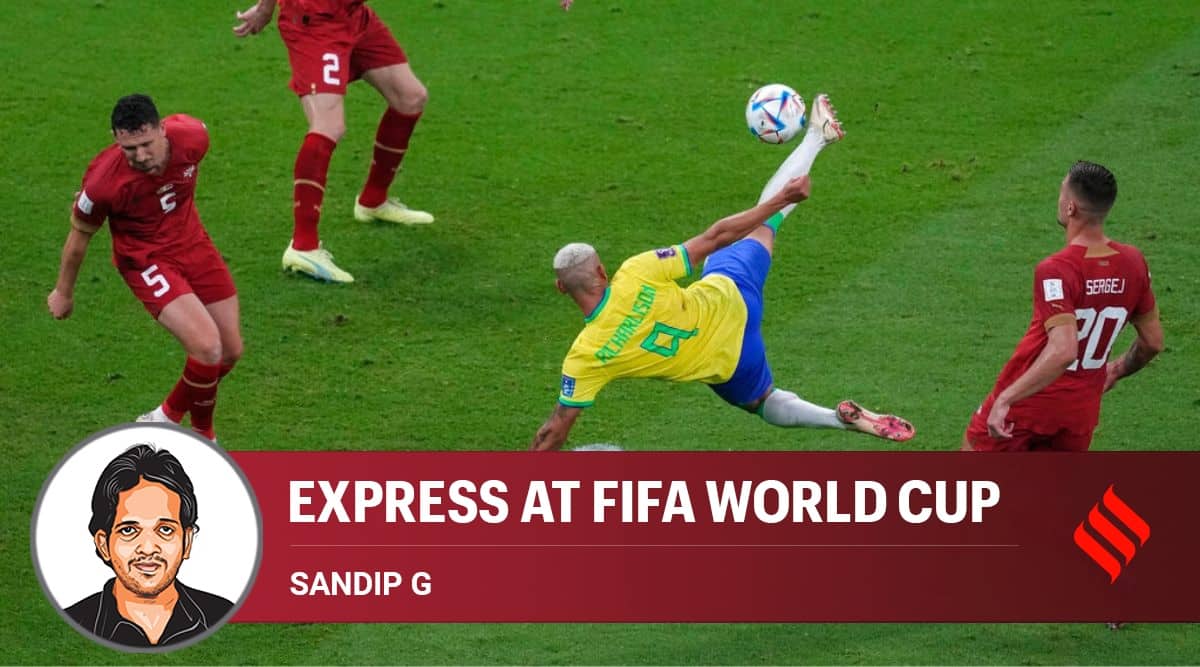 Brazil's Richarlison,second right, scores the second goal of his team against Serbia during the World Cup group G soccer match between Brazil and Serbia, at the the Lusail Stadium in Lusail, Qatar on Thursday, Nov. 24, 2022. (AP Photo/Darko Vojinovic)

The great Pele has a regret. That, for all the three World Cups he had won, for all the 1,283 goals he has stroked, for all the consensus that he is the greatest ever footballer to have walked on the planet, he has never scored a bicycle kick goal in a World Cup.

He regrets in his autobiography Pele: “I have just three-four of my 1,283 goals with a bicycle kick. It’s difficult, and my greatest regret is that I have never scored a bicycle kick goal in a World Cup.”

He has scored famous goals, artful ones, and spectacular ones in three World Cups, but the bicycle trick was not one of them. He mourns it like the great painter Rafael regretted that he could never produce the Mona Lisa of his contemporary Leonardo da Vinci. A bicycle kick goal is rare art, in that few manoeuvres in the game combine spontaneity and science, art and acrobatics, physicality and elasticity as much as the bicycle kick.

It’s like a bullet fired from the paint-brush of an artist, designed in the needle of a geometrician’s compass, requiring a dancer’s feet, a bullfighter’s physicality, a poet’s imagination and a gambler’s enterprise for the perfect execution.

The great forwards of the game feel a sense of imperfection and incompleteness, betrayal and shame of their own talent if they could not conjure the most outlandish of shots at some point in their career. When a sports gallery was opened in Rio in his honour, Pele gave the original photograph of his favourite goal, a bicycle kick goal he essayed against Belgium at the Maracana in 1965, famously known as the Bicicleta do Pelé, and in his words, “the most satisfying goal of my career.” Fifty years later, it was sold for one million USD.

One of his fitting inheritors, Zico describes a bicycle kick he scored in Japan as “the finest piece of play in my entire life.” In Brazil, it became an ultimate crown of inheritance, passed on from Pele to Socrates, Careca to Romario, Ronaldo to Ronaldinho (his last goal for Barcelona was an audacious scissor kick against Villarreal), Neymar, and now, to Richarlison. His second goal against Serbia was not just a thing of beauty, it was, in a nutshell, the soul and essence of Brazil that cannot be captured fully through a photograph, but rather through a series of split-second clicks.

Where do we start? From the stretched eyes of Richarlison judging the flight of Vinicius Junior’s looping pass from outside his boot (a magic trick in itself), getting into line with it, or the gentle snap of his left boot with which controls the ball, or the half air-borne right-leg uncoiling to unleash the shot, or the next frame when his legs are scissor-locked (the default frame), his body vertical to the ground, body swivelling in the air like a gymnast or the precise moment when the ball thuds off his right boot?

Richarlison! What have you done?! 🤯#FIFAWorldCup | @richarlison97 pic.twitter.com/kCKFdlINXq

Just a week on, the World Cup has beheld a raft of sumptuous goals. From Takumi Asano’s thunderbolt to Salem-el-Dawsari’s jink-and-blast, but this one surpasses all for the sheer unthinkability of all and the rarity of a perfectly-executed scissor kick.

According to footballstatistics.com, just one in 540 bicycle kick attempts results in a goal. It was also a goal that emerged during the skittishly beautiful football that Brazil revved up in the last 30 minutes of the game to marvel the 60,000-odd crowd at the majestic Lusail Stadium.

But the greatest bicycle-kick artist from Brazil was neither Pele or Ronaldinho but a man named Leonidas da Silva, nicknamed Magia Negra (the black magician).
The shot is not a Brazilian invention either but attributed to Chile as it’s called Chillena in Latin America. Ramon Unzaga, a Spanish-born Chilean footballer, is credited with creating it.

Da Silva wowed the French with the manoeuvre against Czechoslovakia in the 1938 football World Cup. The Paris Match described him thus: “The man is like a rubber band. On the ground or in the air, he has the devilish gift of being able to control the ball no matter where he happens to find himself on the pitch, and to fire a cracking shot just when you least expect it. When Leonidas scores, it’s like you’re dreaming.”

On his 100th birth anniversary — a decade after his death due to Alzheimer’s — google forked out a doodle in his remembrance. In times to come, so could Richarlison’s goal. Already, it is woven into Brazil’s football lore. It’s not a readily-accessible space, a lot of Brazilians have scored a lot of outrageous goals in the World Cup. Pele’s wonder strike against Sweden in 1958; Carlos Alberto screamer Italy in 1970; Ronaldinho’s floating beauty against England in 2002; Nelinho’s swerving beast against Italy in 1978. Richarlison’s goal would find a deserved place among them. A Golazo.

Those that saw Richarlison’s goal, or any bicycle kick, would say that it was like dreaming. And often such a shot not just lifts the teams, but uncorks the creativity among the colleagues. After the wonder strike, Brazil unpacked the sort of style and swagger that you associate with their vintage. The freedom, adventure, fun, the joy, in the last 20 minutes transported the crowd to a floating, magical fairyland, finally intruded by the referee’ cruel whistle. How they wish the game never ended!

Supreme Court confirms bail for Anand Teltumbde: A recap of the Elgar Parishad case, the accused