Esther Staubli is set to become the first female referee to officiate a match at the FIFA U-17 World Cup when Japan will take on New Caledonia. 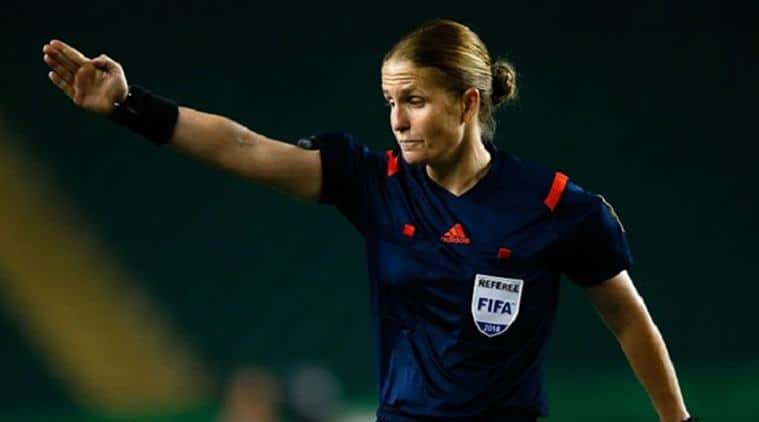 Esther Staubli is one of seven women referees invited to the tournament in India. (Source: FIFA.com)

Switzerland’s Esther Staubli is set to become the first female referee to officiate a match at the FIFA U-17 World Cup when Japan takes on New Caledonia in the final round group E match here on October 14.

This is in line with FIFA’s objective to further develop women’s football as the 38-year-old is one of seven women referees invited to the tournament in India where all the male and female match officials, nominated by FIFA’s Referees Committee, have completed a host of activities together in a series of seminars, including theoretical sessions in the classroom and practical sessions on the field of play.

The benefits of joining forces are mutual when men and women team up to hone their interpretation, positioning and decision-making abilities.

Another positive aspect is that the women referees have an opportunity to gain more experience.

High-level competition matches are often limited during the year in their respective regions and so such opportunities are crucial as the referees prepare for the FIFA Women’s World Cup in 2019.

“In having the opportunity to now work together with their male colleagues at the FIFA U-17 World Cup India 2017, FIFA’s female referees are one step further in their preparation and in their careers at the top level,” a release said.

That FIFA has selected female referees for a men’s tournament is a logical consequence of an education programme that FIFA’s Refereeing Department started in 2016.

The positive results and improvements seen in the joint preparations have shown that the time has come for elite female referees to officiate in men’s competitions together with their male colleagues.