Messi could not convert a penalty but Mac Allister and Alvarez ensured the team and their hero's dream was still alive. BTW: Mac Allister's father played with Maradona. 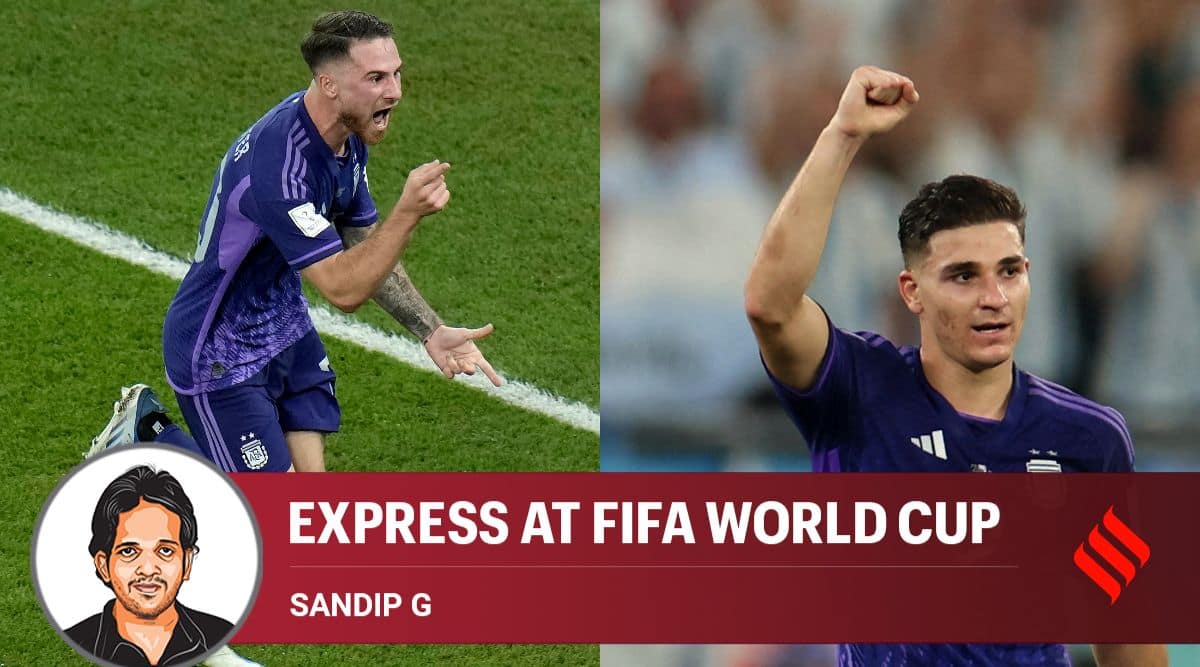 When Alexis Mac Allister saw the ball coming in his direction, his eyes glowed. Winking at him was the moment he could become his country’s hero, his idol Lionel Messi’s hero, perhaps even the latter’s redemption. He darted forward and struck the ball as hard as he could. The connection was feeble. Perhaps it was nerves, perhaps it was that his boot got caught in the turf.

But sometimes, destiny smiles at you. Had his connection been sweet, the Polish goalkeeper, Wojciech Szczesny, could have better judged the flight and leapt to palm the ball away. But Mac Allister scuffed it, and the ball rolled onto the far post and kissed it before trickling inside. The unfortunate Szczesny was horribly wrong-footed. Mac Allister’s eyes rolled in disbelief.

His eyes searched for Messi’s. Messi’s eyes searched for him too. Both ran towards each other and held themselves in an embrace. Messi thanked him for the goal that saved him from being consigned to a tragic-heroic abyss after the spot kick he had fluffed in the first half. Argentina needed a win against Poland to guarantee themselves a Round of 16 spot.

Mac Allister was thanking Messi for what he has done for him. Not just in the dressing room where Messi told his teammates to not call him “Colo”, because of his ginger hair that smacks of his Irish descent, but for the inspiration he has been to the Brighton playmaker for all his game-moulding years.

He was born into a footballing household — his father Carlos was a tough-tackling left-back who was Diego Maradona’s ally.

During his career, Carlos shared the pitch with Maradona while playing alongside the legendary forward at Boca Juniors and the Argentina national team (Carlos has three international caps). On Wednesday, Carlos was in the stands at Stadium 974 in Doha watching his son share the stage with one of the greats of this generation.

Read |In the first World Cup after Maradona’s death, his teammates and fans feel the void while celebrating his legacy in Doha

Mac Allister’s uncle and brothers, too, played professional football. But it was Messi that he always wanted to be. So Messi-struck that he was reluctant to wear the No10 shirt when he played for Argentina U-23. He wears the No 10 shirt for Brighton, though, and he is emotional about it: “The number 10 is important in Argentina and the world, so it’s nice to wear it.”

The first time he saw Messi, during a club game in Argentina, he was lost for words and thoughts. He says he stood like a statue. In his first training session with the senior team, he was so nervous that he just kept wandering here and there. “I was red, completely red. I didn’t even want to say hello. I was really nervous even to meet one of the best players in the world,” he told sports website The Athletic.

That was just before the 2020 Tokyo Olympic Games, and 24 months later, he scored the goal that went a long way in redeeming Messi. As a token of gratitude, Messi handed over the man of the match award, which was presented to him, to Mac Allister. He coyly, almost embarrassingly, accepted it with a smile that bared his emotion. “You owe me nothing, but I owe you for what I am,” he said, his face full of awe.

This emotion could be true for all the Argentine players in the Poland game. Messi had an unusual slip-up with the penalty kick, though otherwise he had one his best games of the tournament. But when Messi stuttered, the entire team sprung for atonement. An unuttered but loud statement that you have lifted us for so many years, and now it’s our turn to lift you in the moment of agony. A moment of reciprocation, a moment that symbolised how Messi’s teammates love him back.

Not just Mac Allister, but the entire team stepped up in what was Argentina’s most vibrant half in the entire tournament. There was courage, belief and an unconquerable spirit. The full-backs would keep marauding upfield like Nahuel Molina showed when setting up the goal for Mac Allister. The midfield suddenly resembled a floating spaceship gliding above the earth, exhaling earth-consuming fire. Then, after an elaborate, 27-pass goal, a moment when the ideals of Bielsa and Cruyff blended seamlessly, Julian Alvarez doubled the lead.

He, like Mac Allister, searched for Messi and rushed towards him. Like a student would to a teacher he adores. Alvarez was five when Messi made his Argentina debut. The whole of his childhood and teenage years, he would only wear a cheap replica of Messi jersey wherever he went. When he was 10, he cajoled his father to take him from his hometown Calchin in Corboda to Buenos Aires to watch Messi practise before a friendly game. He even managed to take a picture with him that he posted when the national team called him up for the first time. “Messi has been my idol since I was a child, He is my family’s idol, the idol of my brothers too. Messi is a hero for me. Playing for my country is a dream come true. I dreamed as a child to play in the national team with him,” he said in post on Twitter.

In a sense, it is a Messi generation doing their best just to see him lift a World Cup. Before the World Cup, Alvarez would say: “We owe him the World Cup. Football owes him the World Cup.” His Manchester City teammates consider him shy in front of the mic, but when it comes to Messi, he is not only vocal but unstoppable. Some Alvarez fans at City call him the “New Messi”. The comparison makes him feel uncomfortable, besides he says he is a “different sort of a player”.

It is as if the entire team is bound by the singular dream of not just winning the World Cup, but winning it for Messi. Living the dream that Messi is living and living the dream that Messi lives his dream. Argentina were once accused of being merely a collection of fine jewels that seldom sparkled together. Not this team. This team is sparkling as brightly as possible so that their brightest jewel can shine forever.

Did not look at scoreboard while batting: Sunil Gavaskar