Prasad’s committee has picked the 21-year-old as India’s first-choice ‘keeper-batsman across formats, with an eye on the future.

A day after Rishabh Pant let his team down with his shot selection — caught at short fine leg off the fourth ball he faced — in the second T20 International against South Africa, chief selector MSK Prasad said there were players being groomed for the slot though Pant remains the first-choice for now.

Prasad’s committee has picked the 21-year-old as India’s first-choice ‘keeper-batsman across formats, with an eye on the future.

Speaking to The Indian Express, Prasad spoke about monitoring Pant’s workload and grooming his backups. “We are monitoring the workload of Rishabh. Of course, we have been grooming backups across all formats. We have the young KS Bharath doing well in the longer format for India A. We also have Ishan Kishan and Sanju Samson doing well in the shorter formats for India ‘A’ and domestic cricket,” Prasad said.

The chief selector said the selection committee has faith in Pant’s ability as of now.

“I have already said that post World Cup we have been concentrating on the progress of Rishabh. We need to be patient with him, considering the immense talent that he possesses,” the chief selector added. Rishabh Pant’s impetuous batting, especially early in his innings, has not gone down well with the team management. (Express photo by Kamleshwar Singh)

Pant, at the moment, is in the middle of a ‘careless-fearless’ debate. Ahead of the second T20I, India’s new batting coach Vikram Rathour had advised him to think his innings through. “I think he is a phenomenal player. There is no doubt about that. But what he needs to do is to sort his game plan. He needs to be more disciplined and all the young players like him need to understand that there is a fine line between fearless cricket and careless cricket.What the team management is asking from them is to be fearless. About having a clear game plan and playing with intent. Focus should be batting to your strength and at the same time, one cannot be careless. I am sure they have started to understand that,” Rathour had said.

Read | There will be rap on the knuckles, talent or no talent: Ravi Shastri to Rishabh Pant

On Wednesday, when Pant came to the crease at No.4, ahead of Shreyas Iyer, India were 94 for two after 11.4 overs, chasing 150 for victory. The required rate was below seven and Virat Kohli had been bossing at the other end. With 11 Tests, 12 ODIs and 19 T20Is already under his belt, the left-hander was expected to read the match situation well.

He just had to play second fiddle to his captain and see his side through. Like the World Cup semifinal against New Zealand at Old Trafford, in Mohali also, Pant fell prey to his batting indiscipline.In 19 T20Is, Pant has only four 30-plus scores and this could be a reason why Kohli, unlike the selection committee, is seemingly reluctant to write off Dhoni as far as international cricket is concerned. The next World T20 in Australia is a little over 12 months away. 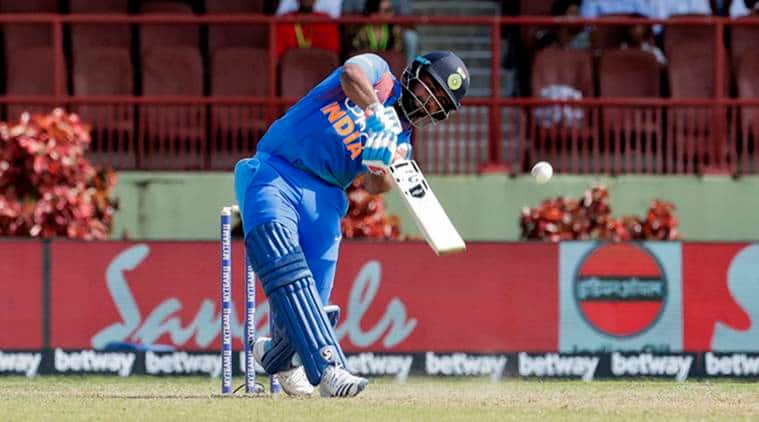 Rishabh Pant will be “rapped on the knuckels” if he keeps on playing rash shots. (Source: PTI/AP)

At the press conference before the first T20I in Dharamsala, the India captain had spoken about the “alignment” between his predecessor and the team.

“One great thing about him (Dhoni) is that, he thinks for Indian cricket. And whatever we (team management) think, he is on the same page. The alignment is there. The kind of mindset he has had about grooming youngsters and giving them opportunities, and he is still the same person,” Kohli had said.

At 38 years of age, the next 50-over World Cup is probably beyond Dhoni, but the World T20 is not too far away and he hasn’t called time on his international career yet. Also, as a Chennai Super Kings official confirmed, Dhoni will lead the franchise in the next year’s IPL.