Vidarbha's Ranji Trophy team failed to make it a hat-trick of titles, so, a lot was riding for them in the CK Nayudu Trophy, and they registered eight outright wins and three draws from 11 matches. 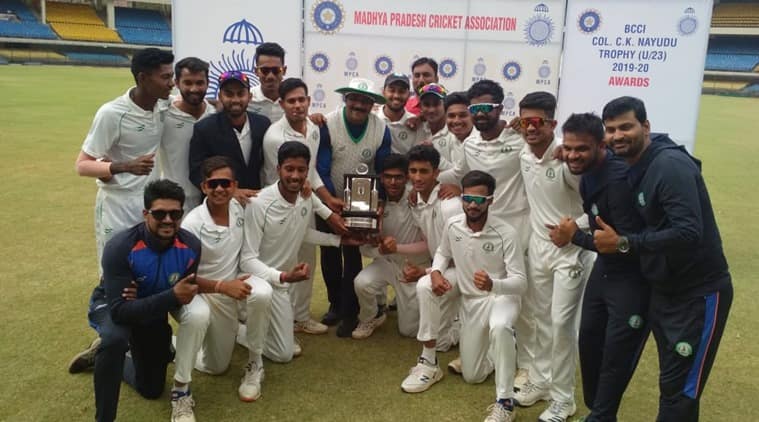 With the U23 CK Nayudu Trophy win, Vidarbha collected their ninth domestic trophy in the last two years.

After beating hosts Madhya Pradesh to clinch the U-23 CK Nayudu Trophy in Indore on Saturday, the Vidarbha team got into a huddle for a selfie and a huge cake was cut before the players packed their bags and left to catch a flight to Nagpur. One would have expected a bigger celebration, considering this was Vidarbha’s only title this season. On their way back, coach Trevor Gonsalves and Vidarbha Cricket Association (VCA) vice-president Prashant Vaidya were busy chalking out a road map for the next season. This, in essence, summed up Vidarbha cricket — low-key, understated but driven and passionate.

This win notwithstanding, it’s been a season of disappointments for Vidarbha. Their Ranji Trophy team failed to make it a hat-trick of titles, and even failed to qualify for the knockouts this time around. Their U-23 one-day team failed to progress beyond the quarterfinals, going down to Chandigarh in a rain-affected encounter. So, a lot was riding for them in the CK Nayudu Trophy, and Vidarbha gave a terrific account of themselves, registering eight outright wins and three draws from 11 matches. By winning the long-format U-23 tournament, Vidarbha collected their ninth trophy in the last two years, thus reaffirming their status as a domestic powerhouse with an abundance of emerging talent.

From allowing U-23 players to team up with the senior team during the off-season and roping in military personnel for lectures on mental fortitude, to asking players to come for nets at 2 am, the think tank showed they were willing to think out of the box in their planning.

Perhaps this was the reason why the colts managed to stage monumental comebacks from crunch situations. Captain Atharva Taide cited the example of their win over Rajasthan in a league match. “We were bundled out for 66 while batting first on a greentop in Jaipur. Despite that, we displayed the tenacity to stage a comeback and register an outright win.”

READ | Ranjitsinhji: A legacy that’s older than the trophy

Gonsalves is extremely satisfied with this title, but like his players and other coaching staff, extremely measured. “This is something that we had set out to achieve 10 months ago. It’s our meticulous planning and preparation that has helped us get here,” he told The Indian Express. Back in May 2019, Vaidya gave Gonsalves two clear directives: First, ensure the U-23 squad wins the CK Nayudu Trophy. Secondly, assemble a pool of players ready to play Ranji Trophy. The coach succeeded on both fronts.

“While planning for this season, (Prashant) Vaidya had told me that the senior Ranji team would need a steady supply of players from the junior level. That’s exactly what happened, with seven players making their first-class debut this year. These include pacers Yash Thakur, Darshan Nalkande and Aditya Thakare, along with batsmen Atharva Taide, Anirudh Chowdhury, Mohit Kale, and Siddhesh Vat,” Gonsalves explained.

All these players made the step up to first-class cricket based on their consistent performances at the U-23 level. Thakare, with 47 scalps from seven matches, finished as the highest wicket-taker in this tournament; others like Vat contributed over 1,000 runs, while captain Taide had in excess of 800 runs to his credit.

Gonsalves insisted that all these players have emerged from a systematic channel that’s working to unearth talent from the districts. Vidarbha being a relatively small area, the VCA has to scout in only 10 districts under its jurisdiction. “We have a channelised programme working in the districts. If any player manages to impress us, we bring him to the VCA academy in Nagpur and train them. We have a convenor for each district and there are committees under them. Under them are the selectors. VCA also has a coach’s academy in Nagpur, where coaches are trained and sent to these districts to improve the techniques of players,” he noted.

There’s the Guzder League, which also serves as a platform to judge upcoming talent. “Guzdher Trophy is played along division lines. These are essentially clubs affiliated with the VCA who compete in three divisions. Then there are a host of other local tournaments that are being conducted in the names of former cricketers,” he added.

Perhaps the biggest reason for the seamless transition made by these U-23 cricketers to the Ranji Trophy was the plan put in place by Vaidya, in consultation with Gonsalves and senior team coach Chandrakant Pandit. “During the off-season — between June-September — we clubbed members of the Ranji Trophy team with the U-23 squad into a single pool. They trained together and spent time discussing ways to improve their game. It was a hectic camp, scheduled from 9am to 6pm. This stint helped them enormously,” Gonsalves opined.

Such an arduous training regime was interspersed with military personnel giving team lectures on mental fortitude and nets session at 2 am at VCA’s indoor academy. “The purpose of this exercise was not to teach them cricket or fine-tune their techniques but to make them mentally tough and prepare them to come out and bat under any circumstances. For instance, you may be a middle-order batsman batting at No.5 or No.6. But in a four-day match, you can lose three quick wickets and suddenly you would be required to bat. So, this was done to make these guys be prepared for any eventuality.”

Once the 15-member U-23 squad was selected, care was taken to ensure the players got adequate rest and their diet was also monitored by the team physios. As per the diktat from the association, players’ phones were confiscated on match days to keep them away from distractions. All these measures helped them stay focused and be in the right frame of mind. In the midst of the congratulatory messages and platitudes he’s received over the last two days, one sent by a player’s parent caught Gonsalves’s attention. It read: “Itne saal se jo hum nahi kar paaya, woh aap kar diye. Thank you.”

More than the trophies, it’s such messages that gave the coach a sense of fulfillment.