The history behind feud between Marlon Samuels and Shane Warne

Chronicles of a not-so-subtle feud between Marlon Samuels and Shane Warne. 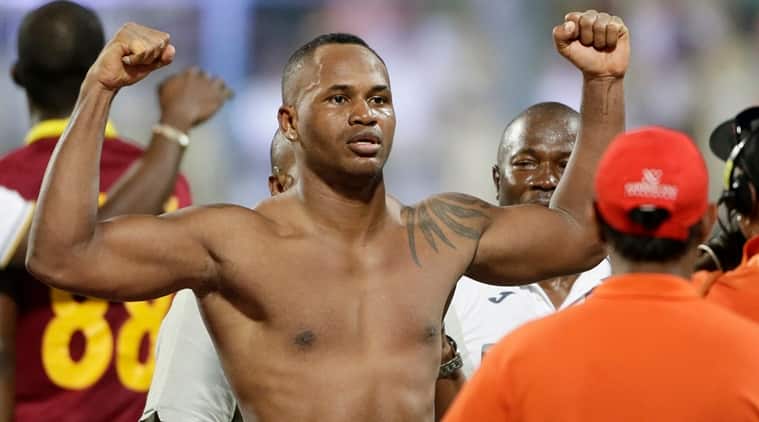 Marlon Samuels scored 85 from 66 balls with the help of 9 fours and 2 sixes against England. (Source: AP)

January 6, 2013: During a Big Bash match between Melbourne Stars and Melbourne Renegade, Marlon Samuels pushed David Hussey when the latter was sprinting for a double. Warne, who was holding the microphone, did not hold back any words and when his turn came to bowl, he grabbed Samuels’ collars. Warne then stopped a shot from Samuels and flipped it straight back at him. Samuels threw his bat over Warne’s head, prompting umpires’ intervention. Warne then defended his action, saying: “What are you meant to do when someone throws a bat at you?” (STATS || POINTS TABLE || FIXTURES)

January 7, 2013: The leg-spinner was fined 4,500 AU and slapped a one-match ban for the use of obscene language. Samuels, too, was handed a hefty fine. However, Warne later apologised for his behaviour.

March 31, 2016: Three years later, Warne could not resist another dig at Samuels, after the latter’s patchy show against the semifinal against India. “Well, this is a bit embarrassing for Marlon Samuels. Look where he is. He’s nearly off the pitch backing away again. He’s backed away every ball. And all it was was just a normal length ball from Ashish Nehra. For your No.3, Marlon Samuels, in this situation in such a big game, that’s an embarrassing dismissal. That’s pretty poor. He’s too cool to be schooled,” he quipped.

April 3, 2016: Samuels, after producing an outstandingly composed knock, retorted to him in kind.After receiving the Man of the Match Award, he fumed: “I woke up this morning with one thing on my mind. Shane Warne has been talking continuously and all I want to say is ‘this is for Shane Warne’. I answer with the bat, not the mic. I know about finals, when I come to finals, I turn up for the team.” It didn’t stop there. He took it to the press conference, where he wondered why Shane Warne doesn’t like him. “I don’t know why he hates me…maybe it’s because my face is real and his is not”

Read: Marlon Samuels hits back at Shane Warne: Maybe I have a real face and he doesn’t

April 3, 2016: Shane Warne (whether he knew about Samuels’s jibe we know not), but praised him on twitter. “Congrats to both teams on an amazing final. Well done to the WI, well played Marlon & great hitting Brathwaite. Bring on some dancing haha !”.