Rohit Sharma and Rahul Dravid have a ready replacement available in Rishabh Pant, who can open the innings in addition to keeping wicket. 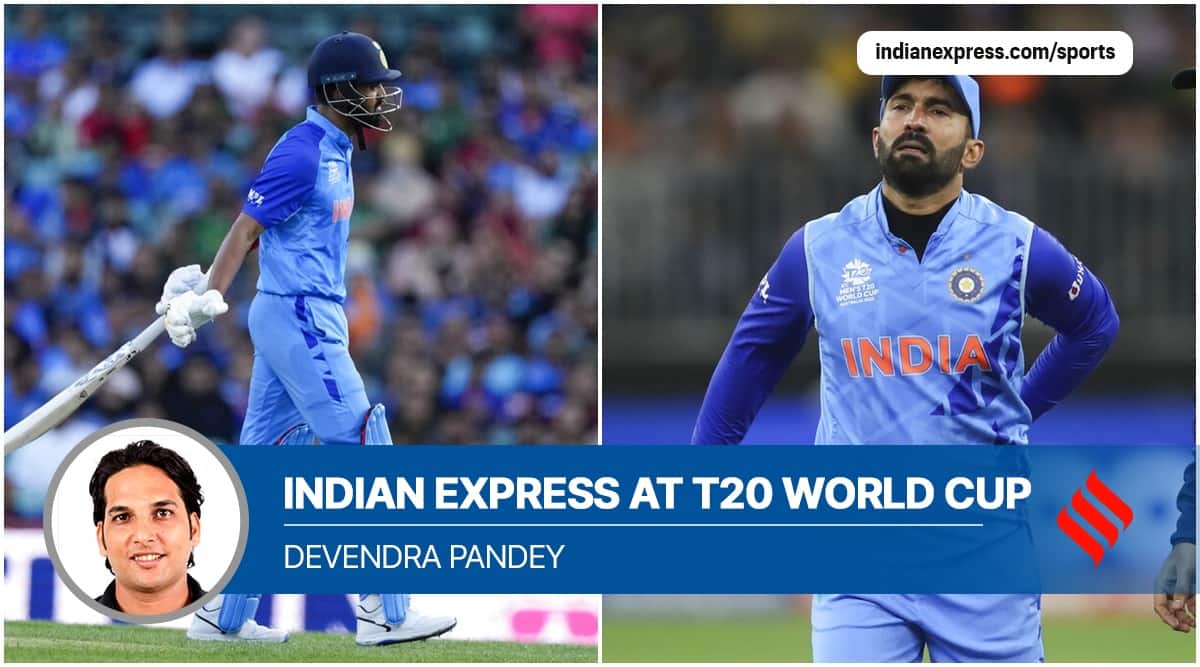 Captain Rohit Sharma and coach Rahul Dravid have at least a couple of selection dilemmas, concerning KL Rahul and Dinesh Karthik, to mull over. (AP)

After their batsmen succumbed to South Africa’s pace and bounce on a fiery Perth pitch on Sunday, the India team management will have had some time to reflect on their first defeat in the T20 World Cup on the three-hour flight from the Western Australian capital to the South Australia capital, Adelaide. And as they prepare to meet their next opponents, Bangladesh, at the picturesque Adelaide Oval on Wednesday, captain Rohit Sharma and coach Rahul Dravid have at least a couple of selection dilemmas, concerning KL Rahul and Dinesh Karthik, to mull over.

Rahul has had a dry tournament, with scores of 4, 9 and 9 so far. He’s been highly tentative in the middle, and the manner of his dismissals has made former India captain Sunil Gavaskar raise questions over his footwork and frame of mind. Will India continue to persist with their opener or will they consider giving Rishabh Pant or someone else a go at the top of the order?

And will Dinesh Karthik continue to be the finisher of choice after twin failures against Pakistan and South Africa? On Monday, Karthik wasn’t named in the squad for the three T20Is against New Zealand scheduled immediately after the T20 World Cup, but chief selector Chetan Sharma refrained from commenting on the team management’s selection choices in Australia, saying that picking the XI was their prerogative.

Rahul in a shell

Rahul came into the T20 World Cup on the back of four successive fifties, against South Africa at home and in the practice games. But he seems to have gone into a shell since; against Pakistan, he inside-edged a nervy defensive prod onto his stumps; against Netherlands, he went leg-before to an incoming delivery, and didn’t even review the decision, even as replays would later show the ball to be missing leg stump; against South Africa, he tamely guided a shortish delivery straight to slip.

During the Netherlands game, Gavaskar said that Rahul’s first movement of the left foot gets him into a problem. It’s clear that he needs to get it sorted out. He doesn’t really commit forward or back or stay still – one of the three decisive elements is needed; instead he sort of wobbles a bit, and has been getting tentative with his defensive prods. Gavaskar has also blamed Paddy Upton for “not doing anything with Rahul,” and added that the team’s mental conditioning coach should impress upon the opener that he can get the big scores.

The team management has backed their first-choice opener until now. Especially with India’s two remaining group games to be played against smaller opponents in Bangladesh and Zimbabwe, there is a case for him spending some time in the middle and attempting to rediscover his rhythm ahead of the semi-finals.

The India team management, along with the senior selection committee, had picked the 37-year-old Karthik specifically for the finisher’s role, a new position that the team hadn’t designated before. The specialist of death-over batting, they called it. Karthik’s performance before the World Cup, including in the Indian Premier League, also made mostly the right noises.

In Karthik’s defence, he has batted only twice so far in the tournament. Against Pakistan, he went second ball, and that too against spin, which isn’t his strongest suit. Against South Africa, it was not just Karthik but the entire batting line-up that failed to fire, barring Suryakumar Yadav.

Like in Rahul’s case, it can be argued that Karthik might have a better chance of getting some runs against Bangladesh and Zimbabwe to boost his confidence. The team management has invested immensely in Karthik after the IPL in the build-up to this World Cup, and it will be interesting to see how long a rope they will afford him as the business end of the tournament approaches.

Pant recently expressed his desperation to get a game during a nets session. Former India opener Virender Sehwag wants Pant to play as he has done well in Australia in the past, while Karthik has been more successful in subcontinent conditions. In fact, there isn’t too much of a difference in their T20I strike-rates this year: Pant’s is 136.84 from 17 innings, Karthik’s is 141.41 from 21 innings. The team management has already tried Pant as an opener before and it shouldn’t be a surprise if he is asked to face the new ball again.

Meanwhile, Karthik had to go off the field in the last few overs against South Africa due to back issues but he looked alright on the flight to Adelaide. The team will assess his situation before the Bangladesh game. If Karthik were to be ruled out, India have a ready replacement anyway.

India had opted for off-spin all-rounder Deepak Hooda over left-arm spinner Axar Patel in Perth, with South Africa having four left-handers in their top seven. Hooda didn’t bowl and fell for a three-ball duck. Will Hooda get one more game? Adelaide won’t be like Perth, where fast bowlers called all the shots and spinners found no purchase. However, even Bangladesh have plenty of left-handers, and Hooda’s had just one bad game. This one is more tactical, though, unlike Rahul and Karthik’s cases.