India will lock horns with their arch-rival Pakistan in the ICC Men's T20 World Cup on October 23 at the MCG. 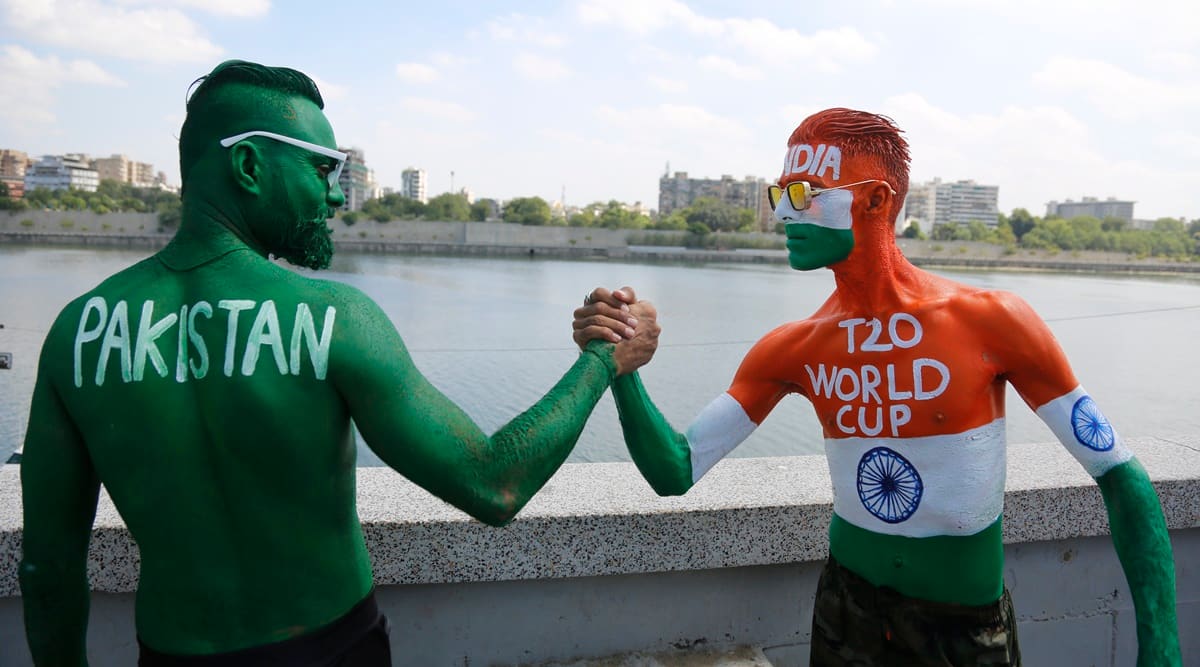 India and Pakistan cricket fans pose for photograph, in Ahmedabad on Saturday, ahead of a clash between the two teams in the T20 World Cup. (Photo: AP)

Come October 23, India will lock horns with their arch-rival Pakistan in the ICC Men’s T20 World Cup. India-Pakistan is the most predictable early-round fixture in ICC tournaments will be played in the T20 World Cup when India and Pakistan square off at the Melbourne Cricket Ground. The two countries now play only in ICC events, with no bilateral series since 2013.

One of the reasons is this match helps the world body with a big windfall in terms of gate money and eyeballs on television guaranteed.

Such is the demand to see one of world cricket’s biggest rivalries, the allocations for the India vs Pakistan match to be played at Melbourne Cricket Ground on October 23 were sold within five minutes of going on sale.

India and Pakistan clash on the opening weekend of the main round of the tournament at the iconic MCG. More than 90,000 spectators are expected at the stadium for the match. It is expected to be their first encounter since the T20 showpiece in the UAE late last year when Pakistan broke their World Cup duck against India.

ICC men’s T20 World Cup 2022 Local Organising Committee CEO Michelle Enright said: “The response from the fans has been fantastic and we’re proud of the fact we were able to reward our fans who purchased tickets to the postponed event in 2020 and those who registered early with us to get priority access to tickets in the pre-sale.”

According to Broadcast Audience Research Council India (BARC), a TV audience measurement service, the India-Pak game in the 2021 T20 world cup soared up to 167 million viewers on television alone in India. According to the ICC, the India-Pakistan game in the 2019 ODI world cup had 273 million viewership worldwide and 50 million digital-only viewers.

It’s the first time that Australia will host T20 cricket’s global showpiece for men, with matches to be played in Adelaide, Brisbane, Geelong, Hobart, Melbourne, Perth, and Sydney.

The fixture for the event was recently announced with the First Round to get underway in Geelong and Hobart featuring former champions West Indies and Sri Lanka, before hosts and defending champions Australia take on New Zealand in the opening match of the Super 12 at the SCG on Saturday 22 October in a re-match of the ICC Men’s T20 World Cup 2021 Final.