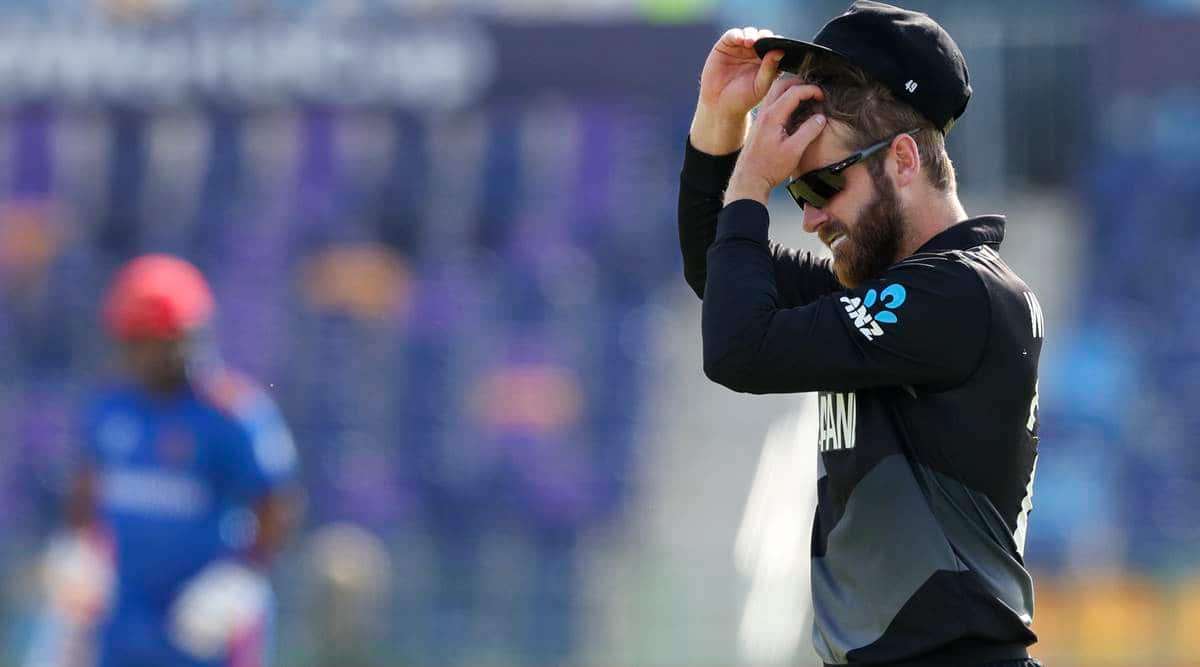 New Zealand vs Afghanistan, T20 World Cup Highlights: New Zealand beat Afghanistan by eight wickets in their final Super 12 match to qualify for the semi-finals and send India out of the T20 World Cup on Sunday. New Zealand chased down the small target of 125 with 11 balls to spare to secure a top-2 finish in Group 2 with eight points from five matches.

The win by the Kiwis meant that India — currently with four points from four matches — cannot qualify for the semifinals even if they beat Namibia in their final Super 12 on Monday. Afghanistan ended their campaign on four points from five matches from which they secured two wins.

Captain Kane Williamson top-scored with an unbeaten 40 while Devon Conway contributed 36 not out. For Afghanistan, Mujeeb Ur Rahman and Rashid Khan took a wicket each. Earlier, opting to bat, Afghanistan posted 124/8.

Wicket No. 400 and he is just 23. Rashid Khan had Martin Guptill on a hook with a loopy googly and the New Zealander succumbed to the big slog sweep. But the ball never quite arrived. It dipped and Guptill lunged but could only meet thin air as the ball lit up the stumps. At the end of the game, Khan had one of his team-mates hand the ball to him and as he shook hands with the incoming Guptill, he stopped him for a short chat, and gestured the ball clasped on his left hand. Perhaps, an autograph on the ball later? The other day Dale Steyn couldn’t control an incredulous laugh when he was talking about Khan. “Just 22-23. He will play till at least 40-42. How many thousands of wickets is he going to end up with?!”

Devon Conway hits the winning runs. New Zealand completes a clinical run chase to qualify for the semifinals of the T20 World Cup. 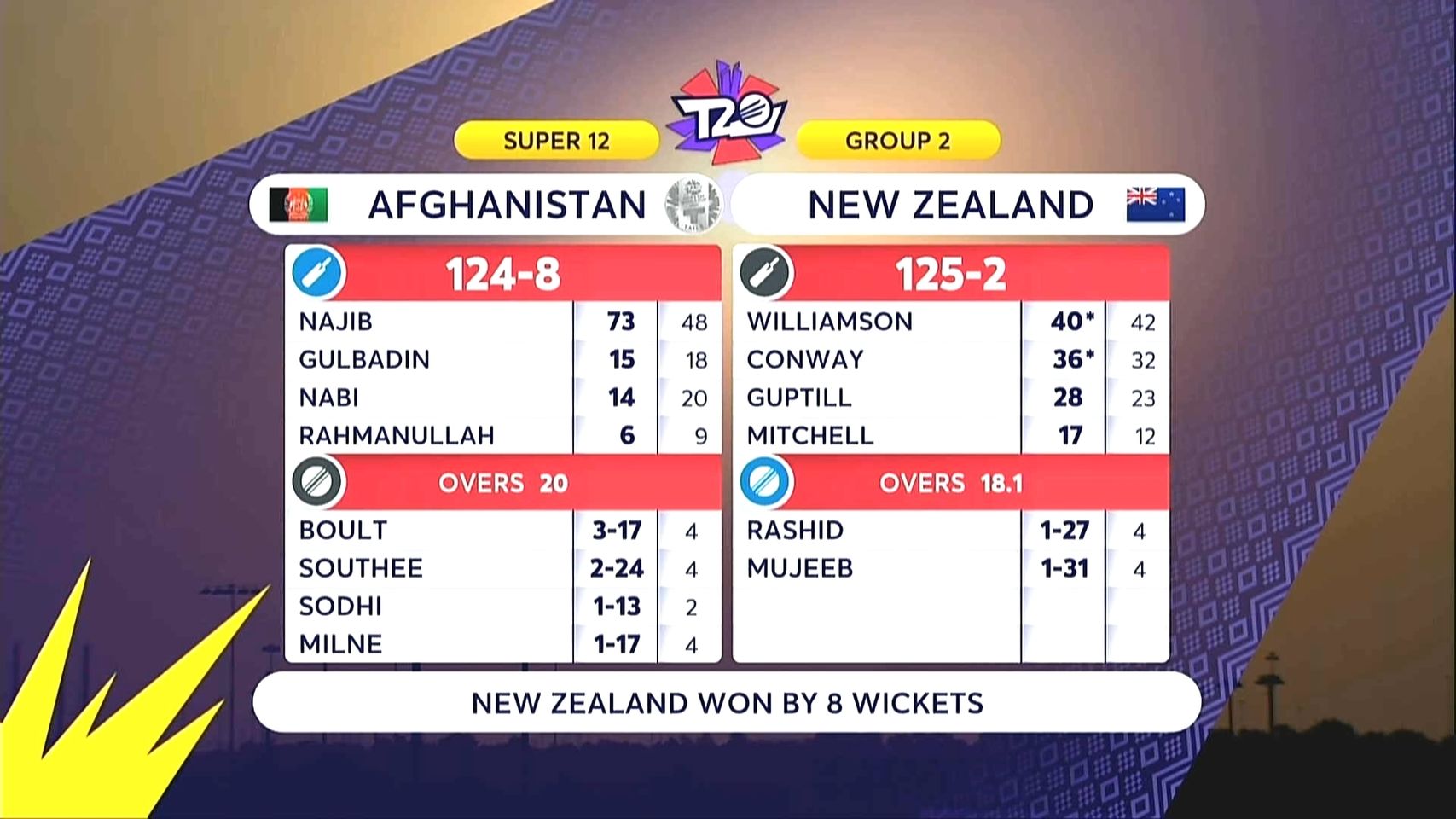 A full toss from Hamid and Williamson pushes it through the vacant extra cover region. The boundary brings up the fifty partnership. New Zealand are heading towards a win.

Conway takes on Nabi and sweeps him twice to get the boundaries. 13 runs come off the over. New Zealand firm favourites now to progress into the semis.

Williamson reads the googly and he waits for it and then guides it past the diving mid-wicket fielder. No chance for the man in the deep. Superb timing on that shot, didn't over-hit. NZ: 70/2 after 12 ovs

Mohan Singh worked extensively with former BCCI chief curator Daljit Singh in Mohali before moving to the UAE in the early 2000s.https://t.co/9LERw59yWr

Cheeky from Mohammad Shahzad behind the stumps as he taunts Williamson. But Indian fans will be feeling the heat and its time for a throwback to this video below 😳

Guptill goes for a big sweep against him but sees his stumps castled. That means Rashid now has 400 T20 wickets.

Perfect powerplay for the Black Caps in this lowish chase. The required rate is well below run-a-ball due to this start and that means they can play Rashid as carefully as they want. How long before Afghanistan unleash their strike bowler. NZ: 50/1 in 7 ovs

Mitchell's wishlist for superpower was flying: The blur lines between the minor muggle sport of cricket and wizarding major Quidditch are disappearing. Though it was from the country that posed as Middle Earth in Frodo's shire, New Zealand, that the top fielding effort emerged. There was no broomstick in sight, but Daryl Mitchell doesn't seem to need one to fly about when manning the feverish fences. Fanning about cow corner on the first delivery of the last over with Rashid Khan trying to set the tone, Mitchell watched Neesham's short delivery gaining elevation and dipping out-bounds, pulled by the Afghan. It's one of those fielding efforts in vain that look silly when the camera zooms into the fielder's feet that have crossed the boundary rope. But like an ace Seeker for Gryffindor, Mitchell would jump falling backwards, catch hold of the fluttering golden Snitch with the outstretched right hand and fling it safely inbounds to save a sureshot 6. Last ball, with only two runs added by Rashid, and Neesham assuming duties of an effective Beater, it was captain Kane who would pluck Rashid's mistimed ball out of air in the covers, and quieten the golden Snitch.

Daryl Mitchell falls for 17 caught behind off the first ball of the fourth over to Mujeeb. NZ: 26/1 as Williamson arrives to join Guptill.

NZ off to a good start

Martin Guptill & Daryl Mitchell off to a confident start in 125 chase. NZ: 26/0 after 3 ovs, need another 99 runs to win. Regardless of outcome, Afghanistan have played amazing cricket in this tournament. There is only forwards and upwards for the team.

After a strong middle over rebuild #AFG were unable to capitalise at the death thanks to some excellent wicket taking by the #NZ pacers. #T20WorldCup #NZvAFG

Daryl Mitchell almost pulls off a one-handed catch for the ages at the ropes, but has to throw it back in... saved four runs though.

Najibullah departs after playing an impressive knock of 73(48).  His 73 has given Afghanistan's bowlers something to work with. AFG: 119/6 in 18.2 ovs

However, a silly error from Najibullah as he runs one short. AFG: 101/4 after 17 ovs 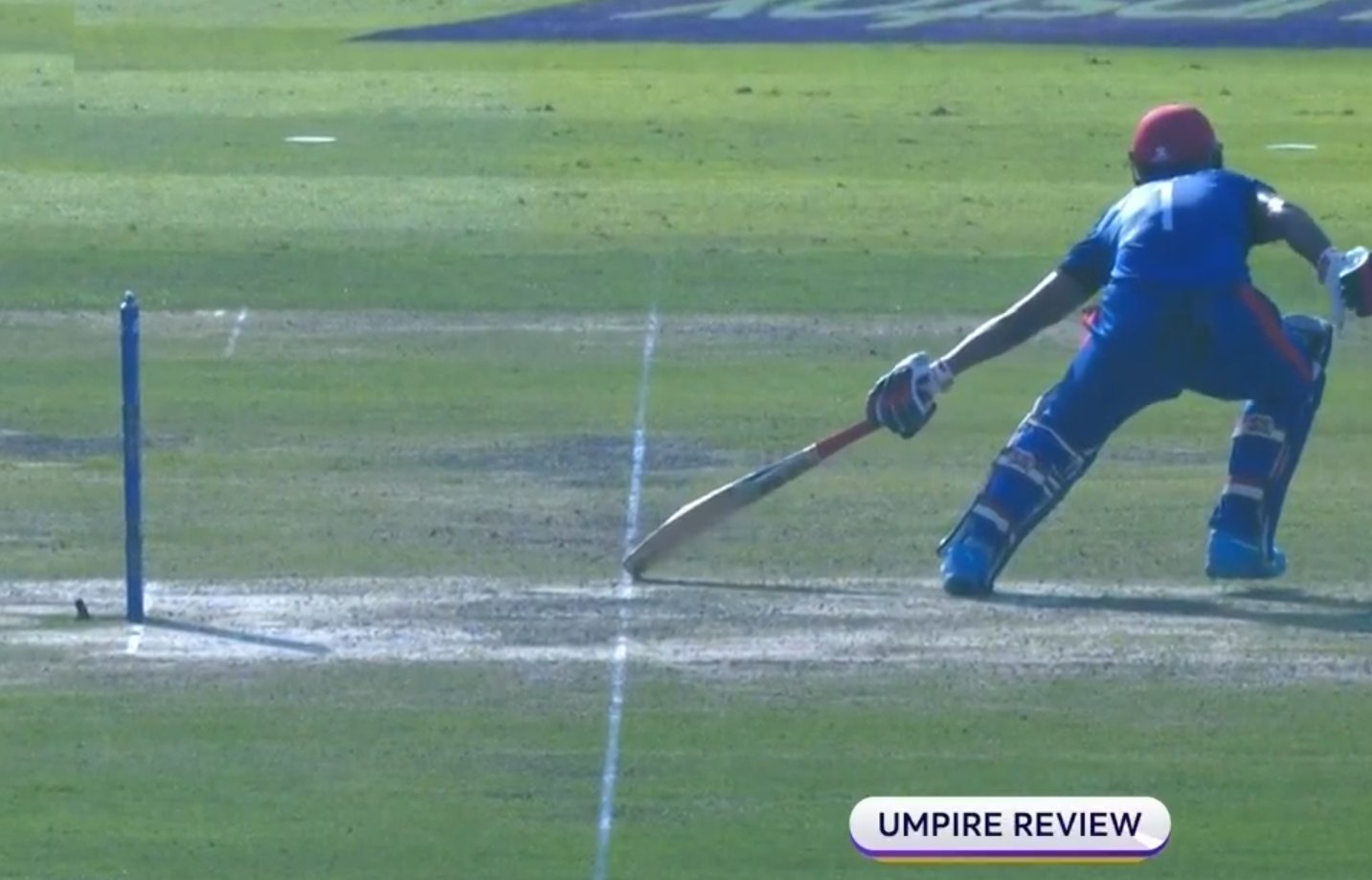 How good has Najib been?

Najibullah Zadran’s middle overs batting has been a real positive for Afghanistan in today’s game and throughout the T20 World Cup, he’s averaging 52 runs per dismissal with a 126 strike rate across the tournament in the overs 7-15 phase. ( via cricviz)