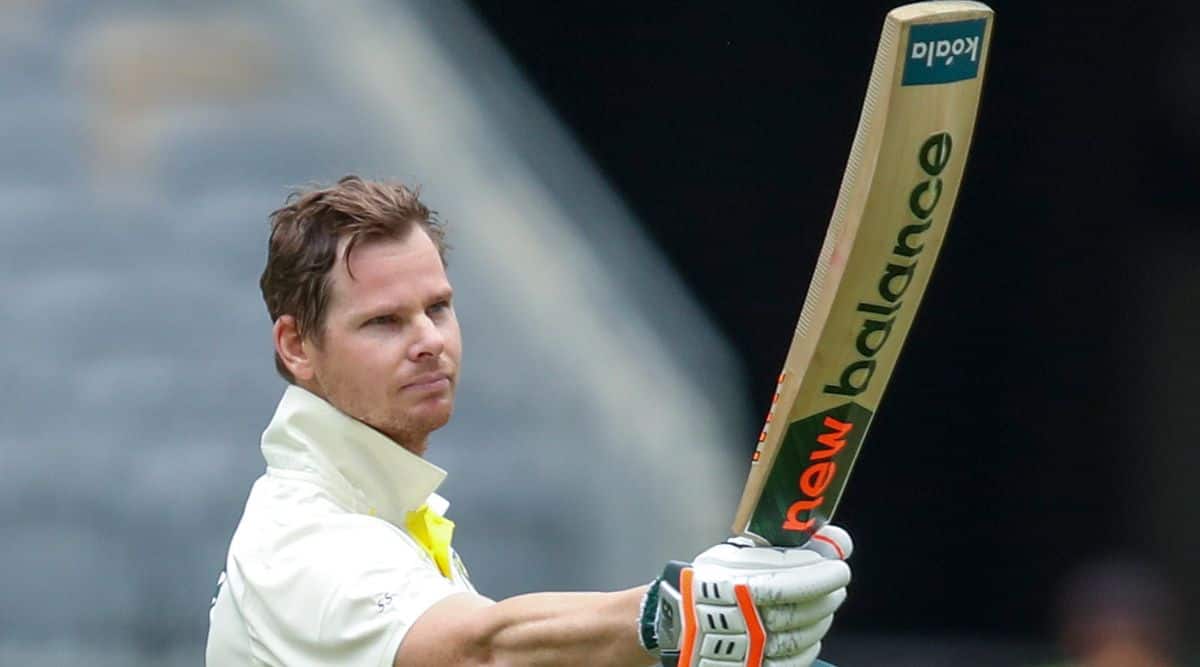 Australia's ace batsman Steve Smith explained the reason, before they flew to Bangalore, where they would be based for five days, on Monday evening. (AP Photo)

Steve Smith scored an unbeaten 114 to equal Donald Bradman’s 29 Test centuries and help Australia tighten its grip on the opening cricket test against the West Indies on Thursday.

It was one of the more mellow century celebrations from Smith. He gently acknowledged the crowd and his wife Danni at the stadium. Former Australia captain Ricky Ponting said on Channel Seven: “I’m not sure if I’ve ever seen him bat better.”

Incidentally, when Sunil Gavaskar reached his Bradman-equalling 29th hundred in New Delhi in 1983, he wasn’t even aware initially of the landmark. It was one of his great counterattacking knocks, hooking and pulling Malcolm Marshall and Michael Holding. The fifty came in 37 balls, and the 100 in 94. So, focussed was he that it was left to Dilip Vengsarkar to yell out, “Bloody hell, it’s your 29th!”.

Marnus Labuschagne (204) fell to the last ball before lunch on the second day as Australia went into the break on 402-3, ending a 251-run stand for the third wicket.

Labuschagne, who smashed fast bowler Jayden Seales for his 20th boundary to bring up the milestone, fell when he edged offspinner Roston Chase as wicketkeeper Joshua Da Silva finally held onto a catch having dropped Labuschagne twice on 132 and 194.

Australia resumed the second day on 293-2 with Labuschagne on 154 and Smith on 59, and the West Indies desperate for a breakthrough in cloudy conditions conducive for swing bowling.

Instead, Labuschagne and Smith continued from where they left off overnight and stubbornly piled up the misery on the tourists, taking the game away with each run.

Smith was more circumspect and hit just nine boundaries in his century that came off 179 balls. It was Smith’s second century in the space of three innings following his 145 not out against Sri Lanka in Galle in July this year.

Labuschagne’s double century is his second since his 215 against New Zealand in Sydney in January 2020. He batted for 483 minutes and hit a six and 20 fours of 350 balls.

After losing opener David Warner cheaply on the first morning, Labuschagne partnered opener Usman Khawaja (65) in a 142-run second-wicket stand to set up the innings.

Australia won the toss and elected to bat first in the first of two tests. The second test, a day-night game, will be played in Adelaide beginning Dec. 8.

‘If Karthik or Pandya would’ve hit those sixes, I would’ve been hurt but it was Kohli and he is a different class’: Haris Rauf