Sourav Ganguly out of BCCI after declining IPL chairman post; BCCI won’t back him for ICC chairman’s post

1983 World Cup winner Roger Binny is set to take over as president; Jay Shah will continue as BCCI secretary; Rajeev Shukla to be vice-president.

The BCCI won’t back Ganguly for the post of chairman of the International Cricket Council even if the former India captain desires to move the game's global governing body. (File photo)

Former India captain Sourav Ganguly is about to become a former BCCI president and unlikely to be the cricket board’s choice for the post of ICC chairman, either — even as secretary Jay Shah is expected to continue with his “team” set to take charge of key positions, The Indian Express has learnt.

Also Read |After BCCI vs Supreme Court, it’s back to status quo

In fact, the BCCI election next Tuesday is expected to be a formality since none of the office-bearers’ posts had more than one nomination on the first day of filing the papers. With Wednesday being the last day for filing nominations, those in the know say the new BCCI power panel has already been decided and a consensus reached after several rounds of talks over the past month.

During the first tenure of Shah, who represents the Gujarat Cricket Association, Ahmedabad had virtually become the headquarters of Indian cricket with all major events hosted at the new Narendra Modi stadium in Motera. 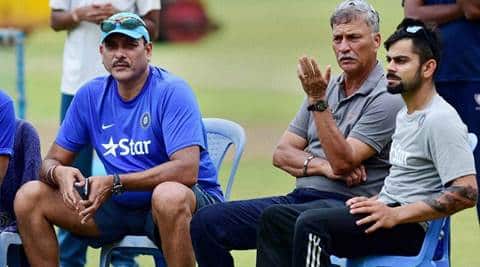 Bengaluru : The then Indian Team Director Ravi Shastri, Team Selector Roger Binny and Virat Kohli during the preparatory camp for the upcoming series against South Africa at NCA in Bengaluru on Thursday. (PTI)

With the unassuming Binny replacing the charismatic Ganguly at the top, Shah is expected to be the face of India’s cricket administration. The influence wielded by Shah, who is the son of Union Home Minister Amit Shah, is reflected in the new board team.

“Roger Binny has filed the nomination for the president’s post, myself for the vice-president’s post, Jay Shah for secretary, Ashish Shelar for treasurer and Devajit Saikia has filed the nomination for the joint secretary’s post,” BCCI vice president Rajiv Shukla, who is the only official besides Shah who is expected to retain his post, told reporters.

Shelar, a BJP MLA, is the party’s Mumbai president and chief whip. He will replace Arun Dhumal, the brother of Sports Minister Anurag Thakur, as treasurer. Dhumal, it is learnt, will be IPL chairman. Saikia is a close aide of Assam Chief Minister Himanta Biswa Sarma.

“Arun Dhumal will head the IPL governing council. As of now, these are the nominations and all are unopposed,” said Shukla, who is the lone Congress representative among the new BCCI decision-makers.

On an eventful day at the Cricket Centre in Mumbai, Ganguly’s future was the talking point. It’s learnt that he was offered the post of IPL chairman. However, sources said, he conveyed that he wasn’t interested, focusing instead on becoming the ICC chairman or continuing as BCCI president. Both didn’t happen. And Dhumal became the consensus candidate for the post of IPL chairman.

Binny is expected to replace Ganguly as BCCI president on October 18 when the BCCI holds its annual general body meeting in Mumbai. The soft-spoken all-rounder and president-in-waiting was a member of the senior selection committee when Sandeep Patil was the chairman. Incidentally, Binny is known to have recused himself from selection meetings whenever his son Stuart’s inclusion in the team was discussed.