Shiv, Shivling and that stance: How Tagenarine Chanderpaul followed his father, grandfather, forefathers

Earlier this week, 26-year-old Tagenarine, making his Test debut against Australia at Perth - not a preferred combination for any newbie got his West Indian Test cap from Brian Lara – game's great to the world, Bri to his father Shivnarine. 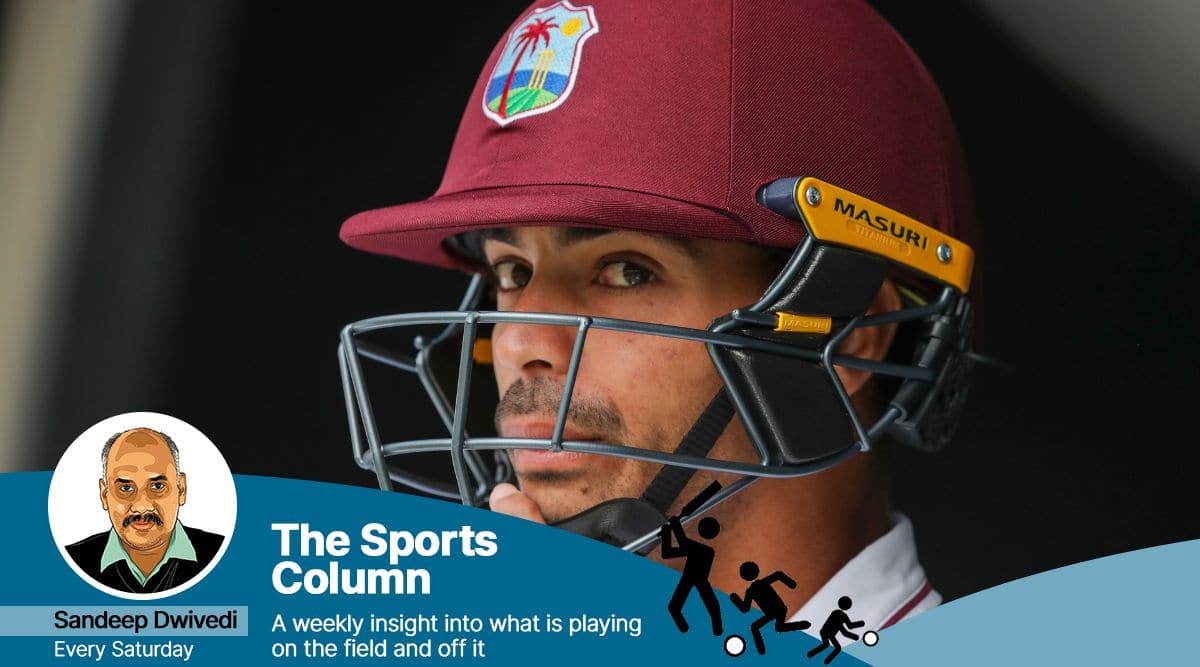 West Indies' Tagenarine Chanderpaul waits to take the filed prior to play on the third day of the first cricket test between Australia and the West Indies in Perth, Australia, Friday, Dec. 2, 2022. (AP Photo/Gary Day)

Who can ever forget Shivnarine Chanderpaul? The same is true for his son Tagenarine. He was barely 10, but looked 7. Even back then, he, like his father, had that charmingly hideous split-leg stance.

This was during the 2007 World Cup in the Caribbean when Grandfather Chanderpaul, Khemraj, had played a gracious host to us, a bunch of adventurous Indian journalists. We had undertaken an hour-long bumpy ride from Georgetown into Guyana’s interior – the Unity Village. Shivnaraine wasn’t at home, he was busy in his futile fight to make West Indies Great Again. Like many after him, he would fail. The hosts, like India, would end up having a forgettable World Cup 2007.

On the front porch of his modest villa, sparsely covered by a nylon net, Little Chanderpaul would keep middling every under-arm tweaker floated at him by the over-eager reporters. Khemraj would flash his toothless smile at the visitors amused by the first sighting of the miniature version of the master.

Earlier this week, the world too had the same endearing gaze on Tagenarine. The 26-year-old was making his Test debut against Australia at Perth – not a preferred combination for any newbie. He would get his West Indian Test cap from Brian Lara – game’s great to the world, Bri to his father Shivnarine.

As is their wont these days, the West Indies bowling attack would prove to be an embarrassment. After watching Australia score 598/4 in five sessions, Tagenarine would walk out to open.He had to negotiate that tricky final session with the infamous Aussie chirping on surround sound.

He would start his innings with that other endearing Chanderpaul habit – marking the crease with the bail. Two of the Aussie bowlers – Mitchell Starc and Nathan Lyon – have bowled to his father in the past. That was no consideration, in professional sport, that’s no reason to go soft. The Aussie pacers tried their best to break open the debutant’s defence, educate him about the horrors of Test cricket.

Tagenarine got hit in the groin area. He grimaced, swallowed the pain and continued. Soon a nasty ball climbed on to him, threatening the helmet visor and cheekbones. This time Tagenarine, on instinct, bent backward from the hip, curled the knee to be in the fetal position. He didn’t break the fall, just touched down on his back. At peace, he watched the deadly ball fly high over the stumps. It’s like he was lying on a Caribbean beach watching stars.

His father too was unflappable, his way to deal with a sudden short ball was not too different. It was something he learnt from teammate Clayton Lambert. That tip helped him survive a hostile spell by the meanest of them all – Wasim Akram.

Once in an interview to cricinfo.com, Chanderpaul had recalled that spectacular last-minute leave. “I saw the ball on my face, so I just threw myself on my bum and the ball missed me and I got up and dusted myself off,” he had said.

After throwing himself on his bum, Tagenarine would throw the kitchen sink at the Aussie bowlers. There was a Cummins short ball that was helped over the fine-leg fence with a quick twist of hips. Passive aggression was what his father was known for and it was the same trait that helped his son in his biggest Test. He walked off the field undefeated, scoring 47 from 72 tough balls. The commentator on air was kind enough to share a cute input – Lara, sitting not too far, had stood up and was clapping with great gusto.

Next day, Tagenarine would complete his half-century. Cricket’s weakness for West Indian nostalgia is well known, the Aussie press would try their best to turn back the clock. Chanderpaul Sr too had a similar debut. It was in Australia and he had also scored a fifty.

The apple had taken longer to ripen but it hadn’t fallen too far from the tree. At Unity Village, they would be celebrating another Test-playing Chanderpaul – both groomed by a fisherman who was living his unfulfilled cricketing dreams through his son and grandson.

That Khemraj meeting from 2007 had a lot to do with India getting knocked out of the tournament. It was the week after Sri Lanka had shattered the Tricolour dream, sending the Indian media contingent scampering around the West Indies to dig stories that would keep the interest back home alive.

Being in Guyana helped. It had a historical, and even a contemporary, Indian connection. Guyana was expecting Rahul Dravid and his men for the Super Eight game at the brand new Providence Stadium. The facility had come up because of the aid extended by the Indian government. The Shapoorji Pallonji Group was in charge of construction. Many of their workers had been waiting to see the Indian cricketers. But that was not to be.

Moving away from the glum stadium atmosphere seemed the right thing. The Chanderpaul story sounded exciting. Locals said a trip to Unity Village was a must for all Indian cricket tourists. A worldly-wise taxi driver had obliged to be the tour guide and ice-breaker for the trip. He knew the area, he wasn’t afraid to knock doors.

Before driving us to meet Khemraj, he took a detour. He stopped at a beer garden – an outdoor bar – owned by Shivnarine’s first wife and Tagenarine’s mother. She was cordial and spoke lovingly about her son and also about life with her ex. An elegant lady with Portuguese blood, Annalee would direct us to our destination – the Chanderpaul abode.

These were also the shores where close to 400 North Indians had been brought by ship in the 19th century to work at sugarcane plantations. Even centuries later, Unity Village hasn’t detached themselves from their roots.

Khemraj’s porch has three Shiva Lingas and colourful jhandis, like the ones seen at temples, lining the roof. One among the 2007 group, espncricinfo’s Rahul Bhattacharya, would revisit Unity Village a few years later and write a delightful and definitive piece on the Hall of Fame cricketer.

He would spend a day with Chanderpaul, who would share his strong religious belief and how he travels with beads and a virtual mandir. “Lord Shiva’s murti, Shiva family pictures. I’d have Hanuman, I’d have Lord Krishna. One with the three of Lord Brahma, Lord Vishnu, Lord Shiva. Mother Lakshmi, Mother Parvati, Mother Saraswati. Basically everything. Everywhere I go, I will always set it up. Prayers in the morning are to Lord Shiva and my meditation is to him.”

Khemraj, too, is deeply religious. Pointing to the Shivlings close to where young Tagenarine was batting at the nets, he had said, “Without God, without prayer, we are nothing.”

Away from the land of their forefathers for centuries, they have stuck to the Gods. Local influence hadn’t weaned off the Chanderpauls of their Indianness nor that charmingly hideous split-leg stance.