Shane Watson to Deepak Hooda: All-round brilliance has been the key in Rajasthan vs Delhi clashes 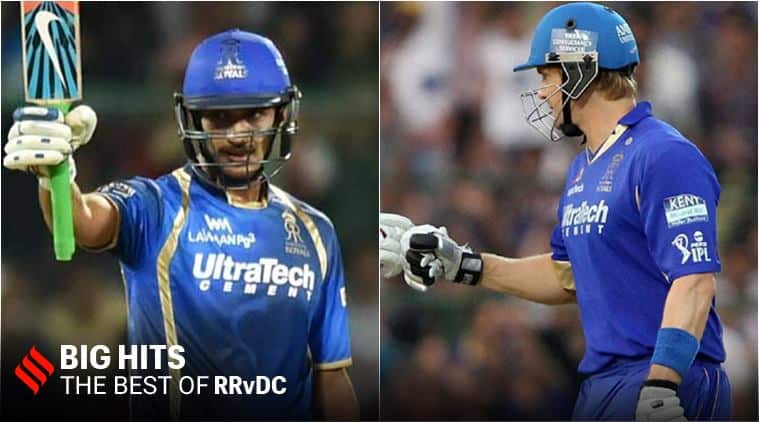 The 13th season of Indian Premier League (IPL) was originally scheduled to kick off on March 29. The Covid-19 virus played spoilsport, however, bringing the sporting world – and with it the IPL – to a standstill. With the IPL season postponed indefinitely for the time being, we at indianexpress.com decided to jog some memories and relive some of the best clashes between the franchises and standout performances. Rajasthan Royals (RR) vs Delhi Capitals (DC) was set to be the blockbuster match of the day (Sunday, April 5) according to the original schedule.

Had things been normal, Steve Smith’s Rajasthan Royals would have hosted Delhi Capitals on Sunday and the only thing that would have been different is Ajinkya Rahane’s jersey color.

Let’s take a look at the history, and the memorable contests and head to head record between the two franchises that have taken over the years.

2008: The first clash between the two

Delhi Capitals, then called the Delhi Daredevils emerged victorious the first time both the teams took on each other. After electing to bat first, Rajasthan Royals could only manage 129/8 on the board, which Delhi chased down comfortably in just 15.1 overs.

Shane Watson’s heroics with both bat and the ball ensured Rajasthan Royals a comfortable win in the semi-final clash against Delhi in the same edition. The Aussie all-rounder scored 52 helping Royals post a stiff 192/9 on the board. Watson then went on to scalp three wickets, bowling at an economy of 3.33. His efforts with the ball helped the Royals bundle out Daredevils on 85.

What initially looked like an easy chase for Royals eventually saw them losing the contest. Chasing 153, Royals started on a solid note with the opening pair of skipper Rahul Dravid and Ajinkya Rahane adding 99 runs for the first wicket. Dravid was dismissed on 40 but Rahane remained firmed at the other end, playing an unbeaten knock of 84 in 63 deliveries. However, his efforts were not enough as Royals fell short by one run.

Deepak Hooda’s 25-ball 54 proved pivotal in Royals 185-run chase. Batting at a strike-rate of 216, he smashed three boundaries and four maximums and was also named as the man of the match. However, what went unnoticed was his contribution with the ball. In the high-scoring contest, his economy stood as the best as he just conceded 20 in his four overs.

The teams have fared against each other in 20 matches, out of which Royals have emerged victorious on eleven occasions. Delhi have won the other nine matches.