In his 100th Ranji Trophy game, Karnataka captain Vinay Kumar rattled Mumbai's batting order, claiming a six-wicket haul and reducing his opponents to 173 all out. 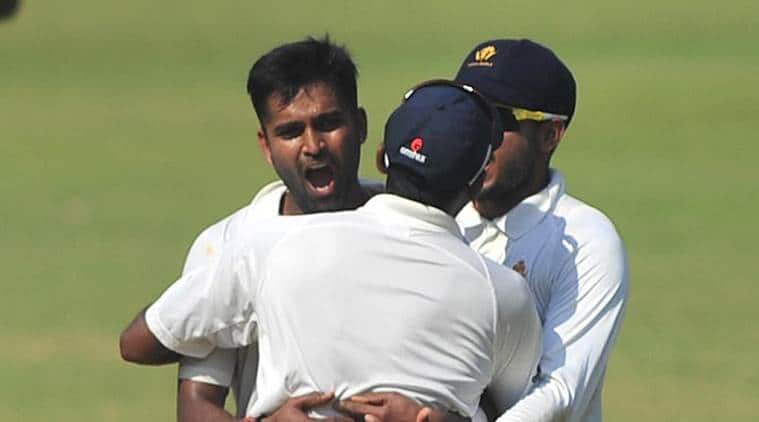 Vinay Kumar led from the front as picked up a six-wicket haul including a hat-trick against Mumbai. (Express photo by Kevin DSouza)

Thursday turned out to be a day of milestones for R Vinay Kumar. When the Karnataka captain walked out with his Mumbai counterpart, Aditya Tare, for the toss in Nagpur this morning, it was his 100th Ranji Trophy appearance. He would make it memorable. On a track with a greenish tinge, Vinay invited Mumbai to bat, taking into consideration that fact that the start of the quarterfinal had been advanced by half an hour. Off the sixth ball of the first over, he induced an edge off the in-form Prithvi Shaw’s bat. As the ball nestled in Karun Nair’s hands at first slip, Vinay went past Erapalli Prasanna to be the Karnataka’s third highest wicket-taker in the trophy.

Vinay is a rhythm bowler. While age blunts a few faculties, it sharpens others. At this stage of his career, the 33-year-old figures out pretty quickly if the ball is coming out his hand as he intends it to. With Karnataka playing mostly on flat tracks this seasons, there weren’t many such occasions, but today the ball was submitting to his will. Immediately after returning to bowl the third over, Vinay got Jay Bista in a fashion identical to Shaw’s dismissal. If the previous two balls had seamed away, the one that got rid of Akash Parkar — promoted ahead of Mumbai’s specialist middle-order batsmen — came in and rapped him on the pad in front. It was the second hat-trick of Vinay’s career, and in doing so he came only the fourth bowler in Ranji history to repeat the feat.

He would take three more wickets on the day to help Karnataka dismiss 41-time champions Mumbai for a mere 173. In reply, they were 115/1 with Mayank Agarwal unbeaten on 62.

Vinay, nowadays, operates as an impact bowler. He picks and chooses his moments. It’s evident from his numbers as well. This year he has taken 20 wickets, but he has bowled only 127 overs. Among the bowlers with at least 20 wickets, only Ishant Sharma has sent down fewer (116). Vinay’s corresponding numbers last year were 149.5 overs and 29 wickets — the least number of overs among the bowlers with 25-plus wickets.

He has taken this approach consciously, with an eye on self-preservation. Vinay knows that the body clock is ticking. Rather than doing the hard yards all day, he prefers to go all out in short bursts. A selectorial snub also nudged him into changing his bowling philosophy. In an interview with The Indian Express last year, after he had overtaken Madan Lal as the fast bowler with most number of wickets in the Ranji Trophy, Vinay shared that the Indian selectors overlooking him despite a 55-wicket 2014-15 season had forced him to recalibrate.

“I was always a stump-to-stump bowler. My strengths were line-and-length, swing and in-cutters. But what happened in the 2014 Irani Trophy and thereafter changed my outlook completely. I took 10 wickets in that match. All the selectors were there and everyone watched the game. Two limited-over Indian teams were to be selected shortly after the match. I thought I had done enough. But when the list came, my name wasn’t there in either of them. I felt so bad I can’t explain. Then I thought, maybe I need to change myself. I have realised that stump-to-stump gets you wickets, yes, but more than the wickets I want to change the perception about me, what they think about me,” Vinay said.

So he reset his aim. It wasn’t the off-stump anymore but the batsman’s head. And not at a harmless 118-120 kph, but in the 133-135 kph range. “I have added two three yards of pace to my bowling. And I don’t want to bowl fast from good length. I bowl bouncers. When you do it from short of a length, when you make the batsmen hop and jump, get them to knick off their gloves, then people say he is fast. Nowadays, I want to just bowl there, bowl there and bowl there. I want to hit the batsman’s head.”

Consequently, rather than spreading his energy evenly over a season in pursuit of 50 wickets, he now tries to pour all his malice in one ball, one short spell.

“It’s not just simply coming and bowling a whole lot of overs and taking 50 wickets. I want to come out as a different Vinay Kumar. I have had enough of, ‘Oh Vinay Kumar! He is a very good swing bowler’.”

To add pace and slow down ageing, Vinay nowadays spends extra hours in the gym. “Now I feel young. I am approaching mid-thirties. But I feel 28-29. And it has helped my cricket, it has increased my pace and effectiveness.”

All this is to woo the national selectors once more. Vinay isn’t in the reckoning, but the flame to represent the country once more burns undimmed. His 376 Ranji scalps and 438 First Class ones don’t give him satisfaction. Milestones, in a way, are millstones around his neck.

A reminder that he is taking all those wickets in the Ranji Trophy because someone better than him is playing in the Indian team. Vinay will happily exchange places.

“People will ask why am I changing myself? Because I see there is strong competition in the Indian team. I see what they are doing and why they are doing. They are… different, and if I need to be there. If I am happy to play Ranji and be called an ex-Indian cricketer, then I have done enough and I should just relax, but I am not that kind of person. I will happily give away fifty or 100 Ranji wickets to get one more crack at international cricket.”