Pakistan vs England T20 World Cup 2022: ENG beat PAK at the MCG in the final. 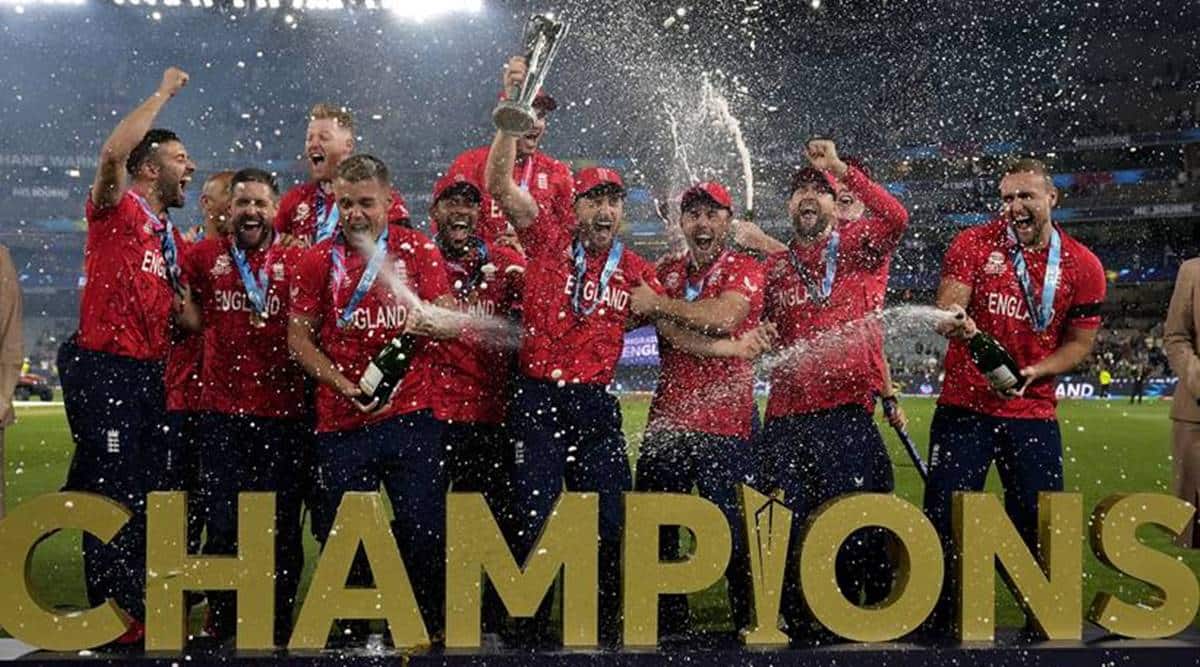 England players celebrate with the winners trophy after their win against Pakistan in the final of the T20 World Cup cricket at the Melbourne Cricket Ground in Melbourne, Australia, Sunday, Nov. 13, 2022. (AP Photo/Mark Baker)

Pakistan vs England, T20 World Cup Final 2022:Ben Stokes held his nerve with an unbeaten half-century as England claimed their second Twenty20 World Cup title with a five-wicket win over Pakistan at the Melbourne Cricket Ground on Sunday. Thirty years after losing the 50-over World Cup final to Pakistan at the MCG, England turned the tables on the south Asians with brilliant death bowling and with Stokes finishing on 52 not out in a chase of 138 for victory.

Earlier. England won the toss and decided to field first in the T20 World Cup final against Pakistan at the Melbourne Cricket Ground on Sunday. Both teams were unchanged from their semi-finals. Pakistan registered 137 in their quota of 20 overs.

PAK vs ENG: Moeen on the mic

Moeen Ali: "This is one of my best days of cricketing career. I feel as a team we deserved it, over a long period of time we have played some amazing cricket, obviously fell short but the semis and then today to win against a brilliant Pakistan side is an amazing feeling, especially in front of fans and family. It was just about keeping my intent, if I get out I get out, being positive and it was the right balance to Stokesy, he played some great shots and put in a crucial partnership."

Ben Stokes: "In finals especially when chasing.. you probably forget all the hard work before that, how we bowled, Adil Rashid and Sam Curran won us the game. It was a tricky wicket and one that you never felt in, so to restrict them to 130-odd bowlers have to take a lot of credit for that. With that (defeat to Ireland) being so early in the competition we obviously had to address it, say what had to be said and then let it go. In tournaments like these you can't carry baggage with you, that was a little blip on the way, credit to Ireland for turning up and beating us, but the best teams learn from their mistakes and not let it affect them. Pretty good evening. Representing your country in World Cups is amazing.. but it has been a good one."

PAK vs ENG: England, the first

PAK vs ENG: Player of the tournament in T20 World Cups

England lift the trophy and the fireworks are on at the Big G!

PAK vs ENG: Winning captain on the mic

Jos Buttler: "It is. To win the T20 World Cup now, really proud of everyone here. It's been a fantastic tournament. We went to Pakistan before coming here, which was a valuable time for the group. he has fitted in really well. We have got a few Australians in the coaching staff. Huge swing in the game, fantastic over from Adil. Has been outstanding for us in the last three games, just the guy who makes things happen. When you hit a length there is some movement. We managed to get away to a start but it wasn't easy."

PAK vs ENG: Babar on the mic

Babar Azam: "Congratulations to England, they fought well. We felt like home here, got great support at every venue. Thanks for your support. I just told the boys to play our natural game, but we fell 20 runs short and the boys fought well with the ball. Our bowling is one of the best attacks in the world. Unfortunately Shaheen's injury put us off, but that's part of the game."

Curran: "I don't think I should be getting this, I think Ben Stokes should get this (PoTM.). Big square boundaries, so I knew my into the wicket bowling would work with big boundaries. I mixed it up with slower balls to make it tough for the batter. Incredibly special. We all look upto him. People question him but he's incredible. Azaming crowd. I wanted to be adaptable coming into the tournament. I haven't bowled much at the death before. Needed to be good with the bat too. How good is it to be a World Champ (smiles)."

Sriram Veera: As soon as he hit, Ben Stokes started to backpedal, roar, and kept roaring till first Livingstone hugged him. And then the rest of his team-mates. Perhaps, no other contemporary cricketer seizes big moments like him. He is imprinted in all the biggies. The 2019 World Cup final. Even when he was sprawled on the ground, the ball ricocheting off his bat, became the image. The Ashes when he couldn’t even see his partner Jack Leach bat, hunched as he was at the non-striker covering his eyes. And then that gobsmacking smack off Pat Cummins. And now, in another World Cup, he has caught hold of the big moment and pocketed it with steel and ambition. Even in that last over that England lost in Kolkata, it was him with the bowling but where it could have scarred a lesser mortal, he has wiped it off like only he can. We know the backstory: the pub fight that threatened his career, the death of his father, the mental-health struggle, the Test captaincy recharge with Brendon McCullum, the ODI World Cup star, and now the T20 World Cup star.

Devendra Pandey: Ben Stokes is like a premium stock, one should buy it on the dip. Stokes was slow, wasn’t connecting like he should but till he was there, even if not getting the best at the World Cup, the team knew he would return in the long run. He held his nerves and like a good stock, picked at the right moment when he slammed Iftikhar Ahmed six and a four. Before the over he was batting on 29 off 36 balls. And by the time Ahmed concluded his over, his score jumped to 39 off 38 balls. Good Stokes always work.

PAK vs ENG: Fifty for Stokes, England are winners!
And that does it. A first T20I fifty for Ben Stokes and he has finished things off for England at the Big G. The 2010 champions are crowned champions in 2022 as well!
Screengrab: Hotstar PAK vs ENG: Stokes does a Stokes...Ian Smith is Ian Smith

Sriram Veera: With 38 runs needed off 26 balls, Ben Stokes did a Virat Kohli: two successive boundaries under immense pressure. Going by his own career, we can say he did a Stokes. Nerveless, ambitious, and one who trusts his own game. Against him was Shadab Khan, a very good leggie. First ball, Stokes backed away to slam it to long-off boundary. Nasser Hussain started to turn into a Bill Lawry on air. The next was a thriller: Stokes backed away, Shadab held his nerve and for a long time, it seemed he had his man. Stokes had heaved it on the up and the white ball seemingly hung in the air. The long-on fielder jumped but grasped thin air. Stokes, and England were away. “What about this bloke Stokes. What about big occasion? Staggering,” Ian Smith as ever with the pithily insightful cries that would stay in the mind for long.
When he came to the World Cup, he hadn’t played a T20 game in 18 months. Buttler sat him down for a chat to tell him what his role was. Perhaps he said, we will be stuck in a hole in two pressure must-win games, against Sri Lanka and then in the final. You do your thing. For that’s what Stokes has done. Moeen Ali goes big in the 17th over. Three boundaries for him off it. 16 runs come. England need 12 off the last 18 balls. DLS par score, are we even talking about this now, was 111.

Sriram Veera: No other wicketkeeper in the world appeals for everything as much as the excitable Mohammad Rizwan. If the ball has come to him, it’s out. Even though he himself might later suggest, as he did to Haris Rauf in the 15th over, that he can’t hear anything. But first the hands will go up.
He wasn’t even a natural keeper when very young but decided one day that he was going to don the gloves. “When he started to become a wicketkeeper, everyone persuaded him not to bother,” his mentor Talha Ramani once told this newspaper. “But he is a stubborn man; it’s almost as if disbelief is his fuel. ‘Agar mehnat karoonga, toh log khamosh ho jayenge, bhai’ (If I work hard, people will fall silent).”
They have fallen silent alright, but he hasn’t. Appealing for everything, and then when the umpire turns it down, a lovely smile lights up his face.

PAK vs ENG: And that changes the game!

PAK vs ENG: Ouchieee, Afridi taken off!
Shaheen Afridi, who was struggling to bowl after having picked up an injury earlier, is taken off after bowling just one ball of the 16th over. Iftikhar Ahmed comes in to complete the over.
PAK vs ENG: Shadab brooks no doubt.. gets Harry

Abhishek Purohit: After playing all sorts of tricks on Harry Brook but enjoying no luck, Shadab finally got his man three balls in to the 13th over. With only five runs having accrued in the previous two overs, England were getting fidgety. And Shadab threw one up fuller and wider outside off stump, like how Yuzvendra Chahal would have surely done with the benefit of the longer boundaries, had he only been played in this World Cup. Brook threw his hands at the bait, but hit it too flat and straight to Shaheen Shah Afridi at long-off. The fielder seemed to have done his knee some damage, but it brought Pakistan another precious wicket.

PAK vs ENG: Almost another good over!
Stokes squeezes gap between extra cover and long-off to find a boundary off the last ball of Haris Rauf's over. After 15. England are 97/4. DLS par score at the stage? 98.
LOAD MORE

The build-up to the final has revolved around how Sunday’s clash is a throwback to the 1992 World Cup final at the same Melbourne Cricket Ground, where Imran Khan-led Pakistan clinched their maiden world trophy by defeating England.

The campaign of Babar Azam’s team has had shades of that vintage side’s title run. Like in 1992, nobody trusted this Pakistan team to reach the knockouts, especially after they were beaten by India and later faced embarrassment after losing to Zimbabwe.