IPL 2016: On Green Park’s debut, the spotlight is on floodlights

The standard illuminance reading at stadium during night games is expected to 1800-2000 lux. At Green Park, it is learnt, the meter has shown a reading of about 1400 to 1500 lux. 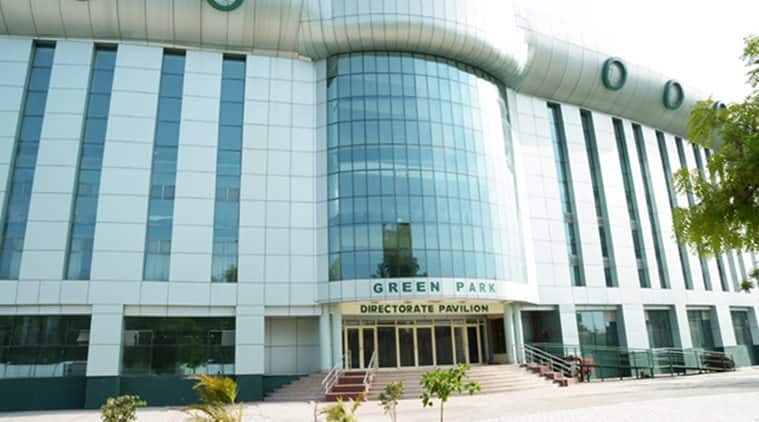 According to UP Cricket Association secretary Rajeev Shukla, though, the IPL technical committee that had come to inspect the venue a month earlier had given their clearance to the floodlights. (Source; UPCA)

When Kanpur hosts its first-ever Indian Premier League game on Thursday, the television pictures from Green Park might lack the usual clarity. There are also fears that the fielders on the fence might find it tough to spot ball in the second half of the game. The blame for these potential problem rest with the floodlights at the venue. The standard illuminance reading at stadium during night games is expected to 1800-2000 lux. At Green Park, it is learnt, the meter has shown a reading of about 1400 to 1500 lux.

“The effect of the lights near the centre should be fine but if you are fielding at long-on or for that matter near any boundary the light might not be sufficient. It will be tough for fielders, especially when it comes to taking high catches,” a senior player, who will be on field for the Gujarat Lions vs KKR game on Thursday, told The Indian Express.

According to UP Cricket Association secretary Rajeev Shukla, though, the IPL technical committee that had come to inspect the venue a month earlier had given their clearance to the floodlights.

“Inspection was done way before and the technical committee checked the lights. Everything was perfect. I don’t think there will be any problem for players while playing under lights. Kanpur has been a historic venue and we are hoping for these two games to be a major success,” Shukla, who is also IPL chairman, informed this paper.

The UP government owned Green Park Stadium, two years back, came up with a plan to build a new stand with a special VVIP box. The state government went ahead with its plan but overlooked a basic problem. The new VVIP box, called the ‘Director Stand’, today stands between one of the floodlight towers and the playing arena. However, once the problem was detected, the UPCA installed additional lights on the floors of the stand. Though, as the players say, the stadium isn’t sufficiently lighted.

Floodlights aren’t the only concern at the stadium. The lack of five star hotels in Kanpur has ensured that Mumbai Indians at least are staying in Lucknow and holding their practice sessions at KD Singh Babu Stadium for the last two days. Mumbai are expected to come to Kanpur only once the Lions are done with their match against KKR.

Meanwhile, ‘Landmark’ the one quality hotel in Kanpur has seen 75 of its 100 rooms being booked by either UPCA or the Gujarat franchise.

Kanpur: Meanwhile, skipper Suresh Raina’s return could not have been better-timed as Gujarat Lions, jolted by the tournament’s biggest ever defeat, seek to revive their campaign against Kolkata.

The Knight Riders will be handicapped by the absence of in-from all-rounder Andre Russell, and Gujarat Lions will look to capitalise on the void at the Green Park, which will be hosting its first-ever IPL match. The 28-year-old limped off the field midway through their match against Royal Challengers Bangalore with a suspected injury to his left leg and did not travel with the squad that reached the city last evening.

In the pecking order, KKR are placed in second position with 14 points and a good positive net run rate, despite being humbled by Royal Challengers Bangalore by nine wickets in their last match. Lions, too, were humiliated by RCB, experiencing a 144-run defeat last Saturday.

Blazing centuries from AB de Villiers and Virat Kohli left the Lions attack bruised and battered, and a shaken batting line-up was sent packing for 104 runs.

The time has come for Lions to regroup and the presence of Raina, who missed his first-ever IPL game since the inaugural edition in 2008 because of the birth of his first child, could work in their favour. PTI

When I saw grace, class, perfection in Kohli: Harsha Bhogle