On Tuesday, Tyagi, a farmer’s son from Hapur, played a leading role taking four Australian wickets to pave the way for a 74-run victory and India’s passage to the U-19 World Cup semifinals. 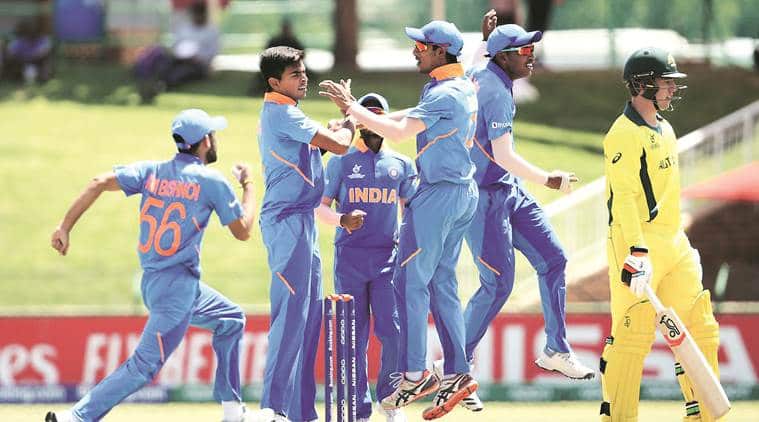 Kartik Tyagi accounted for No.3 to No.6 in the Australian batting order as India defended 233. (ICC)

Praveen Kumar recalls the day three years ago when acclaimed Meerut coach Vipin Vats, who had groomed him and Bhuvneshwar Kumar, asked him to see a lanky 16-year old boy bowl in the nets at Victoria Park. Kumar remembers Kartik Tyagi’s long run-up, the high-arm action, and the ability to consistently beat the batsmen.

On Tuesday, Tyagi, a farmer’s son from Hapur, played a leading role taking four Australian wickets to pave the way for a 74-run victory and India’s passage to the U-19 World Cup semifinals.

He prised out two top-order wickets off successive balls in the first over after a run-out to derail the chase and the young Aussies never recovered from that triple strike. Interestingly, India’s bowling hero had never wanted to be a bowler. His heart was set on becoming a batsman, an opener at that.

At 12, he joined Vats’s cricket camp. “There were many batsmen awaiting their turn in the nets, and the coach told me, ‘bowling daal’ and that’s how I became a bowler,” Tyagi had told The Indian Express before leaving for the World Cup in South Africa.

However, it wasn’t just a decision to relieve the boredom of a kid; Vats believed the boy had innate talent. “Firstly, he was tall, and then he had a good high-arm action. Fifty per cent of the work was complete there itself – at that talent-identifying stage. As a coach, it’s my responsibility to set the career path of each player. I felt that Tyagi was most suited to become a bowler.”

Around that time, Praveen called Suresh Raina, who was Uttar Pradesh captain then, and raved about Tyagi. “On a flat track, he was at another level from other bowlers. He was swinging the ball at will and with pace. I felt yeh ladka bheed mein na gum ho jaye. (hope this boy doesn’t get lost in the crowd). That’s why I called Raina.”

Soon, Tyagi was representing the state in the Buchi Babu tournament in Chennai and not long after, Raina handed him a Ranji Trophy debut. Rahul Dravid was impressed with what he saw in the boy and the teenager revelled in the vote of confidence. However, trouble intervened soon. A stress fracture put him out of cricket for a year. It was felt that he had height but not enough muscle and core strength. Vats felt fast bowlers needed strong legs and a durable build to take the punishing load.

The injury also led to financial issues; his father had to borrow money for the treatment. “It was a struggling time, Papa had to borrow money, the money which he is still repaying. You know the state of farming, kaisa haal hai. He never told me how much money he took and how much is still pending, but it was a tough time for sure. He wanted me to become a cricketer and was ready to do anything for it,” Tyagi recalled on the day he was picked for Rs 1.3 crore by Rajasthan Royals. Before he left for South Africa, Vats told him to consult Dravid on how to bowl in South African conditions. On Tuesday, Tyagi certainly proved all his backers right.