Aravind's contributions haven't quite been statistically striking but he has handed his team the early momentum by drawing first blood. 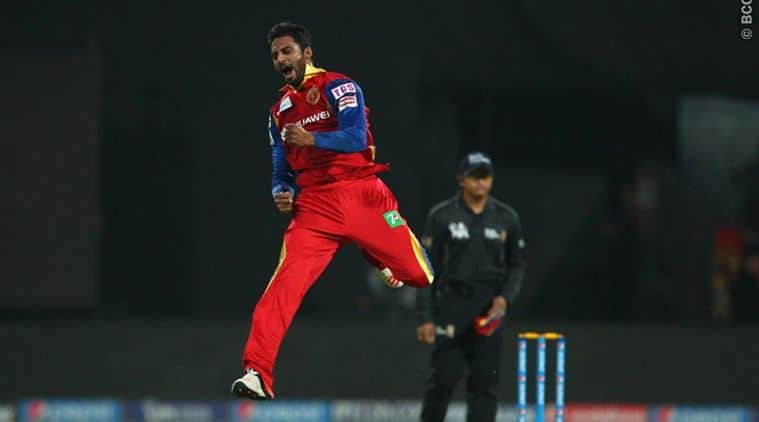 Aravind has struck in his first over in four of the last five matches. (Source: BCCI/IPL)

WHEN SREENATH Aravind laced up for only his third game in IPL 9 on May 11, Royal Challengers Bangalore (RCB) were languishing at No.6 on the table, needing to win all their remaining matches. He was yet to appear in two consecutive matches. In four of the five matches from that point on as RCB incredibly raced to the playoffs, the gangly left-armer picked up a wicket in his first over. Neither Aravind nor RCB have looked back ever since — though they did go down to Mumbai Indians on that night before commencing their unbeaten run.

While all the focus on RCB’s meteoric rise from the bottom of the pile to become the first team to qualify for the final has revolved around the batting exploits of Virat Kohli and AB de Villiers, Aravind has emerged quietly as their trump-card with new-ball in hand. In that period he’s snared seven wickets at 19.71 apiece.

It’s not been what you’d call a customary season for RCB where their batsmen would dominate and their bowlers would make up for that dominance by establishing little or no control over the opposition. Yes, their batsmen led by Kohli and de Villiers have indomitably held sway like never before in IPL 9 but for once they have had two bowlers in Shane Watson and Yuzvendra Chahal—with 20 wickets apiece—playing equally significant roles in their team’s victories. Not to forget that RCB were the team who broke the trend of teams chasing and winning in the first quarter of the season.

Aravind’s contributions haven’t quite been statistically striking but he has handed his team the early momentum by drawing first blood, quite literally, and accumulated a record that even Daryl Tuffey, the former Kiwi pacer who made a career out of first-over dismissals would be proud of. And his victims have included some influential opposition batsmen in Parthiv Patel, Dwayne Smith, Murali Vijay and Rishabh Pant, batsmen who could have taken the game away from RCB. His economy-rate in the powerplay too has been remarkable. Against Kings XI Punjab, after removing Vijay with his fourth delivery—bowled while trying to attempt a hoick—he had Hashim Amla mis-timing a drive to mid-off in his next over.

There’s nothing flashy about Aravind or his bowling. He’s probably the most un-RCB player on their roster. If anything, he looks like your typical IT professional from Bangalore and comes across as unassuming as one too — certainly not like someone you would imagine rubbing shoulders with Chris Gayle or Kohli. As it turns out, he’s never an active or visible member of RCB’s incessant off-field festivities and you somehow aren’t surprised.

This is not the first time he’s led the way for his team with the ball though. In 2011, the last time RCB reached the final, he was their leading wicket-taker with 21 scalps. That performance even won him a call-up to the Indian squad that year, and if not for an ill-timed injury he wouldn’t have had to wait till October 2015 to make his international debut. But he’s wheeled away for Karnataka in all formats, perennially being among the wickets season after season. It’s not surprising then that Aravind, now 32, as recently as last year was considered the best left-arm pace option in T20 cricket by the Indian selectors before Barinder Sran broke onto the scene.

Pace or swing have never played a significant part of Aravind’s arsenal. He knocks his victims down in gentler fashion. His hallmarks have been his consistency in hitting the right lengths with the new-ball and moving it off the surface. His dismissal of Pant in the do-or-die encounter against Delhi Daredevils was the perfect example. It was a length delivery that kissed the surface and left the left-hander slightly to catch his outside-edge.

That Vijay and Smith both fell trying to hit him out of the park in just his first over is understandable. It’s got as much to do with the speed at which Aravind sends the ball across—which tempts the batsman into swinging their bat with violent intentions—as the seemingly innocuous nature of his deliveries. If every ball that Mustafizur Rahman bowls seem to have a trick up their sleeve, Aravind’s offerings are a lot more straightforward. What you see is what you get, like most things about him, but it doesn’t always result in easy pickings as we’ve seen.

Against Gujarat Lions in the first qualifier on Tuesday, he was up against it with Brendon McCullum and Aaron Finch opening the batting. These were two batsmen where at Aravind’s pace he had no margin for error. Miss his length, and the ball was sure to fly into the far reaches of the Chinnaswamy Stadium. But while it was Iqbal Abdulla who got rid of them, Aravind was at his accurate best, conceding just 3 runs in his two overs of his opening spell. He did so by consistently landing the ball back of a length and angling it away from the right-handers with no let-ups.

His impact for his team hasn’t been restricted solely to the new-ball though this time around. Twice since turning the corner both for himself and his team, Aravind has bowled the critical 14th and 16th overs of the innings—that in between phase when batsmen are just warming-up for the big finish—and he’s delivered exactly what Kohli’s wanted of him.

Against KKR at the Eden Gardens, he was taken for 20 in his first two overs, and by the time he was brought back, Manish Pandey had raced away to a brisk half-century and looked primed to cut loose. Aravind didn’t seem fazed though. He stuck to his guns, and sized up Pandey’s intentions as he began making room for himself, and followed him with the angle. Cramped by the angle, Pandey instead looked to whip him over the on-side but was in no position, and could only hole out to de Villiers at long-on. In his next over, Aravind had Suryakumar Yadav caught in the outfield with a similar delivery.

He didn’t get any wickets during his second spell against Delhi but with the Daredevils desperate for quick runs, Aravind gave away only 13 runs in two overs, which included just one boundary.

And come Sunday, while all the pre-match predictions will revolve around Kohli, de Villiers, Chahal and Watson, the one assurety that RCB will bank on is Aravind handing them the impetus early in the contest with hopefully another first-round KO with the ball.