The team dinner will round off a memorable Super 12 campaign, and another team dinner right after the famous Pakistan win, seems like light years ago. 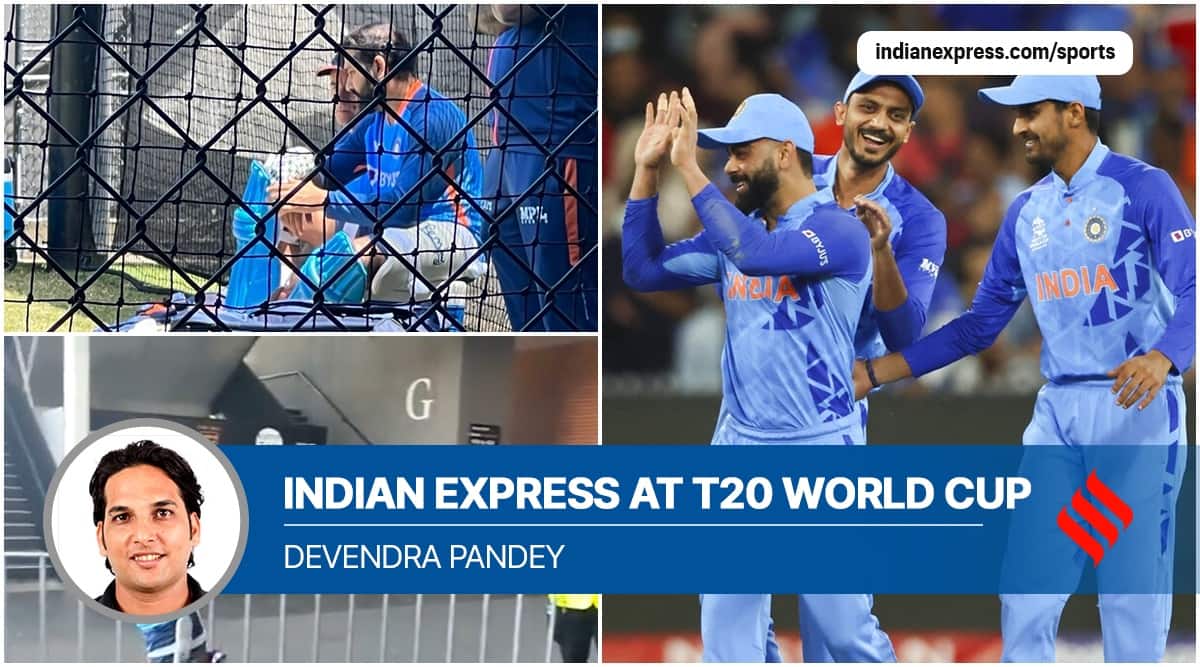 Indian captain Rohit Sharma had an injury scare in the nets on Tuesday ahead of the semi-final against England at the Adelaide Oval. (Pics: Devendra Pandey/AP)

The Indian support staff ended their day on a bright sunshine note and then a team dinner was planned at an Adelaide hotel which is owned by an Indian. Given that the next few days will witness a growing of anticipation and anxiety as the KO-stage beckons, Tuesday was perhaps the last night when they could afford a downtime meal and some bonding over a relaxed sit-down dinner as a group ahead of the England fixture.

The team dinner will round off a memorable Super 12 campaign, and another team dinner right after the famous Pakistan win, seems like light years ago. Soon after that famous win, the team had flown off to Sydney, having kicked off Diwali for all their fans with the heroics on the field.

But the team itself had spent some time arriving at a consensus: for where to have their grand Diwali dinner. The entire tour party, including wives and children of a few players, had dinner at the Sydney Harbour. For dessert that night was coach Rahul Dravid’s typical palate cleanser — the seniors conveying to the team that they shouldn’t get carried away with the thrilling win in the opening game and stay in the present.

Another team dinner. And one suspects Dravid will offer the team coffee shots, to stay alert and ears pricked, the next few days.

Rohit injury scare, but all well

Indian captain Rohit Sharma had an injury scare in the nets on Tuesday ahead of the semi-final against England at the Adelaide Oval. Sharma was taking throw-downs from the specialist S Raghu when he got hit on the right forearm. Sharma threw his bat down in pain and was quickly attended to by the team physio Kamlesh Jain, who was near the end of practice area, and the team doctor Charles Minz. An ice-pack was administered as Rohit sat on a chair for a while.

#RohitSharma𓃵 #INDvENG #T20WorldCup
The team physio Kamlesh Jain and team doctor Charles Minz rushed to attend to the Indian captain who was later given ice pack by the physio. Rohit sat on a chair by the sidelines for a while.
📹 @pdevendra pic.twitter.com/0gIYndzsEf

The support staff looked worried and the batting coach Vikram Rathour too came to inspect the injury.

After 40 minutes, Sharma decided to bat again. Dayanand Garani, another throw-down specialist, began to throw, off his hand. Sharma faced a few balls and asked him to use the zippier stick – the ball-throwing equipment – instead. He didn’t feel pain and India’s scary moment had faded away.

#INDvENG #T20WorldCup #RohitSharma𓃵 returns from nets at Adelaide on Tuesday. He was hit on his hand during the practice session. After a brief break, the Indian skipper resumes batting.
📹 @pdevendra pic.twitter.com/6T5jIa7HWJ

Not the throwdowns captain wanted?

As Sharma was batting facing Garani, he suddenly realised Raghu was missing from the nets when he asked where Raghu was.

When Dinesh Karthik walked in, in the adjacent nets, Sharma told him how Raghu had erred in bowling a first-ball yorker and followed it up with a short ball which zipped in. But Sharma had wanted back-of-length balls.

After a short while, when Raghu walked in, Karthik cheered him up, as did a few other players.

Rohit asked Raghu to bowl further up, “aur upar daal.” On every throwdown, Raghu looked apologetic. Sharma batted for another 30 minutes. When he walked back, the security in-charge asked him if he was okay and Sharma replied it was a “bit scary”.

The support staff later laughed off the incident. Mhambrey could be heard telling Raghu, “Tu baraabar ab aage daal sakta hai. Ab kaise aage daala, ab short nahi dalega na?” (You can now pitch them up just like you did now (in the latest stint to Rohit). Don’t bowl short for now.)