India vs England, Day 2 Highlights: India 107 all out on a rainy Day 2 at Lord’s

India vs England 2nd Test Day 2 Highlights: A day that was eventless for most of it but exploded to life in the final session. India lost both their openers and Cheteshwar Pujara to a clumsy run out in the sparse overs that were played in the first two sessions of the day. The England pacers, led by James Anderson’s fifer, then sliced through the Indian batting line up. The Indian bowlers have their work cut out for them on Day 3.

England won't be batting today. It was first the rains that dominated and then the hosts. They will begin their innings on Day 3. Not more than 12 overs could be bowled in the first two sessions and even lesser than that in the first but England just kept chipping away at India. Virat Kohli could not bail out the visitors this time and their bowlers now have their jobs cut out.

Anderson gets Ishant Sharma LBW and brings up his fifth wicket of the day. That is also his 99th wicket at Lord's. England have ripped India apart and it remains to be seen whether they will bat today or not. One gets the feeling that if it wasn't for those dropped catches, Chris Woakes would have possibly got a five-wicket haul. He has to settle for three.

Two wild slashes from Shami's willow and the ball races away to the boundary on both occassions. Those runs help India cross the 100-run mark.

Another one, another unsuccessful review. We might see England bat today.

Kuldeep reviews it for the sake of it. He was plumb and a  replay is not really required to determine that. He tries the flick and competely misses it.

And finally Rahane joins the nick-wagon. Anderson loops it away and Rahane reaches for it, Cook follows the ball all the way and makes no mistake with the catc. Sharp work from the former England captain, India's batting order no more than a ticking bomb.

Ashwin tries to push it off his leg and it ends up ballooning in the air. Should have been a simple catch for Rashid mid-on except that he lost the ball completely in the air and spots it only after it falls to the ground.

Rahane managed to get a four off a delivery on his pads by Curran in that over. Ashwin has come in to replace Pandya. The ball is acting like a boomerang for the moment.

The ball pitched outside off and swings all the way back in and Karthik can't even get near it. The off stump is rattled and India lose their sixth. Karthik goes for 1.

Woakes again! Pandya nicked twice on the bounce to slips, Buttler dropped it the first time and it went to the boundary, the second time it was straight to him and he made no mistake. That first delivery moved away from the right hander, this one moved right back in. Woakes is on fire right now. India in all kinds of trouble.

Woakes tormented Kohli before his wicket fell. The first ball Kohli faced straightened on to the off stump and the Indian captain played it to backward point.The next was the delivery that Kohli tried to leave but ended up nicking it to slips. Whether it was a chance for Buttler or Cook is debatable but the ball went through for four runs anyhow. After that came the fatal blow.

If ever there was a chance to prove his mettle in Test cricket, this is it. Pandya walks out with India tottering at 49/4. He survives the final two balls bowled by Woakes.

Woakes has been threatening with every single delivery. Kohli had nicked it to slips the last time and that had run off to the boundary. This time not so lucky. Ball swings away in the last second to take an outside edge off the Indian captain Buttler makes no mistake with the catch.

Woakes had got an outside off Kohli that fell just short of second slip. Sam Curran was brought into the attack after that and India managed to take five runs off that over, four off which belonged to Rahane.

And he faces Ajinkya Rahane. The over goes for a maiden. The ball is currently doing all sorts of things. Thus far, Rahane and Kohli are doing well to negotiate the movement.

Anderson relentless line had Kohli pulling his bat ever so closer to his body. There is a reason why more than half of England players are staning behind the batsman. Kohli survives.

An rather exaggerated reach from Kohli against Anderson outside off and just about beats the edge. Anderson then bowls another whistles past Kohli's edge. The Indian captain has a smile on his face and the crowd gets into it. Kohli safely leaves the rest.

Full delivery from Broad and Rahane reaches for it, the nick carries to Root at fourth slip and he drops it. England's slip catching woes continue.

Anderson's first delivery si a bit too full and Kohli pounces on it. Places it brilliantly through covers for four to start off the over. Five dot balls later, Kohli pressed forward to try and defend, the ball caught an inside edge and ran behind. They run two runs.

Rahane faces Broad first up and survives three balls. Important to note that, considering how India's batsmen have performed thus far in this match. 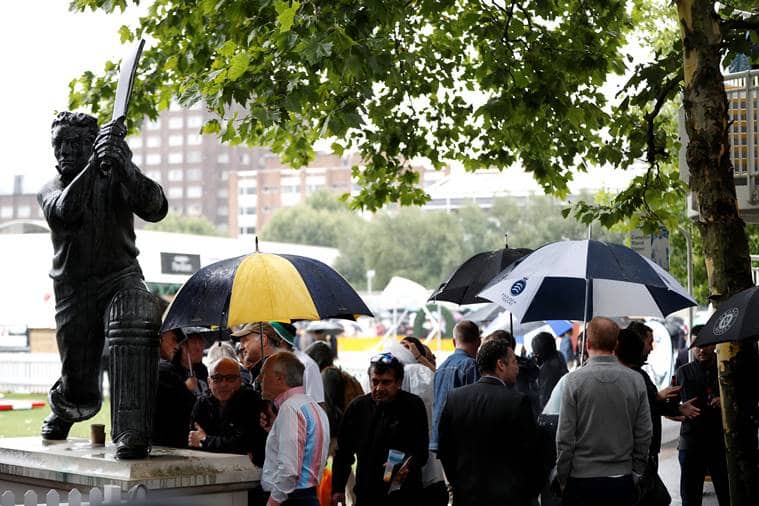 India vs England Live Cricket Score 2nd Test Day 2 Live Streaming: Frustrating the two teams, incessant rain washed out the entire day one of the second cricket Test between India and England at Lord’s on Thursday. The play was called off at 4.50 pm local time without a single ball being bowled. The match officials decided to take an early lunch, moving the scheduled break ahead by 30 minutes. Even after lunch, there was no respite from the rain and it went on throughout the afternoon. Finally, 45 minutes after the ‘tea break’, the umpires inspected conditions twice before declaring no play was possible on Thursday. The remaining four days will see 96 overs each to make up for the lost time. However, there is more rain forecast for this weekend and as such this match could see routine rain breaks.