India U19 vs Australia U19, World Cup 2020 Highlights: India beat Australia by 74 runs, advance to semis

India U19 vs Australia U19 World Cup 2020 Highlights:Kartik Tyagi and Akash Singh scalped four and three wickets each to help India beat Australia by 74 runs at the Senwes Park in Potchefstroom on Tuesday.

India U19 vs Australia U19, World Cup 2020 Highlights: Leading the attack with the ball, Kartik Tyagi and Akash Singh scalped four and three wickets each to help India beat Australia by 74 runs at the Senwes Park in Potchefstroom on Tuesday. While Tyagi ripped apart the Australian top-order, Singh took the crucial wicket of Sam Fanning and helped the Men In Blue wrap the Australian tail inside 44 overs.

Chasing 234, Australia started off on a dreadful note as they lost four early wickets. Opener Jake Fraser-McGurk returned to the pavilion in the first delivery of the Australian inning without facing a single ball and Tyagi followed it up by picking two more wickets in the same over. He then went on to dismiss wicket-keeper batsman Patrick Rowe in his fourth over.

Akash dislodged the Australian tail after dismissing Fanning on 75, as they lost three wickets in consecutive deliveries in the 42nd over. He then followed it up by packing Matthew Willians on 2, as Australia were bundled out on 159 in 43.3 overs

Earlier in the day, and unbeaten 54-ball 55 by Atharva Ankolekar and Yashasvi Jaiswal’s patience at the top helped India post 233/9 at the end of 50 overs. The Rajasthan Royals pick Jaiswal was dismissed on 62(82) by Tanveer Sangha and his innings included four boundaries and two maximums.

India will now take on the winners of the quarterfinal match between Afghanistan or Pakistan in the semi-finals.

Incredible bowling effort by Akash Singh helps India wrap the Australia tail inside 44 overs, as the Aussies are bundled out on 159. Another convincing win for the defending champions as they head to the final four, where they will meet the winners of the match between Pakistan and Afghanistan.

Three wickets in three deliveries leave Australia in tatters, first it was Sam Fanning and then Connor Sully who is run-out while trying to sneak a single. The next delivery is followed by Todd Murphy's wicket as he is cleaned up by Akash Singh on a golden duck. AUS: 155/9 (41.5 overs)

This is a huge wicket for India as Sam Fanning's resistance finally comes to an end. He departs after scoring 75 from 127 balls. It was a loose delivery going down the leg and Fanning tried to seek a boundary from it. He pulls it towards the fine-leg region but the ball hits his gloves and is collected brilliantly by Dhruv Jurel. AUS: 155/7 (41.3 overs) | need 79 runs in 51 balls

Ravi Bishnoi is delighted and so is Team India as the 81-run partnership between Sam Fanning and Liam Scott finally comes to an end. It was a wide delivery with very little spin and Scott goes for the late cut but ends up getting a faint edge, which is collected sharply by Dhruv Jurel behind the stumps. He departs for 35(71) as Australia need another 85 to win from 57 balls. AUS: 149/6

Quicker delivery by Atharva Ankolekar to Sam Fanning and he pushes it towards the cover region and rushes for a single. With this, the youngster also completes his first 50 of the U-19 World Cup. Australia would need another 50 from the left-handed batsman if they want to remain alive in the contest. AUS: 103/5 (32 overs) | need 131 more to win

Kartik Tyagi is reintroduced in the attack and the plan works for India as he sends Patrick Rowe packing on 21 from 40 balls. It was a length delivery pitched around the off stump and Rowe tries to defend it, however, the ball takes a thick outside-edge and settles in Dhruv Jurel gloves. This was Kartik's fourth wicket of the game. AUS: 68/5 (20.2 overs)

Sam Fanning and Patrick Rowe are really handling the job well in the middle as the pair add over 50 runs for the fifth-wicket. Fanning is batting on 29 from 74 balls, while his partner Rowe is on 21 from 38 deliveries as Australia reach 68/4 after 20 overs. They need another 166 to win in 30 overs.

Sam Fanning and Patrick Rowe on the rescue act!

Sam Fanning and Patrick Rowe try to stabilise the Australian innings after the early blows. The pair is watching the ball and are taking their time to settle, which is the need of the hour for the Aussies. Both are also fetching the odd boundaries, just to maintain the check on the asking rate and have so far added 26 from 51 balls for the fifth wicket. AUS: 43/4 (11 overs) | need 191 runs to win

Kartik Tyagi is on fire!

Kartik Tyagi is all pumped up as he picks up his third wicket. This time the batsman is caught at the first slip, but one must admit that this shot was not required at all. A wide delivery by Tyagi and Oliver Davies tries to whip the ball on the off-side, however, but plays it way too outside of his body and edges it for a simple catch to Yashasvi Jaiswal. AUS: 17/4 (2.3 overs)

What a start for India!

Australia have been crushed right at the start of their 234-run chase. They lose wickets on the first, fourth and fifth delivery in Kartik Tyagi's opening over. Slight confusion between the opening pair of Sam Fanning and Fraser-McGurk leads to the latter's dismissal, that too without facing a single delivery. The second man to go was Mackenzie Harvey, who was trapped LBW on 4. Tyagi then followed it up with a ripper, cleaning up Lachlan Hearne's stumps in the very next delivery. Australia are in deep trouble. AUS: 5/3 (1 over)

Ravi Bishnoi gone. He is run out as he puts in a desperate dive but that won't be enough. He is still short of the crease when Patrick Rowe knocks off the bails. And Ravi Bishnoi will have to depart. Ravi Bishnoi Ravi Bishnoi run out (Sam Fanning/Patrick Rowe) for 30(31) India 209/7 in 48 overs

Ravi Bishnoi and Atharva Ankolekar's gritty partnership of unbeaten 50 runs off 53 balls has taken India near 200. Both have been watchful and keeping the scoreboard ticking. INDIA 195/6 in 47 overs. Bishnoi 27, Ankolekar 26

In a bid to accelerate the run rate, India lost their sixth wicket as Corey Kelly claimed Siddhesh Veer's wicket. Veer has already struck two fours in the over and there was absolutely no need for that shot. That's inexperience for you. IND 144/6 in 38 overs

Aussies in control of the game

With Atharva Ankolekar and Sidhesh Veer at the middle, India are in dire need of a partnership to pose a decent target to Aussies. After 36 overs, India are at 133/5.

Todd Murphy gets his second wicket as Dhruv Jurel (15 off 48 balls) falls short of patience and got caught by Patrick Rowe and India are in some serious trouble here. IND 114/5 in 31.1 overs.

Tanveer Sangha hits India hard as he bowls Jaiswal out. He is bowled!! Jaiswal always wanted to be aggressive on the leggie. Big blow to India as the opener walks out for 62 off 82 balls leaving India at 102/4 in 25.1 overs

Yashasvi Jaiswal reached his much needed fifty in a style after India lost their three wickets so quickly. He smashed Murphy for a huge six. He took 73 balls to reach his 50 taking India's total to 94/3 in 23.3 overs 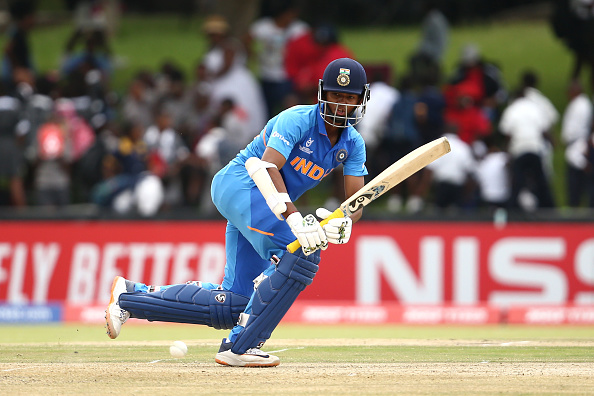 With Yashasvi Jaiswal's 39 off 61, India have reached 75/3 in 20 overs. They are in dire need of a partnership. Dhruv Jerel is also at the middle stitching 21-run partnership so far.

Corey Kelly is on fire and his delivery hits Dhruv Jurel's helmet. Though India scored a four via leg byes, physio out to attend to him, it wasn't all that serious. India 63/3 in 17 overs. Jaiswal 29 (51) and Dhruv Jurel 5 (10)

India are in deep trouble as skipper Priyam Garg departed. Connor Sully bowled Priyam Garg out. Pretty straightforward full ball it looked like, it moved back in off the seam if any. Garg played the booming on-drive and lost shape because he went hard.India lost their third wicket for 54. IND 54/3 in 15.2 overs 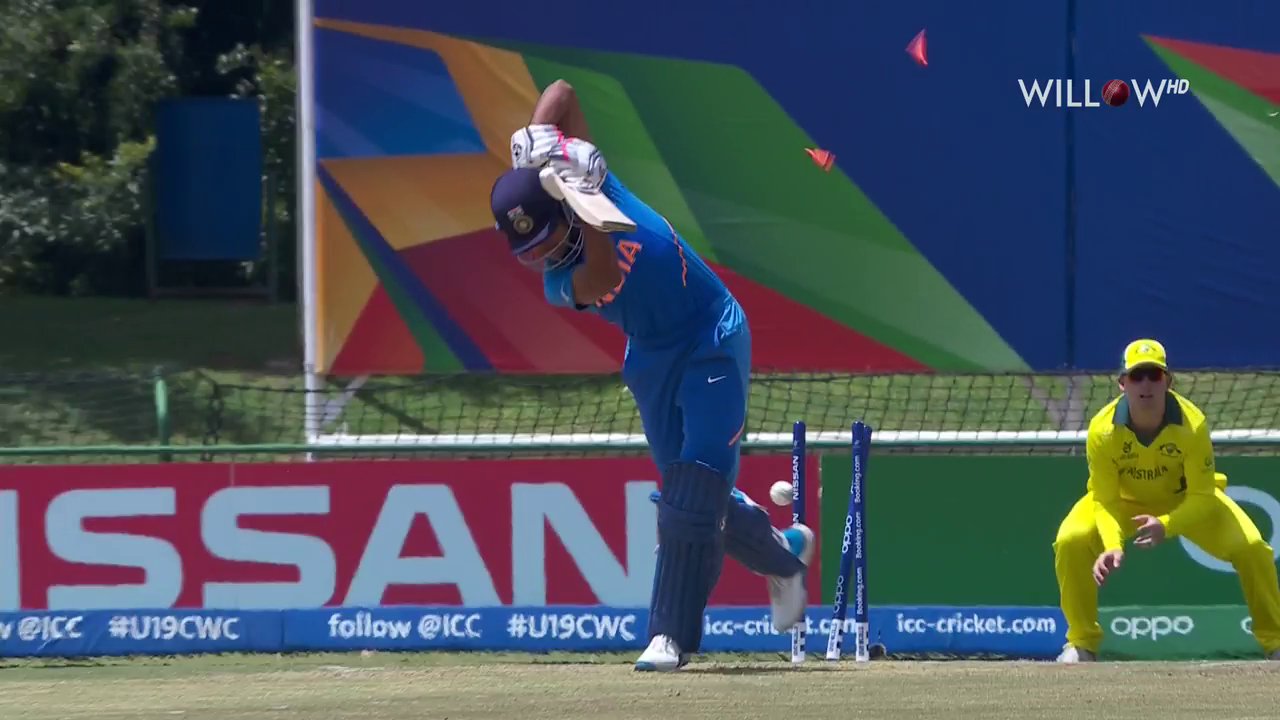 Tilak Verma departs for just 2 runs as Todd Murphy gets him out. Mackenzie Harvey takes an excellent catch at the first slip. The second shock for India. India 48/2 in 13 overs. Yashasvi Jaiswal 25 off 43 and Priyam Garg 4 off 1

Opener Divyansh fell for 14 as he's caught out by Patrick Rowe off Corey Kelly's ball. Saxena wasn't all that comfortable at the crease and he's nicked off to this short of length delivery that goes across with the angle from over the wicket and bounces extra. He fell for 14 off 26 balls. IND 35/1 in 9.5 overs

Some 👌 slip catches by the Indian cordon ahead of their Super League quarter-final against Australia.#U19CWC | #FutureStars pic.twitter.com/LP3KpabuDN

Indian openers off to a watchful start

Indian openers are watchful at the middle with Aussie bowlers are sticking to their line and length. The last time when India lost a Youth ODI against Australia was back in 2012. They have won eight out of nine Youth ODIs that they have played against them since then. IND 18/0 in 6 overs

Aussies keep it tight for Indians

Saxena gets beaten for 6 balls

Yashaswi Jaiswal hits the first six of the match on the last ball of the second over. Connor Sully's poor delivery down leg and Jaiswal picked it away over the backward square leg for six. INDIA 12/0

Yashaswi Jaiswal and Divyaansh Saxena are at the middle to open the Indian innings. Left-arm pacer Matthew Willans is bowling the first over at Senwes Park, Potchefstroom.

Here's what both skipper said at Toss

Priyam Garg: I am happy to bat first but we were looking to field. League stages were good but this is an another challenge and we are looking forward to it. No changes in our team.

Mackenzie Harvey: We will have a bowl. There might be something in it for the bowlers in the first hour and we want some early wickets so that we can expose their middle order. Our spinners have been impressive. They have been our best bowlers.

In the Super League quarter-final Australia have won the toss and will bowl first against India.#U19CWC | #INDvAUS | #FutureStars pic.twitter.com/nkPYjDRT4N

India vs Australia: U19 WC

Hello and welcome to our live coverage of Indian Under-19 team as they take on Australia in the Under-19 World Cup quarterfinals in South Africa. Stay tuned for live score and updates of the match here