Dewy outfield and an error-strewn performance by India takes the series to a decider. India lost the fourth ODI from a strong position in Mohali. 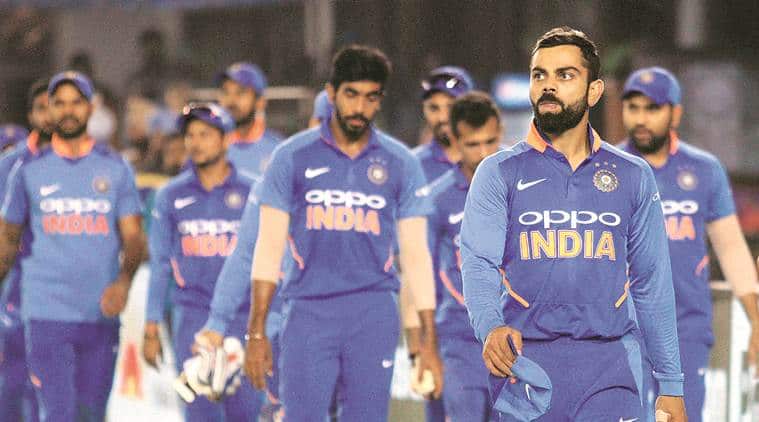 Without MS Dhoni by his side, Virat Kohli looked flustered and was bereft of ideas. (Express photo by Kamleshwar Singh)

Virat Kohli was shouting instructions at the teammates, throwing his hands up in the air in frustration and muttering under his breath while manning the rope. Anymore animated and it might have looked like a Disney movie. The match was slipping from India’s hand despite having constructed a skyscraper of a total — 358 for nine — batting first. Peter Handscomb had struck a hundred and now Ashton Turner, playing the second ODI of his career, was turning it on with clean, massive hits.

Meanwhile, as the pressure mounted, errors were piling up in the field. Full tosses, misfields, missed stumping and dropped catches — mistakes you don’t usually expect from this Indian team. Let off the hook, by Rishabh Pant off the bowling of Yuzvendra Chahal, Turner made the home team pay with a whirlwind 43-ball 84 as Australia defeated India by five wickets in the fourth ODI in Mohali on Sunday to level the five match series at 2-2. It was the highest successful chase by a visiting team on Indian soil.

While the Australians, to their credit, didn’t give in to the scoreboard pressure, despite having lost two wickets for 12 runs, it was a series of missteps that led to India’s demise. The first and perhaps most crucial of those came even before the first ball was bowled. It was when Kohli chose to bat first after winning the toss. For the second game in a row, Kohli erred in reading conditions. In Ranchi, India expected dew to be a factor when they decided to bowl first, but it didn’t happen. Here in Mohali, Kohli thought there won’t be any dew in the evening, but as he admitted later “it became too wet to bowl” once the lights came on. 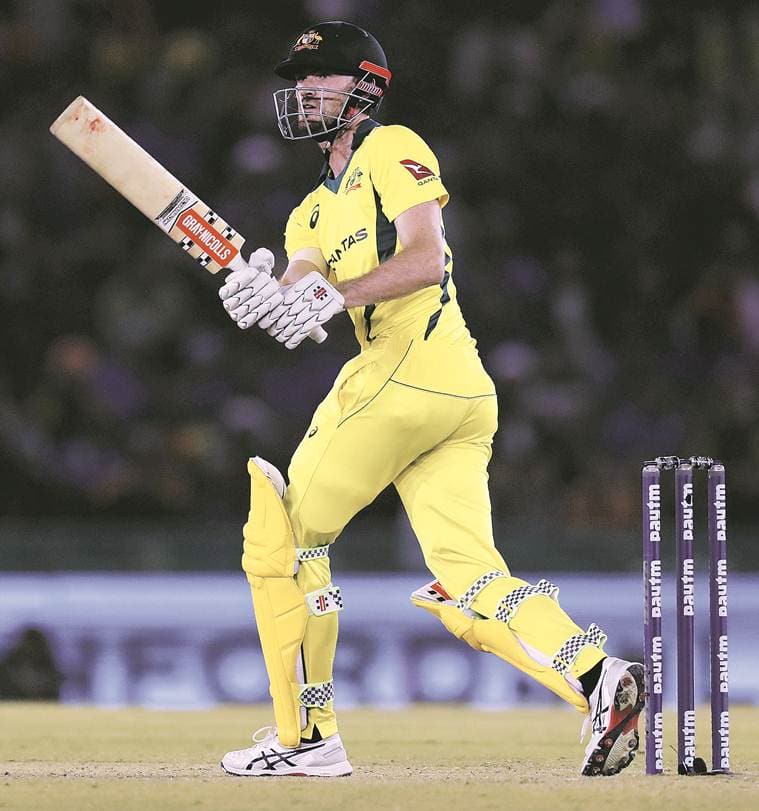 “The wicket remained good throughout the game, we have been on the wrong side of the dew twice in two games. It was very difficult to bowl in the end,” he would say later. Shikhar Dhawan added at the post-match press conference: “We thought there would be dew in Ranchi, there wasn’t. Here we thought it would the same as Ranchi, but it became very dewy.”

It’s surprising that in this day and age, the reading of the conditions can go so horribly wrong. One is not asking the Indian cricketers to play the weatherman, but all the team management needed to do was to get in touch with the curator Daljit Singh in advance and inquire if there was any dew on days before the match. After all, home teams in international cricket are known to remain connected with the ground staff.

Naturally, they were unprepared for what hit them when Australia took the game deep. The last 15 overs, as Peter Handscomb would admit, almost became T20 chase with the dice loaded against the home bowlers. And those who know Turner are aware of his finishing capabilities in T20s. The 26-year-old tall all-rounder has earned his spurs as an icy cool head and phenomenal hitter in pressure situations with the Perth Scorchers in the Big Bash League. Virat would give a limb to have such a finisher in the team.

The 46th over of the match summed up Turner’s performance. With Australia needing 42 runs off 30 balls and the match in a make-or-break situation, Kohli brought out his trump card: Jasprit Bumrah. Bumrah has dug India out of similar holes in the past. Most recently in Nagpur when he gave two runs for two wickets in the death to swing it India’s way. On the fifth ball, having run hard earlier to put the pressure on the bowler, Turner walked outside off to scoop the pacer over the fine leg boundary for a six. It deflated the Indians. Turner was particularly severe against Bhuvneshwar Kumar, who had come in for injured Mohammad Shami, smoking him for three big ones. “The guys tried their best but Ashton played one hell of a knock, Handscomb and Usman Khawaja played well too but Ashton’s innings was the game-changer,” Kohli would say.

Turner’s knock and the defeat overshadowed an important gain for India. Out-of-form opener and big tournament player Shikhar Dhawan came into his own after a five and a half month long slump. 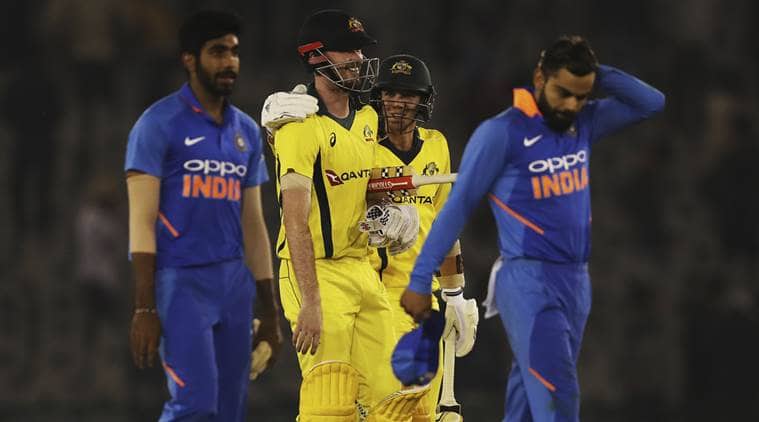 Ashton Turner smashed 84 off 43 balls to take Australia over the line. (AP Photo)

“If we know that he gets going, he can give us that solidity as it is vital to have the right-left combination going. He is a hugely valuable player for us.”

This was batting coach Sanjay Bangar after the 32-run loss in Ranchi, illustrating why the Indian team needs Dhawan despite mounting evidence that the batsman was getting sucked into a vortex of poor form just when the squad selection for the World Cup was approaching.

Before Mohali, his previous 16 innings in the fifty-over format had yielded meagre returns: 377 runs at 25.1 runs per innings. There were suggestions that he be benched in the last two game in favour of KL Rahul.

The latter, who bats right-handed, did play in the fourth game Mohali but at the No.3 position, as the team combination decided against tinkering with the opening combination of Dhawan and Rohit Sharma. It proved to be a wise decision in the end as Dhawan scored an imperious 143 off 115 balls, his highest ODI score, and Sharma, who himself was operating below his usual standards over the last couple of months, chipped in with 95 as India made hay on a sunny afternoon.

The first ball that Dhawan faced on Sunday was ‘Exhibit A’ of what Bangar suggested about the left-hand-right-hand combination. Pat Cummins, Australia’s finest bowler over the last two years, pinged one at a length. Now, it would have been an ideal, shaping away delivery for Rohit, but for Dhawan it was on his pads, begging to be put away. On cue, Dhawan swatted it away past the square leg boundary.

That set the tone of the innings as, on a belter of a wicket, Dhawan and Rohit punished the Australian bowlers whenever they strayed even marginally from their lines and lengths. After a couple of plays and misses against Jason Behrendorff initially, Dhawan settled down and unfurled his full range of strokes. There were wristy flicks and meaty pulls, carpet-scorching back foot punches and elegant leaning-into-the-shot drives. But most eye catching of the lot were his brutal bottom-handed whips, eliciting gasps from a packed a house as the ball raced away to the boundary.

“I really enjoyed timing the ball,” Dhawan said. “The wicket was really nice, and I took calculated risks. They were bowling well, and I knew I could get the runs. I was happy my smart work paid off. Of course, when you put so much of hard work, you want outcomes your way, but sometimes it doesn’t. I just think if I am doing enough, then it’s good.”

It could be said that, on a runway of a track that Mohali has become of late, none of his recent inadequacies were at play here. There was minimal movement for pacers, and insufficient turn for the spinners. That said, one can’t begrudge Dhawan for making most of the opportunity that came his way. And, very likely, these are the kind of tracks one can expect in England for the World Cup.

That then was the sole redeeming factor Kohli took back from Mohali on a forgettable night.

Bengal school takes on child marriage — with a parent’s promise