You Will Never Walk Alone: Whichever venue they stride out in the world, India’s superstar cricketers garner rousing crowd support. In most instances, they even out-number the hosts’ supporters. 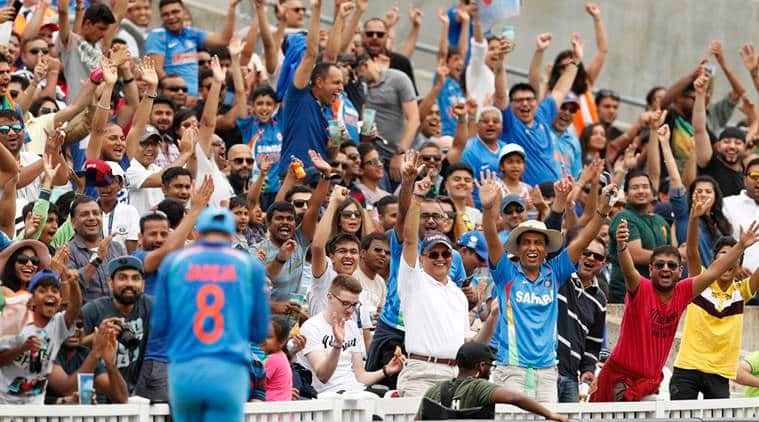 In this Instagrammable age, there is an aura around Team India, besides a sweeping fanfare that transcends geography. (Source: AP)

“I REALLY cannot understand why those born here, or who came here at a very young age like me, cannot support or follow England. Following England has got to be the way.” That was Nasser Hussain’s turn-of-the-century lament against British Asians waving the Tricolour at English stadiums. “It was like an away game because so many people supported their side,” the then England captain had said 16 years ago after a game against India. These days, no team around the world bothers about home support when the Indians are in town, especially outside the sub-continent. Where India goes, the Tricolour follows. In England and Australia, it kind of predates their arrival. Like it did at The Oval, flooding the historic venue with a mist of blue, on Sunday as Virat Kohli & Co took the field in a warm-up match against New Zealand. On Tuesday, India take on Bangladesh at the same venue for their second warm-up game. Though Bangladesh enjoys passionate support across the world, the team will always be a distant second in all popularity polls.

The overwhelming support from expatriates is old news, it’s been there since the Ajit Wadekar days. But of late, demography isn’t the only compulsion that sees India outnumbering even the locals. In this instagrammable age, there is a genuine aura around this ODI team and its superstar players. The NRI fans, who are known to scream out their patriotism on match days, enjoy a natural connect to this stubble-sporting pack led by a highly expressive captain.

The marketing men have ensured that Kohli towers over other international cricketers, even those with better batting averages or skill sets.

Kohli, larger than life
Tendulkar might have become the hero of the masses in a post-liberalised India, but no one really captures the spirit of zeitgeist of these liberalised times than India’s current captain. And young Indians across the globe have warmed up to Kohli in an epoch-defining fashion. It’s a scene that will be played out over and over again, regardless of which team India is playing over the next three weeks. Luckily for England and Hussain, they don’t have to worry about being made to feel alien in their own backyard during the league stages anyway. That too at a time when the hosts are playing the most exciting ODI cricket ever in their history.

The Champions Trophy is the start of the away campaign for the Kohli era following a lengthy and hectic home season. But they’ll be playing on pitches that are very familiar to them — England has produced faster strike rates and more 300+ totals than any other cricket centre in the world over the last two years— and amidst a din that they are used to.

Kohli might be coming off the most tepid run with the bat in recent times — a string of low scores in the Tests against Australia and surprisingly measly returns in the IPL — but there’s hardly any mention of bad form or fear about the Indian captain not being at his best going into the tournament. If anything, he’s expected to be one of the highlights. Michael Hussey, former Australia batsman, in fact stuck his neck out and insisted that those doubting Kohli might end up “eating humble pie”.

That being said, for once, India might actually be going into an ICC event with more talk about its bowling stocks and its stability than how they are spoilt for batting riches. Rohit Sharma didn’t have a great IPL and you never know which Shikhar Dhawan will turn up in international cricket — the cocksure, moustache-twirling aggressor or the jittery out-of-place pretender.

With MS Dhoni still not looking his best, the batting stocks below Kohli in the order don’t look as settled as usual. Yuvraj Singh, whose recall to international cricket was based totally on Champions Trophy selection, and Kedar Jadhav had career-defining series against England but questions remain.

Stronger bowling suit
The bowling, on the other hand, has perhaps never looked stronger. R Ashwin and Ravindra Jadeja were stars with the ball when India won this event four years ago, and this was before the two became the scourge of every opposition batting line-up in the world. There are few attacks in the world as well-balanced as India’s when it comes to the pace department though.

There’s the genuine pace and new-found confidence of Umesh Yadav, which was just finding its feet in 2013, and Mohammed Shami – like he showed against the Kiwis – is back to his fiery best with the new ball. Bhuvneshwar Kumar is at least two yards quicker than he was four years ago, and the captain doesn’t have to worry about having to use up all his overs with the new ball. He’s developed into one of the best death bowlers India has ever had. Then there’s Jasprit Bumrah, who is not only even more devastating than Kumar in the final powerplay with his variations but also has an action whose novelty doesn’t seem to wear off and continues to cause trouble for batsmen even if they feel they’ve got used to it.

There is also Hardik Pandya, who has ended up on certain days as India’s quickest bowler on show. As headaches go — of the selection variety, that is — this will be one that the Indian management and selectors will hope lingers on, where they can just rub their temples on and off to get the right combination and subsequent relief. On Sunday at Edgbaston, it won’t once again be a case of India’s batsmen vs Pakistan’s bowlers. It will instead be India’s well-balanced outfit against their arch rivals’ untested and unsung XI.

It’s likely that there wouldn’t have been a Champions Trophy now if India hadn’t won it four years ago. When Ashwin kept James Tredwell to a bye and MS Dhoni jumped around uncharacteristically at Edgbaston, India were expected to be the final holders of 50-over cricket’s secondary world title.

For, at that point the ICC had scrapped the tournament. And it was the unexpected success, in terms of crowd attendances and interest, of what was supposed to be the final edition, and India’s victory, that prompted the sport’s powers that be to retain the Champions Trophy for at least an encore. And like last time, and most times that India play overseas these days, for Kohli & Co it will still feel like home even if they will be away playing on a corner of a foreign field.