IND vs SA 2nd T20 Highlights, India vs South Africa 2nd T20I Match Ball-by-Ball Commentary: Sent in to bat, India posted a massive 237 for three, riding on a solid batting display by the top four and then returned to restrict the visitors to 221 for 3 in the stipulated 20 overs. 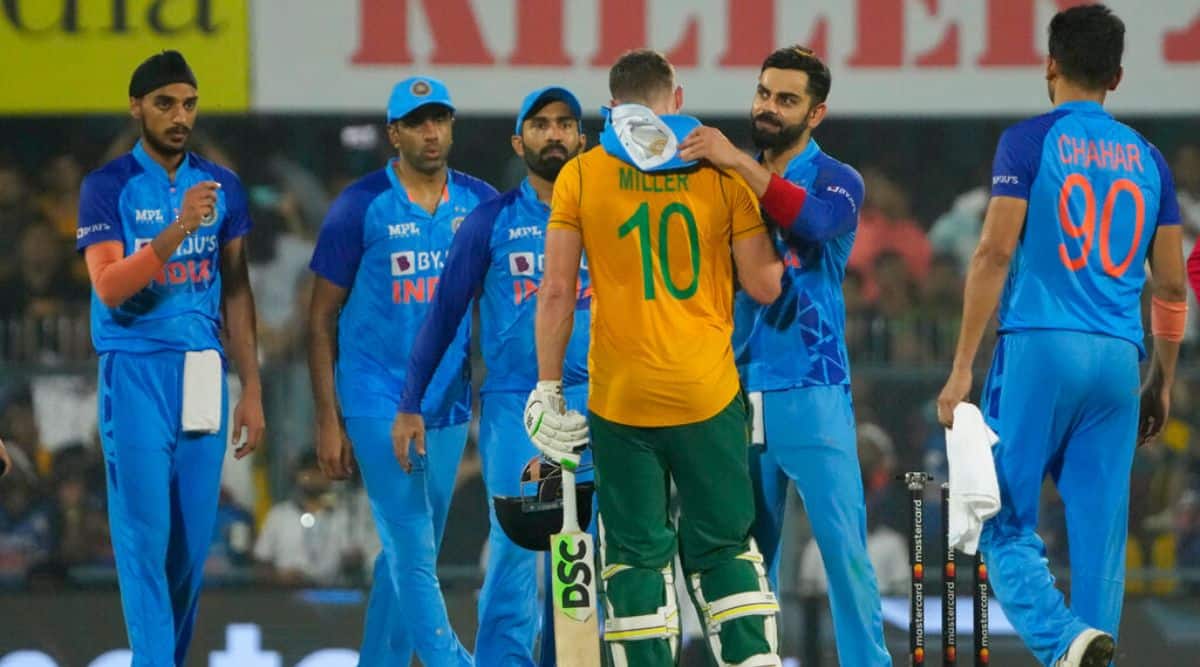 India vs South Africa 2nd T20 Match Highlights: India defeated South Africa by 16 runs in a high-scoring second T20I to take an unassailable 2-0 lead in the three-match series on Sunday. Sent in to bat, India posted a massive 237 for three, riding on a solid batting display by the top four and then returned to restrict the visitors to 221 for 3 in the stipulated 20 overs. Quinton de Kock (69 not out) and David Miller (106 not out) did the bulk of scoring for the visitors.

KL Rahul (57) and Rohit Sharma (43) put on a 96-run opening stand to set the foundation for India at the Barsapara cricket stadium. Suryakumar Yadav (61) then took centre stage as he smashed five boundaries and as many sixes en route to his 102-run stand off just 40 balls with Virat Kohli (49 not out). Dinesh Karthik then made some lusty blows in his seven-ball 17 not out.

Keshav Maharaj (2/23) was the most successful bowler for South Africa but it turned out to be a disastrous day for the rest of his bowling colleagues. For India, Arshdeep Singh (2/62) and Axar Patel (1/53) were the wicket-takers.

Follow highlights of IND vs SA from Guwahati below.

Sandeep Dwivedi: Quinton de Kock and David Miller are known Indophiles. Between them they have represented 7 IPL franchise teams - Sunrisers Hyderabad, RCB, MI, Lucknow Super Giants, Gujarat Titans, Rajasthan Royals and Kings XI. They are friends with most in the Indian team - they have shared dressing rooms and team hotels with them. Being senior members of their IPL sides, they have been part of team core groups that have hatched plans against all the regulars of the Indians team. With about 7 overs to go in the chase, the two had to score close to 18 runs - three sixes - per over to win for South Africa. In the next over they did manage three. Since India is their second home, almost like their backyard, they knew the conditions. They are well aware that no run-mountain is tough to conquer when in India. They were up against Arshdeep, Axar, Harshal Patel, Deepak Chahar - all sly bowlers in the business of conning big hitters in death overs. And that made the difference. In the last 5 overs they needed to score 20 per over, in the final 3 overs it was 24. In the final over it was 37. Six sixes and a no-ball - Indians had bowled many during the game. If not 6, they did hit 3 and South Africa fell short by 16 runs. The two men, who knew India like the back of the hands, couldn't pull it off. But they did run them close.

Even for the brilliance of David Miller and Quinton de Kock, it was a little too much for South Africa. India win the 2nd T20I by 16 runs and take an unassailable 2-0 lead in the three-match T20I.

David Miller brings up his second T20 hundred in just 46 deliveries. What a sight he has been on the night!

India vs South Africa Live Score and Updates: SA just won't give up!

26 runs off Arshdeep Singh's 19th over. David Miller has brought the equation from 63 off 12 balls to 37 needed off the last six. The Indian players are in a huddle. Axar Patel has the bowl. Quinton de Kock on strike.

India vs South Africa Live Score and Updates: Another good over for India!

Harshal Patel only concedes 11 and the equation is now 63 needed off 12 balls. Even for the biggest of cricket romantics this can go only one way now.

India vs South Africa Live Score and Updates: Good last over from Chahar!

Even though it was far from the most economical over he has bowled tonight (which was a maiden), Deepak Chahar's final over with only eight runs conceded is one India would welcome with open arms. The equation becoming more improbable for the visitors. 164/3 after 17 overs.

India vs South Africa Live Score and Updates: 100 partnership up!

Quinton de Kock also gets his fifty and even though South Africa need 82 off the last 24, with these two in the middle, India won't be able to breath easy. 100 partnership up as well. South Africa, 156/3 after 16 overs.

Quinton de Kock has grinded his way to a 12th career T20I half century, coming off 39 deliveries#INDvSA #BePartOfIt pic.twitter.com/u0THUzZ5cH

India vs South Africa Live Score and Updates: de Kock amping it up!

After scoring 33 off 34, Quinton de Kock has put his foot on the throttle. A pull for a six over deep mid-wicket, a slog over cow corner for a six and smash down the ground for four. 18 off the 15th over, South Africa are 143/3.

Fifty off 25 deliveries for David Miller. Crucial for Proteas that he sees this through all the way. With de Kock at 29 off 31 balls, he'd have to play the aggressor role like a dream wuth 113 required to win off the last 36 balls.

25 balls is all that David Miller needs to bring up a sixth T20I half century#INDvSA #BePartOfIt pic.twitter.com/0tHtohx0li

David Miller overtakes JP Duminy (1934) to become South Africa's highest run scorer in the format. Next in the tally is Quinton de Kock (1918*), also in the middle.

Harshal Patel in to bowl the 12th. 2 runs from the first 2 balls. The fourth and the fifth ball goes for back to back fours. Killer Miller at his best here. SA 83/3 after 11 overs

Ashwin in to bowl the 10th over. Good over thus far. Just 4 runs from the first 5 balls. The last ball ends with a dot as we are halfway through. SA 70/3 after 10 overs

On to the 9th over now and Axar will bowl this one. South Africa batters are struggling at the moment. 3 runs from the first 3 balls before de Kock hits a boundary off the 4th ball!! SA 66/3 after 9 overs

India vs South Africa Live Score and Updates: OUT!!!!

Axar strikes!!! Markram is gone. Makes room and he gets an outside edger which rattles his stumps. South Africa lose 3 wickets in quick fashion. SA 48/3 after 6.4 overs 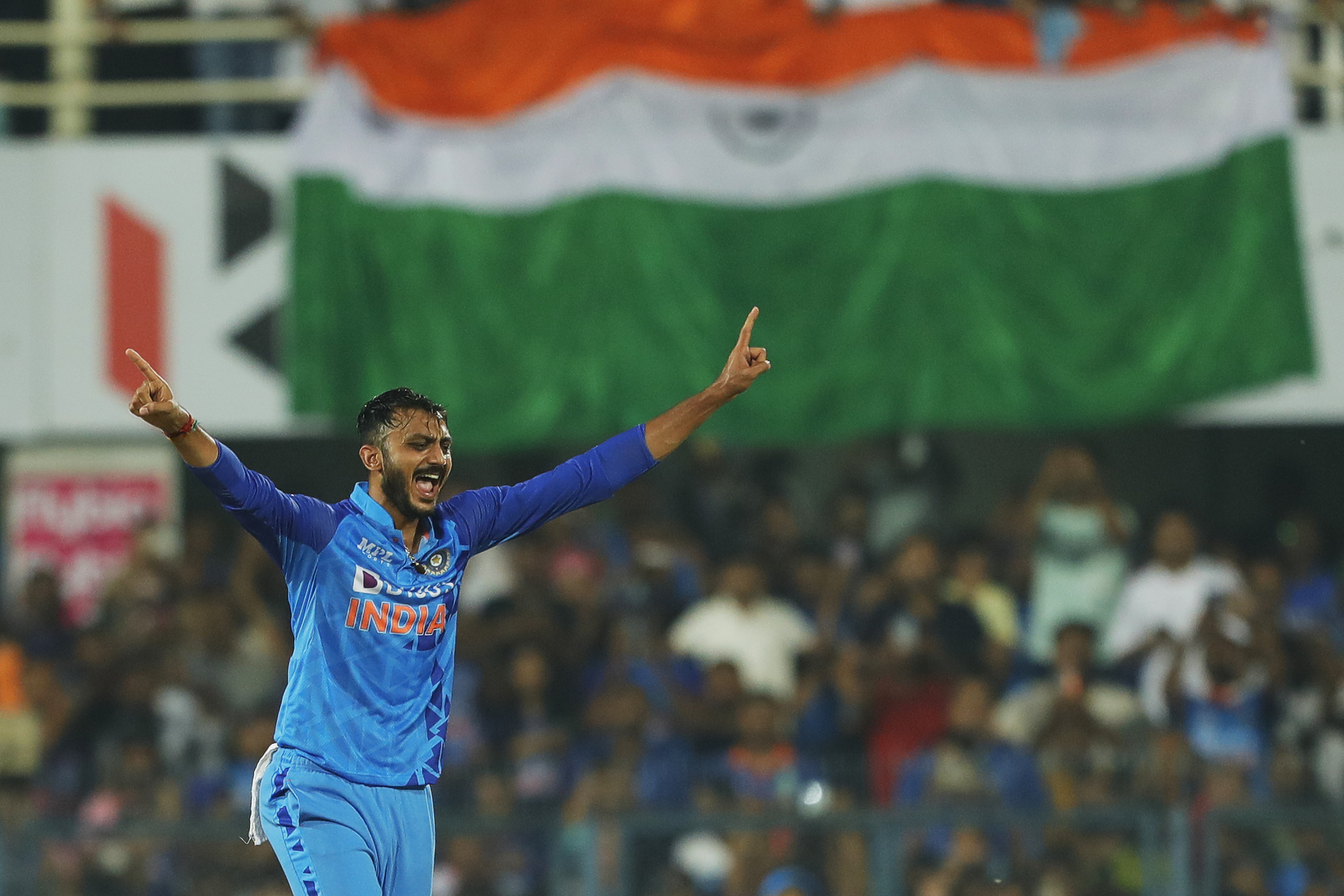 India vs South Africa Live Score and Updates: Over no. 3 for Chahar in PP!

Rohit Sharma as India captain, much like MS Dhoni at CSK, has trusted Deepak Chahar to bowl a third over in powerplay very often. Doesn't get a wicket on the night but has kept the runs coming in tough for the visitors. After five overs, SA are 29/2.

India vs South Africa Live Score and Updates: Ashwin into the attack!

Ravichandran Ashwin gets the new ball. Decent first over with just two wides and a boundary conceded, keeping Markram at bay for the majority of it. South Africa 21/2 after four overs.

Chahar offers extra bit of width to Markram, who takes the gift and gets his first boundary of the night. Eight off the over. South Africa, 15/2 after three overs.

Alright then, good news from the middle. The players are back on the field and the lights are back on.

Okay, this is unusual. One of the light towers has stopped resulting in the play being paused for the moment. It is highly unlikely that India would make any changes in their playing XI for the second T20I against South Africa in Guwahati. But at the same time, one can’t ignore the fact that the duo of Rohit Sharma and Rahul Dravid like to experiment. With Jasprit Bumrah out injured and Mohammed Shami still recovering from Covid-19, the Indian think tank might give Mohammed Siraj some game time.

For South Africa, there will be immense pressure on captain Temba Bavuma, who is struggling with the bat. And on the other hand, Reeza Hendricks, who has scored four fifties in the last five innings, is warming the bench. To include Hendricks in the top order, South Africa might drop Rilee Rossouw and bring in Dwaine Pretorius for Wayne Parnell. (Read More)