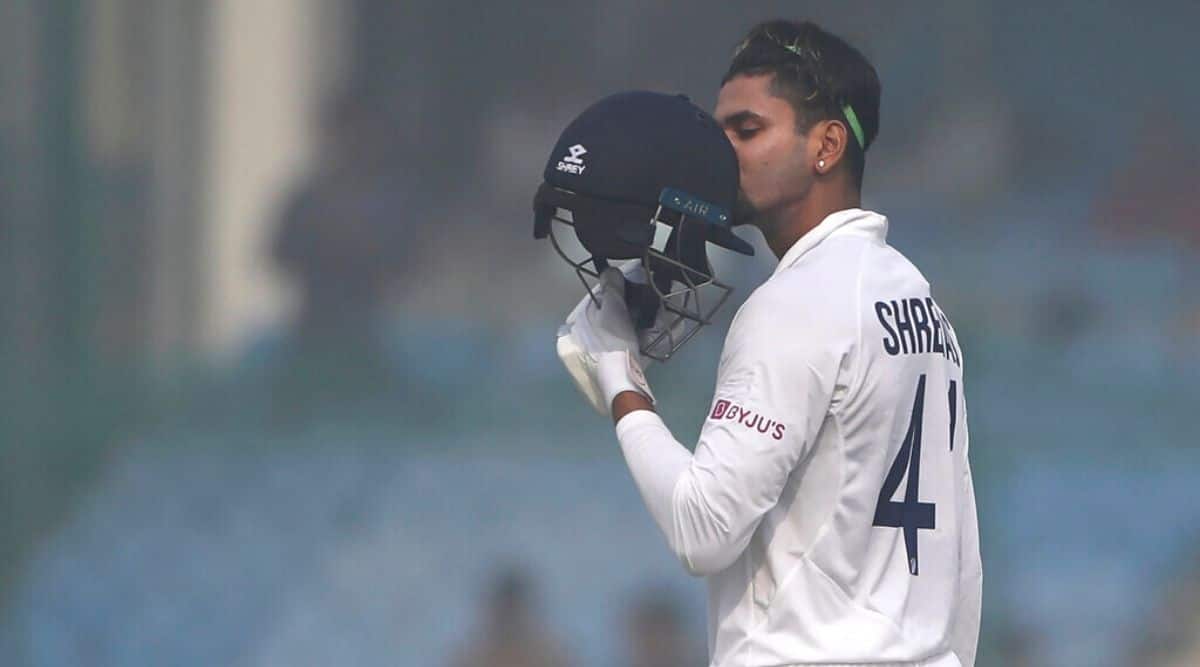 Shreyas Iyer kisses his helmet after scoring a century during the day two of their first test cricket match with New Zealand in Kanpur, India, Friday, Nov. 26, 2021. (AP Photo/Altaf Qadri)

“He looked at me and said, ‘nahi, nahi red-ball ek din khelna hai. Aur sirf khelna nahi hai, lamba khelna hai’ [No, no, I want to play red-ball someday. And not just play, but play for a long time].”

Iyer has achieved stardom on the basis of his exploits in white-ball cricket. He’s led Delhi Capitals in the Indian Premier League (IPL) with some success, and has represented India 54 times across ODIs and T20Is. Amid all this, the fact that he has also played the same number of first-class matches — with more than four-and-a-half thousand runs at an average of 52.18 – has slipped under the radar in recent times.

Shreyas Iyer gets to his maiden Test ton as #TeamIndia post 339/8 at Lunch on Day 2.

On the day he became only the 16th Indian to make a hundred on Test debut at Green Park in Kanpur, it is pertinent to recall that his red-ball career had kickstarted at the same ground seven years ago. Having made 7, 1 and 11 in his first-class career until then, Iyer came in at 53/5 — which soon became 57/6 — and blasted 75 off 78 to revive Mumbai to 270 against Uttar Pradesh.

And he did so wearing borrowed clothes from team-mate Aditya Tare, as he had forgotten his own kit at the hotel. “It was a chilly winter. You ask any cricketer, unke zindagi mein aisa ek time aaya hoga [there would have come a time in their life] when they would have forgotten their dress in the hotel. Shreyas took clothes from Tare and scored his first half-century in Kanpur. It was a much-needed one because in his first two games he hadn’t scored any runs,” says India and Mumbai team-mate Shardul Thakur, who took nine wickets in the same match.

“From 2014 to 2018, Iyer often found himself walking in during the second or third over of the game. He scored in all conditions and succeeded,” Thakur says. “He was desperate to play red-ball cricket. He is not the one who will crib. He will talk less. Whenever he was not picked, he used to say, ‘tu dekh main aur achha karunga’ [You see I’ll perform even better]. He never lost his hopes and continued his hard work.”

That desperation Thakur talks about gave way to a phase during which Iyer told this paper three years ago that he had become “emotionless.” He had convinced himself that he wanted to enjoy his life in the present instead of obsessing over when he would get his opportunity.

“Mazaa karna hai [I want to have fun]. I don’t want selection issues to rule my happiness. Otherwise I would get frustrated and thinking about the future will ruin my present also. It’s better to enjoy life. Selection is a temporary thing,” Iyer had said.

All along, one thing that has stood out about Iyer is his unflinching self-belief, irrespective of the stage of his career, and irrespective of what the world thinks about him. “I see myself as a very big batsman. I have visualised and made it my vision a long time back,” he had said during the same conversation in December 2018. 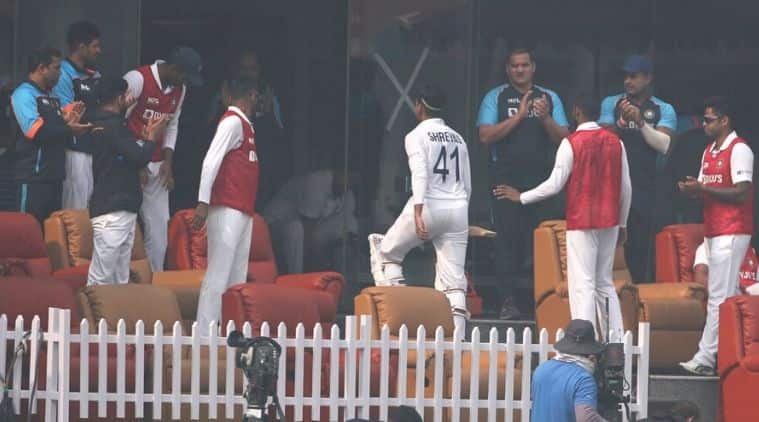 Shreyas Iyer receives standing ovation as he is back in the pavilion after being dismissed by New Zealand’s Tim Southee during the day two of their first test cricket match in Kanpur, India, Friday, Nov. 26, 2021. (AP Photo/Altaf Qadri)

He has rarely shied away from speaking his mind. Earlier that year in March, just four months after he had made his India debut, he had declared that he deserved more chances in the Indian team.

“I should get a long run. I have done that much performance so obviously I deserve it,” he had told this correspondent in Dharamsala, where he was leading India ‘B’ in the Deodhar Trophy.

Just a bit earlier, a week after he had made his India debut in November 2017, Iyer turned out for Mumbai against Baroda in the Ranji Trophy. Battling a 404-run first-innings deficit, Iyer arrived with minutes to go for stumps on the third evening, with the field set for the bouncer. He went on to attack nearly every short ball he faced, and succumbed for just 8. Next day, Lad played out 238 balls to defy Baroda and earn a draw.

Iyer was predictably panned for his approach. But he had felt attack was the way to go, and would later tell someone in the Mumbai set-up that even the football great Zlatan Ibrahimovic had to face criticism.

That remarkable faith in his approach has carried him at a first-class strike-rate of 80-plus. Even on the slow and low Green Park track, after walking in at 106/3 and losing his captain at 145/4, Iyer’s debut Test innings came at a strike-rate of 61.40.

After he ended Day One on 75 off 136, former Mumbai coach and wicketkeeper-batter Vinayak Samant had told this paper that Iyer would race to his hundred on the second day. Iyer needed only 21 balls in the morning to move from 75 to 100.

Samant says that once Iyer has assessed the conditions, he has the game to be able to bat as he pleases across formats. “The basic difference is that in white-ball cricket, you have to look to hit, and in red-ball, you have to play late. It is not easy, of course, but if you get that very basic sense right, you will perform across formats. And Shreyas has that sense,” Samant says.

“He gets into good positions more often than not. His bat does not burst forward. He controls the bat-swing, and that is what helps him do well. Plus, his head position is also largely stable. He is mentally pretty strong, and understands his game very well now.”